Iraq ballot warehouse up in flames before election recount

Officials suggested the fire at Baghdad's largest ballot storage site was deliberate. Earlier this week, Iraq's parliament ordered a manual recount of the May vote amid allegations of fraud. 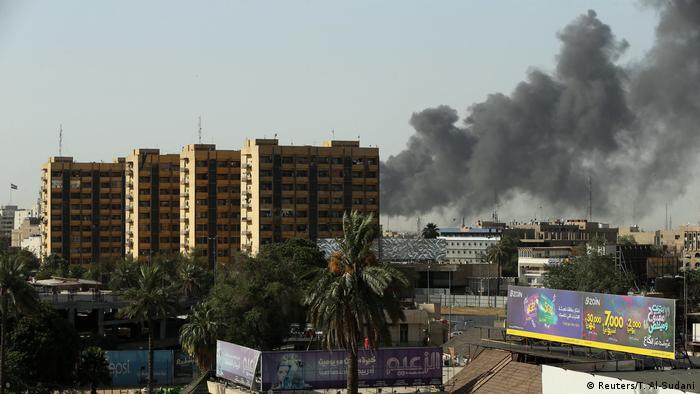 A fire raged through Baghdad's largest ballot storage site on Sunday, just days after the Iraqi parliament ordered a recount of May's election results amid accusations of fraud.

Iraqi Prime Minister Haider al-Abadi called the fire "a plot to harm the nation and its democracy."

"We will take all necessary measures and strike with an iron fist all who undermine the security of the nation and its citizens," Abadi said in a statement.

The fire was confined to one of four warehouses in Baghdad's al-Russafa district, where 60 percent of the capital's 2 million eligible voters had cast their ballots.

The Interior Ministry said no ballot boxes were destroyed in the fire, which engulfed a warehouse containing vote-counting machines and other election equipment. 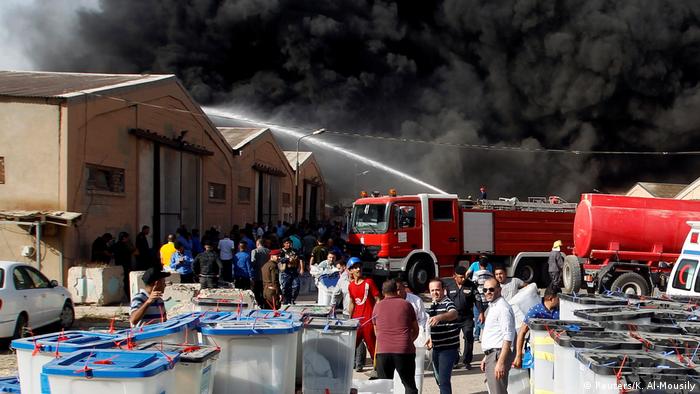 Firefighters at the Baghdad storage center

Iraq's Independent High Elections Commission had used electronic vote-counting devices for the first time in the May 12 election.

Some of the allegations of fraud have centered on tests of electronic voting machines, which produced varied results.

Abadi's government on Tuesday said an investigation found serious violations and blamed the elections commission for most of them. The parliament ordered a manual recount the next day.

Abadi's bloc came in third in the election, which was marked by low turnout.

Outgoing parliamentary speaker Salim al-Jabouri, who lost his seat in the election and was one of the more outspoken proponents of the recount before the fire, called for fresh elections.

"The crime of burning ballot box storage warehouses in the Russafa area is a deliberate act, a planned crime, aimed at hiding instances of fraud and manipulation of votes, lying to the Iraqi people and changing their will and choices. We call for the election to be repeated," he said.

Sadr aide Dhiaa al-Asadi described the fire as a plot designed to force a repeat of the election and hide fraud.

"Whoever burned the election equipment and document storage site had two goals: either cancelling the election or destroying the stuffed ballots counted amongst the results," he tweeted, suggesting some were trying to sabotage Sadr's gains.

He has been called an anti-American militant, a cross-sectarian reformer and a new hope for Iraq. From waging war against US troops to winning big at elections, DW explores the evolution of Muqtada al-Sadr. (14.05.2018)

Early counts show Muqtada al-Sadr has become the unexpected frontrunner. The cleric led the insurgency against US troops after 2003 and later became a strong critic of corruption in Iraq's political system. (14.05.2018)

Just under half of Iraq's voting population cast a ballot to choose 329 parliamentarians. Higher turnout was observed in areas that were freed from "Islamic State" occupation. (13.05.2018)