Iran's president has dismissed the only female minister in his cabinet. Health Minister Marzieh Vahid Dastjerdi was the first and only woman to have held a ministerial position in the Islamic Republic's 34-year history. 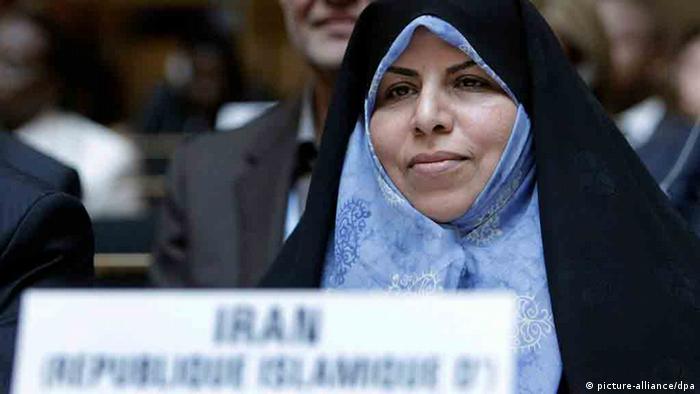 According to Iranian state television, Ahmadinejad sacked his health minister on Thursday, after she called for the price of certain medicines to be hiked. Dastjerdi had proposed the hikes in response to the sharp depreciation of the Iranian currency, the rial, as a result of Western sanctions related to Iran's controversial nuclear program.

The president, who has sought to downplay the economic effects of the sanctions, had fiercely opposed any price hikes. In a short statement he said he had appointed Mohammad Hassan Tariqat Monfared as interim head of the ministry.

Dastjerdi was appointed in 2009 as the only female government minister to have served since the Islamic revolution of 1979. Trained as a gynecologist, she became an advocate for women's rights in Iran.

Last month she criticized authorities for failing to provide funds to import vital medicines. She said only a quarter of the $2.4 billion (1.8 billion euros) earmarked for medicine imports had been provided in the current year and there was a shortage of foreign currency for the shipments.

Although Iran manufactures 97 percent of the medicines it uses, many of their ingredients are imported and recent reports have suggested shortages of critical medicines for the treatment of cancer, multiple sclerosis, blood disorders and other serious conditions.

In August the shortages prompted the head of the Foundation for Special Diseases, Fatemeh Hashemi, to appeal to the UN Secretary General Ban Ki-moon to urge the west to ease the crippling sanctions. Ahmadinejad's government has also come under fire within Iran over claims it has exacerbated the effects of the sanctions through poor management and cronyism.

The United States and the European Union fear that Iran is seeking to develop a nuclear weapon, although Tehran asserts that its nuclear program is for peaceful purposes only.