Iran tests missiles just one day after US sanctions

Several missiles were deployed during a military exercise, in defiance of new US sanctions on Iranian interests. Tehran and Washington are again at loggerheads, just 18 months after a landmark nuclear deal. 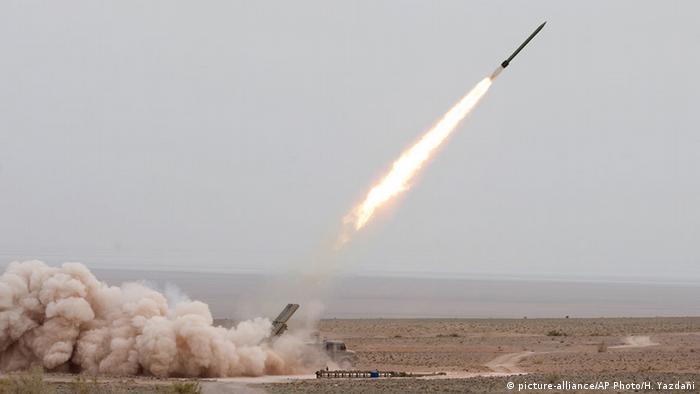 Saturday's maneuvers by Iran's elite Revolutionary Guards took place over a 35,000-square-kilometer area in the northeastern province of Semnan.

"Different types of domestically produced radar and missile systems, command and control centers, and cyber warfare systems will be used in this exercise," the Guards' website said.

The war games aimed to demonstrate Iran's "complete preparedness to deal with the threats" and "humiliating sanctions" from Washington.

But the tests involved very short-range missiles capable of striking targets up to 75 kilometers (47 miles) away.

Iran appeared to ignore warnings from US President Donald Trump, who put Tehran "on notice" that he wouldn't be as "kind" as the Obama administration had been in his dealings with Iran.

In a continued show of defiance, a senior Revolutionary Guard commander warned that its missiles would strike the country's enemies if they do wrong.

Gen. Amir Ali Hajizadeh, chief of the Guard's airspace division, said, "If the enemy does not walk the line, our missiles [will] come down on them."

Despite the military rhetoric, the country's vice president on Saturday urged calm heads to prevail.

"These are worn-out accusations against Iran and even the [accuser] himself is ashamed of saying it," state news agency IRNA quoted Eshagh Jahangiri as saying.

"If this nation is talked to respectfully and issues are resolved through negotiations and dialogue... it can be a win for everyone," he added.

Iran insists its missile test was only for defensive purposes and not a violation of the United Nations Security Council 2231 resolution or the 2015 nuclear deal with international powers.

US Defense Secretary Jim Mattis said on Saturday he was not considering raising the number of American forces in the Middle East to address Iran's "misbehavior," but he also warned that the world would not ignore Iranian activities.

Burundi: Ex-president gets prison term for killing another former president 5h ago