Iranian-Canadian Hossein Derakhshan was a dissident blogger, but he became outspokenly pro-Ahmadinejad. In November 2008, he returned to Iran and was subsequently arrested. He was sentenced to 19.5 years in jail. 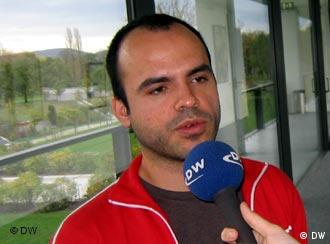 An Iranian court has sentenced Iranian-Canadian blogger Hossein Derakhshan to 19.5 years in prison, according to Iranian media.

The conservative website, Mashreghnews.ir, which is close to Iran's presidential office, said Derakhshan was convicted on charges of cooperation with hostile countries, spreading propaganda against the ruling establishment, promotion of counterrevolutionary groups and insulting Islamic thoughts and religious figures.

Verdict can be appealed

He was also given a five years' ban from membership in political parties and activities in the media, and was sentenced to returning received funds in the amount of 30,750 euros, $2,900, and 200 British pounds.

Derakhshan can appeal, the report added.

Before the verdict, immediate family members as well as Reporters without Borders had feared Hossein Derakhshan may be threatened with death penalty.

The Iranian blogging pioneer has been held in a Tehran prison for nearly two years and has been given little, if any, access to legal representation and no consular access to Canadian authorities. In recent days, family members had said that the prosecutor was seeking the death penalty for Derakhshan.

Ten years ago, Hossein Derakhshan moved from Iran to Canada to study. That's where he met his wife, who is also from Iran, and became a Canadian citizen.

In 2001, from his base in Toronto, Derakhshan penned an online guide teaching Iranians how to blog in their own language and championed Persian blogging from both inside and outside of his homeland.

Dubbed by some as "the blogfather," Derakhshan was frequently interviewed by Western media outlets about the nascent Iranian blogging community and his blogs in both English and Persian.

As he continued at the time, he also became an outspoken critic of Iran's religious leadership.

Blogging from Toronto, and later Paris and London, under the pen name "Hoder," Derakhshan criticized Iran's elite as being inflexible and unwilling to engage in reform, while attacking Ayatollah Khamenei directly in his writing.

In 2005, he served as a jury member in Deutsche Welle's Best of the Blogs awards.

The following year, he made a very public trip to Israel, which is normally forbidden for Iranian citizens.

"I'm going to Israel as a citizen journalist and a peace activist,” he wrote on his English blog at the time. "I'm a citizen of Canada and I have the right to visit any country I want." 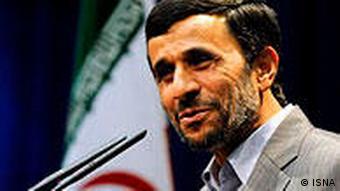 Mahmoud Ahmadinejad called for a swift resolution to Derakhshan's case

A change of views

Later that year, Derakhshan suddenly switched his political perspective and became a staunch nationalist and defender of the Islamic Republic.

In 2006, Derakhshan wrote an opinion piece defending Iran's nuclear program in The Washington Post. He also began to attack activists and former friends on his blogs and in other media. Later he told The Guardian newspaper in vehement words that if the United States attacked Iran, he would return and fight for his homeland.

After visiting Israel, Derakhshan moved to London to pursue graduate studies. That's when he went from making oppositional statements to outright supporting the new president.

He went on rhetorical rampages against many who had previously been his friends and colleagues and later was even sued for libel in the United States in 2007.

In the fall of 2008, before Derakhshan returned to Iran, he asked his friends to not take a public stance if he was arrested.

Derakhshan had returned to Iran in late 2008, apparently having secured a job offer at Press TV, the country's English-language news service, but was arrested two weeks after his arrival. Iranian President Mahmoud Ahmadinejad himself asked for a swift resolution to the case. 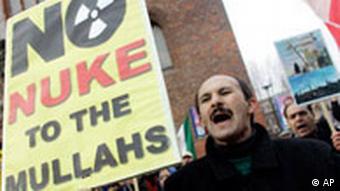 Derakhshan defended Iran's nuclear program in the face of protests

However, little is known about his current situation. A brief statement made three months ago by Tehran accuses him of insulting the prophet Muhammad along with Iran's spiritual leader and president, as well as disseminating "anti-revolutionary propaganda" and spying for Israel.

Derakhshan's mother told an expatriate Iranian news website, Kamtarin.com, that she has visited her son in prison. His physical and mental conditions are worrisome.

Unlike other possible death penalty cases in Iran, the customary wave of popular solidarity failed to materialize behind Derakhshan, although there has been some attention online and in the Canadian media. Even the mayor of Paris, Bertrand Delanoe, rallied to his support in a statement on his website.

"In the name of Paris, I solemnly call upon the judicial authorities of Tehran to not condemn Hossein Derakhshan to death," he wrote last week. "And I invite the mobilization of all of our energies to save this honorable, courageous and dignified life."

But Derakhshan's political stance and relationship to Ahmadinejad remains clouded.

Iranian authorities have not accepted Derakhshan efforts to invoke his rights as a Canadian citizen.

"Despite the Iranian government’s position, we consider Mr. Derakhshan to be a Canadian citizen," wrote Lisa Monette, a spokesperson from the Canadian Department of Foreign Affairs and International Trade, in a statement sent to Deutsche Welle.

"We will continue to press the Iranian authorities for access, as we have in similar cases involving dual nationals in other jurisdictions. Canada continues to urge Iran to fully respect all of its human rights obligations, both in law and in practice."

Iranian authorities have arrested numerous bloggers in recent years in a bid to clamp down on Internet dissent.

European and US delegations have walked out of the UN General Assembly in protest during a speech by the Iranian president. Meanwhile US President Obama called for work on a solution to the Israeli-Palestinian conflict. (24.09.2010)

The winners of the 2005 Deutsche Welle International Weblog Awards couldn't be any more diverse. They include freedom of expression activists, blog illustrators, podcast pirates and an overweight woman. (21.11.2005)

More German companies are ending their business relations with Iran. (24.9.2010)