Iran rocket launch condemned by Germany, France, UK and US

Iran has insisted its satellite-bearing rocket did not violate the nuclear deal, but western nations disagree. They have said last month's launch was a 'threatening and provocative step.' 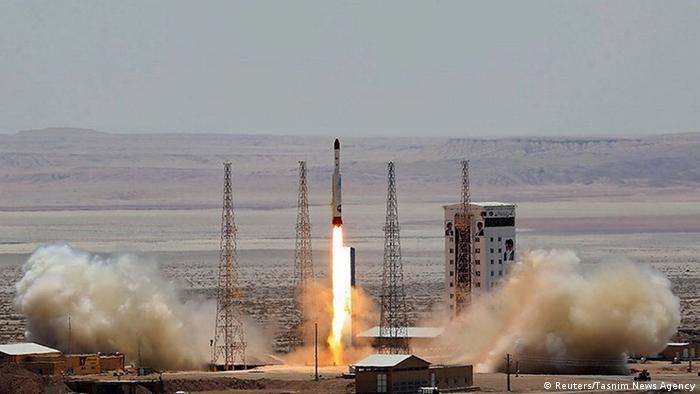 Germany, France, Britain and the US jointly condemned Iran's July 27 satellite launch in a letter to the United Nations sent Wednesday.

The allies said Iran's rocket launch was inconsistent with the terms of the nuclear pact signed by Iran in July 2015.

"The Simorgh is a space launch vehicle that, if configured as a ballistic missile, would have a range of well over 300 kilometres (185 miles) and has enough payload capacity to carry a nuclear warhead," the letter to the UN Security Council read.

Read more: Iran vows to continue missile program as tensions with US flare

"This launch therefore represents a threatening and provocative step by Iran." The letter was sent by US Ambassador Nikki Haley on behalf of the four countries.

Haley posted a copy of the letter on Twitter.

The rocket was the country's most advanced satellite-carrying rocket to date, marking the most significant step forward for Iran's young space program. Tehran's launch was followed by the US imposing sanctions on six companies that Washington said were linked to the missile program.

"Iran's longstanding program to develop ballistic missiles continues to be inconsistent with UN Security Council Resolution 2231 and has a destabilizing effect in the region," the letter read, referring to the resolution that endorsed the landmark 2015 nuclear deal between Iran, Britain, China, France, Germany, Russia and the US.

That resolution lifted sanctions in exchange for curbs on Iran's nuclear program. In the resolution Iran is "called upon" to refrain from launching missiles capable of delivering nuclear weapons.

The four Western allies called on UN Secretary-General Antonio Guterres in the letter to "report fully and thoroughly on Iran's ballistic missile and space launch activity."

Not a violation, Iran claims

Iran has repeatedly said that it has not violated the resolution and is not trying to develop nuclear weapons. Iranian Foreign Minister Mohammad Javad Zarif denied on Friday that his country had missiles designed to carry nuclear warheads.

The ministry said on Saturday that it will continue "with full power" its missile program and accused the US administration of seeking to weaken the nuclear deal. US President Donald Trump has often condemned the nuclear deal with Iran, which has been defended by US allies.

Russia's new UN Ambassador Vassily Nebenzia told reporters on Wednesday that the launch "is not a violation of the agreement."

Is Russia sabotaging the Iran nuclear deal over Ukraine sanctions? 09.03.2022

Despite progress in the negotiations to restore the 2015 Iran nuclear deal, the accord's future is at stake after a last-minute Russian demand for an exemption from Western sanctions.