Protesters in Tehran have clashed with police, while authorities were reported to have shot two people in a western Iranian town. Earlier, hard-liners held their own rallies in support of the religious establishment.

Thousands of people took to the streets across Iran on Saturday, as anti-government protests continued for a third day.

Several videos on social media showed demonstrations in the capital Tehran and other major cities, with protesters shouting slogans critical of the government and Supreme Leader Ayatollah Ali Khamenei.

At least two people appear to have been shot by state security forces in the western town of Dorud, according to news agency Reuters, while riot police surrounded Tehran University.

The rallies are some of the largest in the Islamic Republic since anti-government protests following the country's disputed 2009 presidential election.

Saturday's protests follow similar rallies on Thursday and Friday. Dozens of people were arrested during clashes with police in the cities of Mashhad, Rasht, Hamedan, Kermanshah, Qazvin and elsewhere.

Many protesters have complained that reforms promised by President Hassan Rouhani have failed to significantly improve the Iranian economy since he took office in 2013. 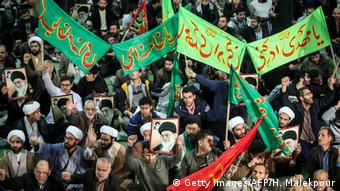 Official inflation stands at around 10 percent, while prices have surged in recent months for basic goods and foodstuffs. Unemployment has remained high and the government recently announced cuts to welfare and increases in fuel prices.

Protesters have also criticized corruption and the country's involvement in regional conflicts, including the financial and military backing of Syrian President Bashar Assad.

In response to the growing anger, Iran's Interior Minister Abdolreza Rahmani Fazli on Saturday cautioned the public not to participate in "illegal gatherings," saying they would "create problems for themselves and other citizens."

Other Iranian ministers quickly blamed the US and other outside forces for the latest unrest. Hard-liners suggested the new wave of protests could be the work of counter-revolutionaries, while reformers blamed a small group of hard-liners who they said were trying to harm the government.

Earlier Saturday, hard-liners held their own rallies to mark the defeat of the last major protest movement in 2009. Iranian cities saw tens of thousands of government supporters hold pre-planned rallies to mark the eighth anniversary of a crackdown on mass public unrest that followed the disputed election.

State television showed footage of crowds of hard-liners in the capital, Tehran, while many carried banners in support of Khamenei in Iran's second largest city, Mashhad. 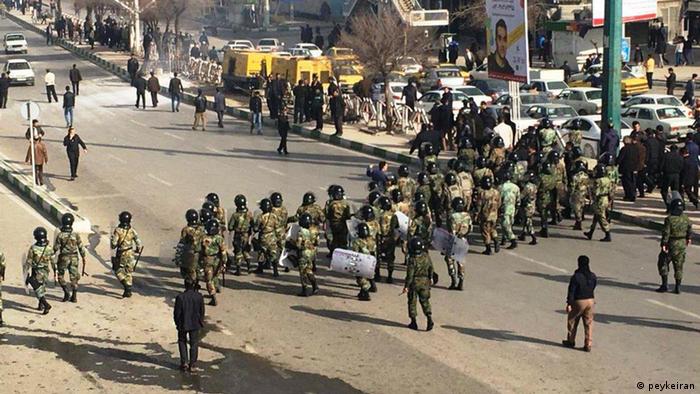 On Twitter, US President Donald Trump warned Iran's leaders that "the world is watching," in what appeared to be a veiled threat to deter a similar crackdown to the one that took place following the disputed 2009 election.

"Many reports of peaceful protests by Iranian citizens fed up with regime's corruption and its squandering of the nation's wealth to fund terrorism abroad," he wrote, adding that the Iranian government "should respect their people's rights, including [the] right to express themselves."

Trump's comments echoed a US State Department statement on Friday accusing Iranian leaders of turning "a wealthy country with a rich history and culture into an economically depleted rogue state whose chief exports are violence, bloodshed and chaos."

Iran's foreign ministry said Trump's support for the protesters was "deceitful and opportunist."

"Counterrevolution groups and foreign media are continuing their organized efforts to misuse the people's economic and livelihood problems and their legitimate demands to provide an opportunity for unlawful gatherings and possibly chaos," state TV said.

In 2009, dozens of people were killed and more than 4,000 arrested when Iran's elite Revolutionary Guards and its Basij militia spearheaded a violent crackdown against reformers, who were angry at what they said was an election stolen by then-President Mahmoud Ahmadinejad.

The Iranian president has urged Saudi Arabia to end its war in Yemen and sever alleged ties with Israel to improve relations with the Islamic republic. Iran and Saudi Arabia have witnessed relations nosedive since 2016. (10.12.2017)

US President Donald Trump is expected to take a step toward scrapping the nuclear accord with Iran by "decertifying" Tehran's compliance the landmark deal. It's part of what some expect to be a harder US line with Iran. (06.10.2017)

Under Emmanuel Macron, France has sought to regain power and influence in the region. Amid escalating tensions, Iran's president suggested France play a key role by taking a "realistic" approach to emerging crises. (21.11.2017)