Iran: Rights groups decry planned execution of Iranian-Swedish citizen | Asia | An in-depth look at news from across the continent | DW | 16.05.2022

Diplomats and agencies have called the espionage charges against Ahmad Reza Jalali unfounded. Some experts speculate that his sentencing is in retribution for the trial in Sweden of former Iranian official Hamid Nouri. 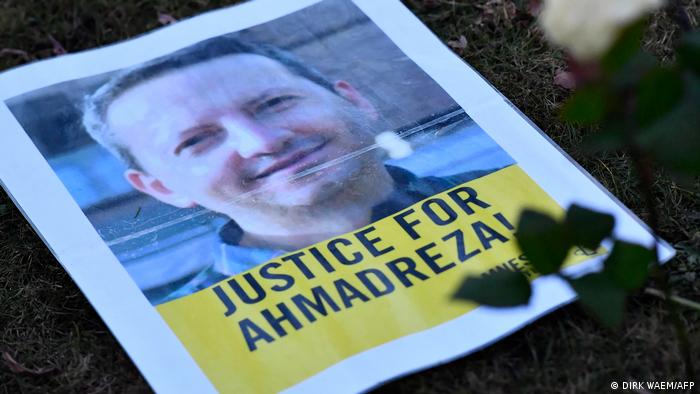 Human rights organizations and relatives have denounced the recent announcement of the date for the execution of Iranian-Swedish citizen Ahmad Reza Jalali. Vida Mehrannia, Jalali's wife, is calling for his return to Sweden. Some experts have pointed to possible retribution for the trial in Sweden of former Iranian official Hamid Nouri.

"Ahmad Reza has not been allowed any direct telephone contact with us in Sweden since November 2020," Mehrannia told DW.

Mehrannia, like the representatives of several human rights agencies, believes her husband is innocent and that his trial was completely unfair.

Quoting "informed sources," Iranian Students' News Agency reported on May 4 that Jalali's death sentence would be carried out by May 21. Iran's government had sentenced the disaster medicine doctor to death on allegations of espionage for Israel.

Some experts believe the sentence was issued in retaliation for the trial taking place in Sweden of Hamid Nouri, a former Iranian official who has been implicated in the mass execution of dissidents. The death sentence was announced on the last day of Jalali's trial.

Swedish prosecutors have demanded life in prison for Nouri on charges of involvement in the 1988 executions of Iranian political prisoners, as well as for "committing war crimes and premeditated murder."

Maja Aberg, of Amnesty International Sweden, said she believed that the announcement of Jalali's execution was directly related to Nouri's case. "It indicates that [Iran] sees him as a kind of piece in the jigsaw puzzle, which is very worrying," she told Sweden's TT news agency.

Meanwhile, Iran has claimed that its actions against Jalali have nothing to do with Nouri's case.

"His lawyer went to the Evin Prison's Prosecutor's Office to see if the news was true — and it was," Mehrannia said.

She said Jalali's mental and physical condition had worsened after hearing the news of the execution and he had lost 30 kilograms (66 pounds) from his original weight of 81 kilograms.

Mehrannia said their family was also struggling to process the news, and that the couple's 10-year-old son was unaware of his father's death sentence and had only recently learned that his father is imprisoned in Iran.

"My children should not have experienced such days. My 19-year-old daughter has been informed of her father's death sentence and is worried and upset by this unjust sentence," she said.

Earlier this month, Swedish Foreign Minister Ann Linde tweeted that the reports that Iran may carry out the death sentence were "very worrying."

"Sweden and the EU condemn the death penalty and demand that Jalali be released. We are in contact with Iran," she said.

Mehrannia said the Swedish government had not done enough for her husband.

Although she has met with Belgium's foreign minister and members of the Italian Parliament, she said she had not been able to meet with Swedish officials face-to-face over the past six years.

In May, Mahmud Amiri Moghadam, of the Norway-based Iran Human Rights Organization, told Radio Farda that Jalali's sentencing shows that "the Islamic republic is using Jalali as a hostage" to pressure Sweden over the Nouri trial.

"We demand the international community and specifically European countries to clarify the ramifications of such an execution," he said, referring to the "hostage-taking" of Jalali as a punishable international crime.

Jalali was arrested when he was visiting Iran in April 2016, following an invitation from the University of Tehran and Shiraz University.

Two weeks later, he faced charges of espionage, treason and collaboration with Israel. Jalali, a researcher and Karolinska Institute alumnus, is accused of "assassinating two nuclear scientists" by providing "information about the Islamic Republic's nuclear program to Mossad."

On October 21, 2017, the Revolutionary Court in Tehran sentenced Jalali to death. According to reports, his lawyer was not allowed to be present in the court and he was denied access to the case files. Appeals for judicial review of the sentence have been rejected.

His death sentence has been widely protested by human rights organizations both inside and outside Iran. "Jalali's situation is truly horrific," UN human rights experts said in a statement in March. "He has been held in prolonged solitary confinement for over 100 days with the constant risk of his imminent execution laying over his head."

Additionally, Iranian political prisoners Houshang Rezaei and Farhad Meysami, have gone on a hunger strike in Evin and Rajaei-Shahr prisons to protest Jalali's verdict, saying they will continue to strike until the death sentence is overturned.

"We denounce the actions of the Iranian authorities in the strongest terms, as well as their complete inaction despite our constant calls for him to be immediately released," the UN statement said. "The allegations against him are completely baseless and he should be allowed to return to his family in Sweden as soon as possible."