The US Secretary of State and his Iranian counterpart have met on the last day of the Munich Security Conference on its last day. The face-to-face came just ahead of the next round of talks on Iran's nuclear program. 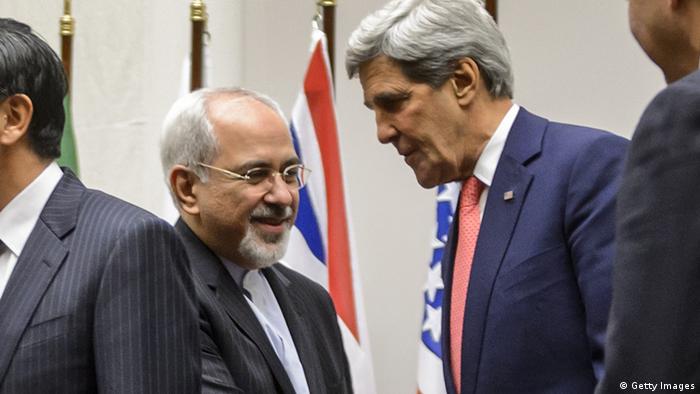 Shortly before the Munich Security Conference drew to a close on Sunday, US Secretary of State John Kerry and Iranian Foreign Minister Mohammad Javad Zarif took a break from scheduled engagements amid ongoing efforts to resolve conflict over Iran's nuclear ambitions, the US State Department said.

She added that no details of the talks were immediately available. However, news agency Reuters cited a State Department official as saying Kerry told Zarif existing US sanctions remained in place.

"Secretary Kerry reiterated the importance of both sides negotiating in good faith and Iran abiding by its commitments under the Joint Plan of Action. He also made clear that the United States will continue to enforce existing sanctions," the official said.

Western powers imposed a series of crippling sanctions on Iran amid fears it was seeking to develop a nuclear weapon. These were partially lifted following talks in November when Iran signed an accord with the five permanent members of the UN Security Council, plus Germany, where it agreed to halt its most sensitive nuclear operations and open its program to wider inspections.

The accord was officially implemented on January 20 and will last for six months while further negotiations on a permanent agreement are held. During this period the United States and EU have pledged to impose no further sanctions.

Representatives from Iran, the United States, China, Russia, Britain, France and Germany will meet again in Vienna on February 18 for the next round of talks aimed at reaching the final agreement.

Germany's security conference, which ended on Sunday afternoon, was largely dominated by concerns over anti-government protests in Ukraine.

On Saturday boxing-champion-turned-opposition-leader Vitali Klitschko said the government had failed to meet protesters' demands, calling for a return to the country's 2004 constitution, which would sharply curtail President Viktor Yanukovych's power. He also demanded that the government release detained activists and hold elections as soon as possible.

Ukraine Foreign Minister Leonid Koschara dismissed the opposition's accusations, saying the government had "fulfilled all of the key demands of the opposition," adding that it was time for the opposition to "take on responsibility, too."

Koschara also defended the government's decision not to sign an association agreement with the EU in November, citing the economy's probable collapse had the government not opted instead for a $15-billion (11-billion-euro) loan from Russia.

Yanukovych's decision to pull out of the agreement and improve ties with Moscow was the initial trigger for mass protests. Clashes have turned violent in recent weeks, resulting in the deaths of several protesters.

The Ukrainian opposition won't stop fighting until the government makes concessions, according to leader Vitali Klitschko. The remarks were made at the Munich Security Conference, which has focused on the Ukraine crisis. (01.02.2014)

Despite subzero temperatures and police raids, volunteers have organized to keep Kyiv demonstrators warm, fed and safe - while defying the government's central authority. (31.01.2014)

Ukraine's parliament has voted to give amnesty to arrested protesters on the condition they vacate all occupied government buildings. Opposition politicians boycotted the vote, calling for amnesty without conditions. (29.01.2014)