Iran frees US hikers after two-year ordeal | World| Breaking news and perspectives from around the globe | DW | 21.09.2011

Iran has released two American hikers who were jailed as 'spies' in 2009 and sentenced to eight years in prison. The high-profile drama has severely strained America's already fragile relations with Iran. 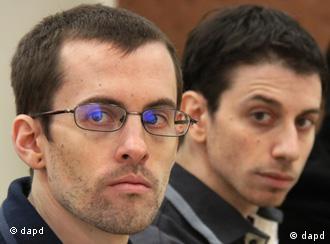 American hikers Josh Fattal and Shane Bauer were freed on bail in Iran on Wednesday after more than two years in prison. According to news agency Reuters, the two men were flown out of Tehran bound for the Gulf state of Oman.

Iran agreed their release after receiving $500,000 (363,000 euros) for each in bail ending a two-year showdown with the United States. Witnesses said they were escorted from the notorious Evin prison for Tehran's airport by a convoy of Omani officials and Swiss diplomats.

Family members of Fattal and Bauer, both 29, are waiting to be reunited with them in Oman's capital, Muscat.

The men were arrested in 2009 alongside fellow hiker Sarah Shroud and sentenced to eight years in prison on charges of espionage after crossing over the Iranian border.

Shroud, who became engaged to Bauer while in prison, was released in September last year on health grounds and permitted to fly home.

All three have maintained their innocence throughout, claiming that they had accidently strayed into Iran while hiking in Iraq's relatively peaceful Kurdistan region. The US government also denied that the three Americans were spies.

Iran's President Mahmoud Ahmadinejad hinted last week that the men would be freed "in a couple of days," in a "humanitarian" gesture ahead of his annual trip to the United Nations. Their fate had, however, remained uncertain until the last minute.

The case has deepened the already strained relationship between the United States and Iran.

Oman, which has close relations with Tehran and Washington, has been acting as a mediator in the men's releases and is thought to have paid the bail for all three hikers.

Iran jails US hikers as spies for eight years

Iran has sentenced two American hikers to eight years each in prison for illegal entry and spying for a US intelligence agency. Washington, which vehemently denies the claims, is calling for the men's release. (20.08.2011)

After months of apparent inactivity, Russia appears to have put to good use its relations with Tehran to re-start negotiations between Iran and the 5+1 powers over the Islamic Republic's contentious nuclear ambitions. (17.08.2011)

An Iranian atomic researcher who disappeared in Saudi Arabia and spent a year in the US is back in Tehran. Now, observers are puzzling over a conflicting - and confusing - trail of accusations and video evidence. (16.07.2010)