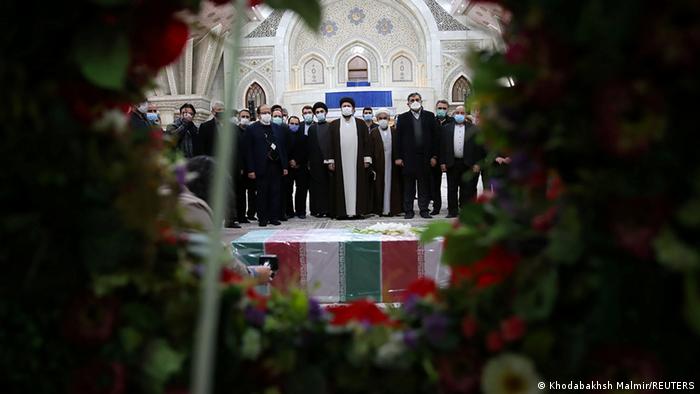 Iran on Monday held a funeral service for the scientist who founded the country's military nuclear program, and repeated previous claims that the assassination had been carried out by Israel.

Meanwhile, the defense minister said Iran would continue Fakhrizadeh's work "with more speed and more power." Hatami referred to the killing as a "heinous assassination."

The funeral began with a religious singer praising Fakhrizadeh, whose coffin was covered with the Iranian flag. An honor guard carried the coffin containing his body.

The socially-distanced funeral was held in an outdoor part of the Iranian Defense Ministry in Tehran and was closed to the public.

Israel, which is alleged to have killed several Iranian nuclear scientists over the past decade, has declined to comment on the attack. According to the defense ministry, Fakhrizadeh died after assailants targeted his car and engaged in a gunfight with his bodyguards outside Tehran.

Fakhrizadeh, who was a member of Iran's Islamic Revolutionary Guard, is believed to have led Iran's nuclear program, which Israel and the West have claimed was a veiled military operation to construct a nuclear weapon. Iran has long maintained that its nuclear program is peaceful.

There were debates on Sunday over how to respond to the assassination. Parliament demanded a halt to international inspections of the country's nuclear sites by the International Atomic Energy Agency.

Read more: President Rouhani hopes for 'easy' return to pre-Trump relations with US

The nuclear watchdog has conducted an unprecedented examination of Iran's civilian nuclear program after the country's 2015 non-proliferation deal with global powers.

One official hinted that the country should leave the treaty. However, Iranian President Hassan Rouhani has said Iran will have its revenge but will not be rushed into a "trap."

Iranian media have reported that Mohsen Fakhrizadeh, said by Israel to have led a secret military nuclear program, has been assassinated by "terrorists." Tehran has pointed the finger at one of its regional adversaries.