Interview: Why we need the Millennium Consumption Goals | Asia| An in-depth look at news from across the continent | DW | 14.09.2011 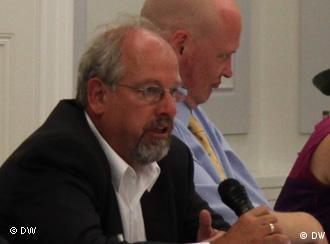 Deutsche Welle: To what extent can the Millennium Consumption Goals (MCGs) be seen as being set apart from Millennium Development Goals (MDGs)?

Dr. Philip Vergragt: The MDGs are all about poor people in developing countries that need to be taken out of poverty and illness and so on. The idea behind the MCGs is that the richest 20 percent of the people on the globe, which is mainly in the north, but also the rich people in developing countries, all consume 80 percent of the world's resources. So if we as rich people would mitigate, reduce our consumption, everybody would benefit. Poor people would benefit and the planet would benefit as well.

What are the goals and what can people – consumers, producers and governments – do?

Well consumers can start to think about their lifestyles. It could be things like consume somewhat less meat, drive in smaller cars or share the cars. Don't expand your houses, but maybe live in somewhat smaller spaces. Governments can do a lot in terms of getting rid of bad, perverse subsidies, as we call them, for instance for oil companies, by subsidizing good behavior and green products and setting rules and regulations about what should be produced and what should not be produced. And also in their buying behavior, in public procurement. Basically, if governments start to buy green stuff for their operations, then there would be an enormous demand for green products and services. Businesses obviously can do a lot. But businesses will only do it when consumers buy it. And then the public media can play a role. There should be responsible advertising and labeling certification to create consumer awareness.

Many people, especially consumers in the United States, the largest consumer world-wide, equate choice and consumption with democratic rights. How will it become clear that imposing guidelines for sustainable consumption is not an infringement on the people’s freedom?

Yes, the United States is the biggest consumer on earth, both in terms of numbers of people as in terms of levels of consumption. And yes, you are right, the American dream and self-image is about freedom to consume and to live their lives in the way they want. So that’s an enormous challenge. But research in the last 10, 20 years on wellbeing tells us that material consumption does not make us any happier. Of course, you need to fulfill your basic needs in housing, transportation, food and communication, etc. But above a certain level, and this level is actually quite low, increased material consumption is not correlated with happiness. So what does make us happy? The things that are important for happiness are good health, good relationships, mostly immaterial things, and security. And in America, for instance, there is a very high level of insecurity. People are insecure about their health insurance, about college education for their children and about their old age – much more so than in Europe. So they think that they need to earn a lot of money in order to give them a more secure feeling and this earning more money leads to competition and eventually leads to more material consumption. So the question is how to communicate it? To communicate the message: "consume less" is of course not going to work. So the message should be a positive message, like, "improve your wellbeing," "become happier," and "consume more responsibly" and also a message of solidarity with other people of the world and with the environment.

What about insecurity in Asian countries like China and India? It sounds like the problems will grow and it will become all the more difficult to get the message out on a personal level.

It is not easy for individuals to change their lifestyles. If you analyze the problem, it is really what we call a systemic problem. It is a problem about the production of goods, so businesses are involved. It is an issue of regulation, so the governments are involved. It is an issue of culture: what do my neighbors say, what do my peers say, what is considered to be "cool." It is a status question.

But the capitalistic system is set up on growth and profit, isn’t it? So how would the system you are suggesting look?

If you think about the idea of shortening the working week, which has many benefits, you can share the same amount of jobs with more people. Another thing is that people would have less disposable income. But if they have more security, they can miss that income and they would free up time for things that are important for them – for their family and their community. And there is also a whole movement in Europe now called self-provisioning – where people grow their own food and do their own repairs and are more active in community work.

You have these ideas, like shortening the working week, but on the other hand, recent technological advancements to create cost-effectiveness and workforce efficiency by staff reduction and atomization is a trend contrary to that kind of idea. In many sectors of the economy you see that going on, a lot of people are out of work and being laid off, companies are downsizing and trying to make themselves more competitive. How do you counter that?

Technological innovation is a good thing and it will continue to automate things and get rid of things that we don't want to do manually. But what is becoming more and more clear is that technological innovation alone cannot take us out of this crisis. So we have things for instance like the rebound effect, where if we make lighting more efficient, people will put more lights in their gardens or in their houses. So technological innovation is a very good thing and it also saves us labor that we don't want to do but it will not solve our problems alone. We need it, but we also need a change in mentality and lifestyle. There are a lot of needs in society that go unfulfilled. Things like caring for other people, making neighborhoods safe, and so on. And in the present society, this is often unpaid labor and there is nothing against making that into paid labor.

Now that the West is developed and has reached a certain level of comfort and consumption, doesn't it seem a bit unfair to start telling developing countries, we need to slow it down and consume more responsibly? Won’t developing nations feel like they are getting the short end of the stick?

Yes, absolutely. And of course, we should be the last ones to say to developing countries: "you cannot grow." So the way to look at it, I think, is to set another example that is compelling for the rest of the world so that the rest of the world will say, "wow, we also want to live like these new style Americans or these new style Europeans." And that is basically the idea of the Millennium Consumption Goals.

The development goals are supposed to be reached by 2015. Do you think that seems likely? And also: is there any kind of time frame that has been set for the consumption goals?

The timeframe for the consumption goals is, I think 2030, now. But that is all still under discussion. We think you cannot just say that a bunch of governments or a bunch of NGOs are going to decree top-down: these are consumption goals. Nobody would buy that. We don't have a lot of time left because we just overcame the first financial crisis. Just around the corner is the big oil crisis. The climate crisis is looming. Then we have a whole pick of other things that may become scarce. And of course, population is growing and developing countries are becoming richer. Biodiversity is going down. And especially for climate change, the window of opportunity is pretty small. So we actually cannot afford to wait too long.

The world's resources are dwindling. Experts say the world's richest 20 percent will have to look at their lifestyles and consumption habits and make some changes in order to secure a safe and sustainable future. (14.09.2011)

Nepal's new prime minister brings some hope for the future

Nepal's new Prime Minister Baburam Bhattarai from the Maoist party is the country's fourth in three years. He is a beacon of hope for the small south Asian country wedged between arch-rivals China and India. (07.09.2011)