Jean-Marie Guehenno, International Crisis Group CEO, says that if Europe wants to protect the NATO alliance, it has to increase defense spending. He spoke to DW on the sidelines of the Munich Security Conference. 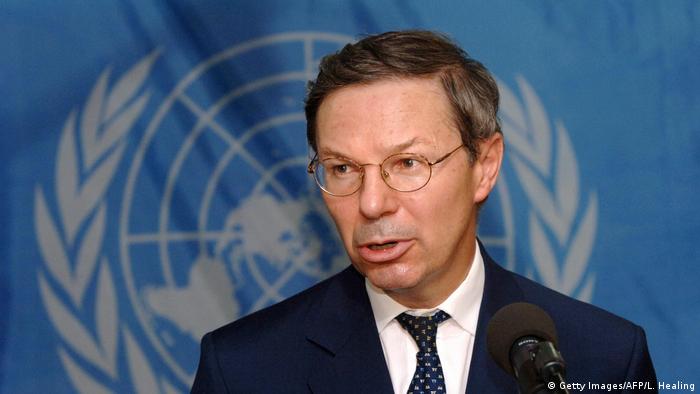 Guehenno was the UN's head of peacekeeping operations for eight years

Guehenno: I think they are not going to really find a fundamental agreement. On that specific example you mentioned, I think in some parts of the US administration there is the idea that the fear of Iran will bring together the Arab countries and the US, and including on the Palestinian issue that the Arab countries will become less sensitive to the question for instance of Jerusalem as the capital of Israel. I think that is not going to happen. More broadly on the question of common ground I think today there is a need more than ever for dialog because there are gaps opening. Not just the ones you mentioned in the Middle East but also between Europe and the United States, on the role of the United Nations. So we see that what has been the glue, the motor that sticks the world together, that motor is really fragmented, it's being destroyed. And it's essential in a world that has global issues where cooperative management of these issues is necessary. Dialogue is essential at a minimum. That's the beginning of finding common ground, even if it is not yet common ground. Guehenno participated in a panel focused on Africa on Friday

When you look at the program, which is shifting ground, what is the podium speech or discussion that you're looking forward to the most.

Well, of course it will be very interesting to see what the representatives of the US administration have to say. I hope they will engage in a conversation because we need more than statements. We need dialogue. I think the people who are coming probably want to reassure the Europeans. We need to be specific on what the US engagement in Europe is. Is it a transactional engagement or is it something that is fundamental to US values, to US core interests? This is something we want to hear.

Von der Leyen kicked off the international security meeting by calling for a more globally committed United States. She said Germany needed to shoulder a greater burden of responsibility in NATO. (17.02.2017)

The new US Defense Secretary James Mattis has been touring Europe in recent days. He arrives in Munich on Friday. We have been hearing a lot about the US demand for the Europeans to increase their defense budgets. But doesn't that run the risk of maybe antagonizing Russia even more? And won't arms spending increase the chance of conflict?

I think the Europeans over the years have not been serious enough to be frank on defense. And I wrote an article recently on that. So I think raising defense spending in Europe considering all the threats that Europe is confronted with, I think that is necessary. But on your question on the relation with Russia, I think we also need to have parallel an approach on arms control negotiations. That's because we see that the agreements that were made at the end of the Cold War - whether it is the intermediate nuclear forces agreement or the agreement on the conventional forces in Europe - all these agreements are at risk of unraveling. And so I would agree that rather than engaging in a big arms race, it would be important to shore up such agreements. We have seen recently deployment of Russian Cruise Missiles that are a violation of the intermediate nuclear forces agreement. Let us discuss it to reverse that. But I think for such a negotiation to have a chance to succeed the Europeans have to show that they also committed to their own defense.

Jean-Marie Guéhenno is a former French diplomat and former UN Under Secretary-General for Peacekeeping Operations (2000-2008). Now he is CEO of the International Crisis Group, an NGO with a focus on preventing wars and shaping policies that will secure a more peaceful world.