Indonesia is undergoing a rapid transformation from a rural to an urban economy, with the nation's cities growing faster than in other Asian countries, says a new report. What challenges does this trend pose? 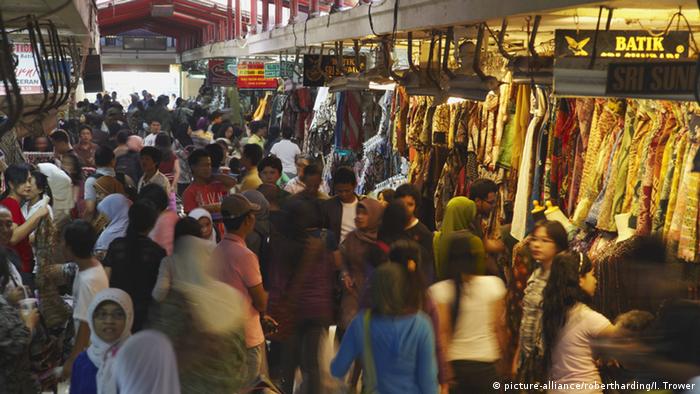 Cities in Indonesia are expanding at a rate of 4.1 percent per year, the report stated. It also estimated that by 2025, in less than 10 years, about 68 percent of the Southeast Asian nation's population would be living in urban areas.

The country's urbanization is among the fastest in the world, with the size of its urban land increasing by around 1,100 square kilometers between 2000 and 2010 – second only to China.

However, such masses of people moving from villages to cities present not only opportunities but also a multitude of challenges such as growing congestion and worsening pollution levels.

The study revealed that only 48 percent of urban households now have access to safe water, compared to 50 percent over a decade ago. Meanwhile, sewerage coverage exists in just 11 of the nation's 98 cities and only two percent of city dwellers have access to centralized sanitation systems.

Indonesia has a severe infrastructure problem and the cities are already stretched, says Paul Rowland, a Jakarta-based independent political analyst.

"Housing is already at a premium as land prices have skyrocketed in the past decade and government cannot keep up with the demand for housing in what are already some of the world's most densely populated urban areas," he told DW.

"Urban sprawl and unregulated development in the suburban areas of Jakarta and Bandung have also resulted in landslides and more downstream flooding," Rowland added.

The country's weak urban infrastructure is an outcome of decades of underinvestment, experts say, stressing that insufficient investments leave many communities vulnerable to poverty.

In a bid to accelerate growth and draw foreign investment into the country, Indonesia recently announced a major opening of its economy. DW takes a look at the proposed measures and their implications. (18.02.2016)

Dozens of people have disappeared after torrential rain caused landslides to sweep across villages in Indonesia's central region. Authorities have sent rescue teams to disaster-hit areas to search for survivors. (19.06.2016)

Indonesian authorities are preparing to tow a stranded boat carrying dozens of Sri Lankan migrants out to international waters. The vessel was on its way to Australia when it broke down off Aceh last week. (17.06.2016)

Money for Asia: No big deal

Developing countries in Asia require huge sums of money to develop their infrastructure. The money's there, yet investors are still reluctant. DW's Andreas Becker reports from the ADB's annual meeting in Frankfurt. (03.05.2016)

While Indonesia's economy expanded by an average of 5.8 percent in the mid to late 2000s, its infrastructure stock rose by just three percent. In contrast, China's spending on infrastructure over the past decade amounted to around 10 percent of its economic output.

"The lack of infrastructure capital is clearly a major constraint, especially in large metropolitan cities, which are stagnating while small cities lack in their delivery of basic services," says Sumedh Deorukhkar, Asia economist at BBVA Research.

Recognizing the need to respond to the nation's infrastructure deficit, the Indonesian government has ramped up its spending in recent months.

"The government over the past year has announced a spate of measures aimed at enhancing consumer purchasing power as well as boosting investment activity and industrial competitiveness," Deorukhkar noted.

This is particularly important to deal with the challenge of promoting industrialization and creating enough jobs in urban areas to absorb the fast-growing numbers of workers.

If Indonesia is successful in industrializing its economy and boosting industrial output for both the fast-growing domestic consumer market and for exports, this will result in strong migration flows of rural workers into cities, Biswas said. "Indonesia's future industrialization and urbanization will occur in tandem."

A failure to effectively plan and manage the process of urbanization would lead to tremendous economic and social troubles, warn experts. The problems include sprawling urban slums, high rates of unemployment, poverty and crime.

Rowland believes increasing urbanization has had an impact on politics in the country's urban areas. He says, in the past few years, voters have elected reformers to head Indonesia's three largest cities and they are making a difference by improving services and beginning to tackle longstanding issues like traffic, flooding and pollution.

"With increasing urbanization, it is to be hoped that the identity and crony politics of the past will begin to lose sway."