Foreign Minister Retno Marsudi scrapped the trip after protesters said the visit would legitimize the recent coup. She is currently on a tour of ASEAN states to discuss a solution to Myanmar's unrest. 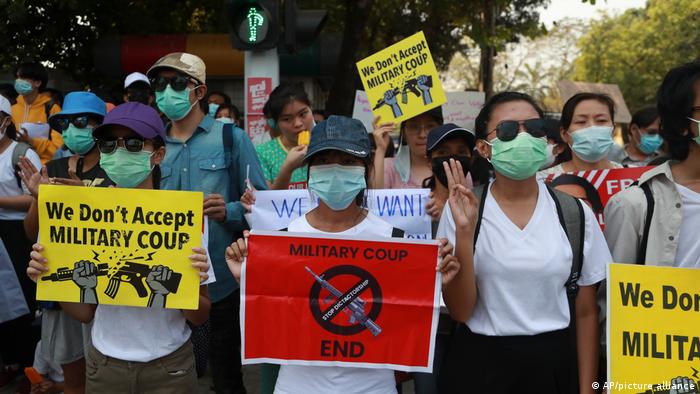 Demonstrators protest close to the Indonesian Embassy in Yangon, Myanmar on Tuesday

Indonesian Foreign Minister Retno Marsudi has cancelled a visit to Myanmar following opposition to visiting the country, where the army recently seized power in a coup, the Foreign Ministry said on Wednesday.

"After taking into account the current development and the input of other ASEAN countries this is not the ideal time to conduct a visit to Myanmar," Indonesian Foreign Ministry spokesman Teuku Faizasyah told a news briefing.

Marsudi has been touring member states of the Association of Southeast Asian Nations (ASEAN) to seek a common stance on the February 1 military coup in Myanmar, which has sparked nationwide street protests and international condemnation.

Marsudi also visited Thailand on Wednesday, meeting both of her counterparts as part of her ASEAN tour to discuss the situation in Myanmar.

Myanmar's Foreign Minister Wunna Muang Lwin held talks with Marsudi and his Thai counterpart, Don Pramudwinai, in what was the first known face-to-face meetings between a senior member of Myanmar's junta and foreign governments.

"We didn't plan on it but yes," Tanee wrote in response to a question asking about a meeting between the three ministers. Another government source told AFP there was "a tripartite meeting between Indonesia, Thailand and Myanmar ministers, proposed by Thailand." No details were released on the discussions.

Myanmar activists opposed to the coup had urged Marsudi to cancel the trip, which was scheduled for Thursday, saying that it would legitimize the military government.

Hundreds of anti-coup protesters rallied outside the Indonesian embassy building in Yangon on Tuesday, after media outlets reported that Indonesia was seeking an agreement with other ASEAN members to agree on a proposal regarding new elections in Myanmar.

Demonstrators demanded that the votes they cast in November be recognized, instead of holding a new election.

The plan centered on the member states sending monitors to ensure the generals follow up on their promise to hold fair elections. Faizasyah said, however, that such a proposal "does not exist."

"That is not Indonesia's position, because our focus is on how to reach a peaceful settlement in Myanmar that is inclusive and involves all parties," Faizasyah said.

The military has not offered a time frame for a new election, but imposed a one-year state of emergency when it seized power, so the vote would likely be after that if it does take place.

The move to cancel Marsudi's trip came as Myanmar prepared for more street protests against military rule. This week saw large rallies and a general strike on Monday to demand the release of elected leader Aung San Suu Kyi.

Indonesia is the most populous country in ASEAN, which also includes Brunei, Cambodia, Laos, Malaysia, Myanmar, the Philippines, Singapore, Thailand and Vietnam.