What Indonesia′s labor reforms mean for workers′ rights, the environment | Asia | An in-depth look at news from across the continent | DW | 08.10.2020

What Indonesia's labor reforms mean for workers' rights, the environment 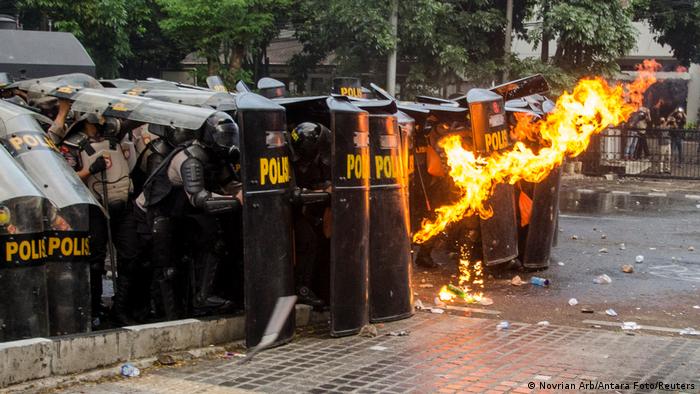 Thousands of Indonesians have taken to the streets this week to protest President Joko Widodo's so-called Omnibus Bill on Job Creation — a new piece of legislation that slashes regulations contained in more than 70 separate existing laws to open up the country to more foreign investment.

With seven of the nine political parties represented in parliament in favor of the 905-page stimulus measure, lawmakers smoothly passed the bill on Monday.

The legislature had initially planned to consider the bill at the end of the week but calls from some 32 labor unions for a three-day national strike starting Tuesday to oppose it prompted the government to speed up the vote.

Labor activists and environmentalists have come together in an unlikely alliance to protest the cut in regulations on businesses which they say would come at a high cost to workers and the environment.

"We are very disappointed and devastated with the House of Representatives and the government for openly displaying a lack of empathy and no ethical sense in the legislative process," Riden Hatam Aziz, secretary general of the Confederation of Indonesian Workers Union, told DW.

"Needless to say this is tremendously embarrassing in a country that is reputedly a democracy," said Aziz.

The Indonesian government hopes the measure will accelerate reform in the country's economy, make it more business friendly and stimulate investment and job creation.

Indonesia, Southeast Asia's largest economy, has been among the nations hit hardest by the coronavirus pandemic and is facing recession.

With the economy expected to contract this year for the first time since the Asian financial crisis of the late 1990s, Widodo is set on pushing ahead with measures to ensure the country's economic recovery, despite rising COVID-19 infections.

Indonesia has registered at least 307,000 coronavirus cases with more than 11,000 related deaths. Health experts, however, warn many more cases and deaths have gone unreported.

Supporters of the new law say it will draw in more investors as it eliminates many permit requirements and would speed up approval of projects.

"We needed a simplification, synchronization and to cut red tape," said Chief Economics Minister Airlangga Hartarto. "The jobs creation law will drive regulatory reform so that the government can deliver services in a more efficient way," he added.

Willy Aditya, a Nasdem Party politician and deputy chairman of Indonesia's House Legislation Body, told DW that the bill was introduced to eliminate obstacles for US and Chinese investment.

"There has been a lot of investment shifting from China and the US, but Indonesia doesn't get any of it because we have complicated business license and over-regulation problem," he said.

But financial services company Citibank stated in a research note that immediate foreign investment following the legislation was unlikely due to the currently depressed global economic climate.

Millions of workers at risk

The bill also cuts mandatory paid leave, permits the hiring of contract and part-time workers in place of full-time employees, and allows for the expansion of outsourcing schemes. It removes the three-year maximum duration of contracts and reduces severance benefits. The government said such provisions are intended to encourage formal hiring. 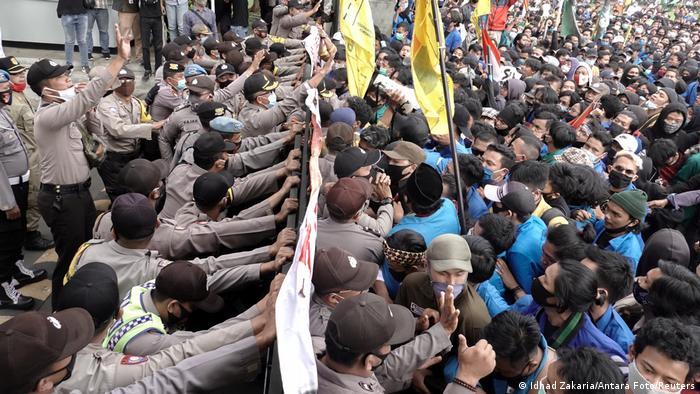 Ida Bagus Adhitya Pudja, a Jakarta-based lawyer specializing in labor and employment law, told DW that previously, the government could step in to prevent termination of employment for workers. But under the new law, the government should provide a social security program for laid-off workers in the form of hard cash or access to the labor market or vocational training.

For Pudja, the bill is part of Indonesia's wider efforts to transition from a largely informal economy to a formal one.

According to Pudja, the idea of workers remaining in the same job with the same employer for long periods of time "is an outdated notion," particularly "under the new paradigm of the modern labor market."

Threats to the environment

Environmental activists and indigenous rights groups warn that the new law would also lead to the demolition of rainforests that are vital to control carbon emissions. Under the law, companies are no longer required to involve the local population in assessing the environmental impact of their activities.

It empowers the central government to approve business and investment in officially designated forest and peatland areas, which are currently under a deforestation moratorium. It would also eliminate the current requirement that provinces maintain a minimum forest cover of 30% of provincial land and instead give local authorities the right to establish their own standards "proportionately."

Washington-based environmental group Mighty Earth said that the legislation would not only reverse recent successes in reducing forest loss but allow for "uncontrolled deforestation" and damage Indonesia's international reputation in the palm oil sector.

Virtual weddings take off in Indonesia amid coronavirus pandemic

While supporters of the measure say they expect it to attract foreign investment, opponents argue that relaxing restrictions on forest burning is a miscalculation and would have the opposite effect.

"Foreign investors and major trading partners are increasingly basing their investment and import decisions on standards of environmental sustainability that will protect Indonesia's priceless forest cover and biodiversity rather than destroy it,"Mighty Earth's campaigns director Phelim Kine said in a press release.

A group of 36 global investors representing more than $4 trillion (€3.4 trillion) in assets under management published an open letter hours before the vote, calling on the Indonesian government to take a sustainable approach to economic recovery from the pandemic instead.

"We fear that proposed changes to the environmental compliance monitoring, public consultation and sanctioning systems will have severe environmental, human rights and labor-related repercussions that introduce significant uncertainty and could impact the attractiveness of Indonesian markets," the letter said.

Madani, a local non-governmental organization, has warned that the law weakens legal protections for the environment and could result in the complete destruction of natural forest cover in the provinces of Riau, Jambi, South Sumatra, Bangka Belitung and Central Java over the next two to three decades.

"The Indonesian parliament made a ruinous false choice between environmental sustainability and economic growth by effectively legitimizing uncontrolled deforestation as an engine for a so-called pro-investment job creation policy," said Kine.

Rizki Akbar Putra and Prita Kusumaputri contributed to this article.

To meet its demands in the construction sector, Balkan state Bosnia and Herzegovina has started recruiting migrant workers from Bangladesh. Many are going with the hope of earning enough to send money back to their families. This video was originally published by infomigrants.net.