Indonesia has stopped working with its neighbor Australia on joint military activities, including sea patrols to combat people smugglers. It follows allegations Australia tried to tap the phone of Indonesia’s president. 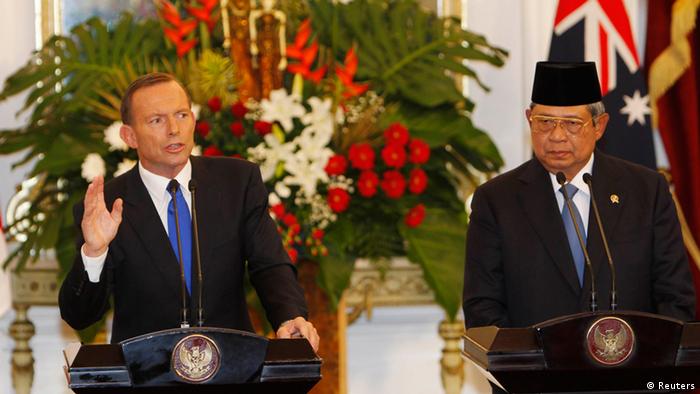 In a televised address on Wednesday, Indonesian President Susilo Bambang Yudhoyono demanded an official explanation from Australia about the spying allegations and announced a halt to its intelligence and military cooperation in the meantime.

"I have ordered the suspension of intelligence exchange cooperation, joint military training and coordinated military operations in the sea until everything is clarified," Yudhoyono said. “It is clear that this is a logical step Indonesia must take."

Reports in the Australian media, based on documents leaked by United States whistleblowerand former NSA contractor, Edward Snowden, allege that Australian spy agencies had tried to tap the phone of President Yudhoyono, his wife and other members of his inner circle in 2009.

However, Yudhonyo (pictured right) said he wanted to continue the country's "good relationship" with Australia once the phone tapping allegations were explained and resolved.

The freezing of cooperation from Indonesia on anti people-smuggling measures, including patrols at sea, is a sensitive issue for Australia.

A new website exposes the conditions inside Australia's controversial immigration detention centers. More than 5,000 people are currently biding their time in the country's IDCs. (20.06.2013)

Hundreds of people, mainly asylum seekers from the Middle East and Central Asia, set off from Indonesia each year in an attempt to reach Australian shores by boat.

Australian Prime Minister Tony Abbott (pictured left) won elections in September by promising to take a hard line on the asylum seekers, including turning boats back to Indonesia when it was safe to do so.

Regret, but not remorse

Yudhoyono has accused Abbot of not taking the spying allegations seriously and in parliament on Wednesday, Abbott again stopped short of an apology, though he vowed to do everything he "reasonably can" to repair the damage caused.

"I deeply and sincerely regret the embarrassment that media reports have caused President Yudhoyono, who is a very good friend of Australia," he said. "I do understand how personally hurtful these allegations have been, these reports have been, for him and his family."

The chief of Indonesia's intelligence agency, Norman Marciano, said on Wednesday he had been assured by Australian officials that the spying had stopped and would not start again.

An engineer who worked for the US Navy has admitted he tried to sell secrets about nuclear submarines to a foreign power. It's unclear which country it was, although court documents suggest it was a US ally.