Indonesia: Epidemiologists warn of high COVID risk at disaster shelters | Asia | An in-depth look at news from across the continent | DW | 14.12.2021

Indonesia is prone to frequent natural disasters and people are often evacuated to crowded shelters without pandemic protocols. 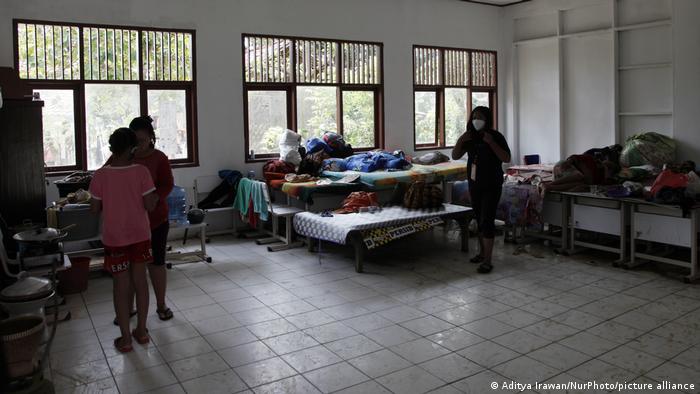 As a sprawling archipelago on the ring of fire, Indonesia frequently experiences strong earthquakes, tsunamis and volcanic eruptions.

A 7.3-magnitude earthquake in the Flores Sea on Tuesday sent people running from the coast in panic, although a tsunami warning was called off and damage was reported to be minor.

However, disasters in Indonesia can often be more serious. The sudden eruption of Mount Semeru in East Java earlier in December killed at least 46 people and sent hundreds to seek refuge in temporary shelters.

During the coronavirus pandemic, there is an increased risk of the virus spreading when people are forced to leave their homes and live cramped in makeshift evacuation centers built in schools, mosques and village halls.

Emi Abriyani, the head of a disaster management agency in Kalimantan said that although accommodation has been built to separate families, many of the disaster shelters are at capacity.

A local woman who spoke to DW said her family had been forced to leave their home, but that they were lucky enough to be able to stay with relatives. Neighbors who fled to crowded evacuation centers told her that few pandemic protocols were being followed.

Epidemiologists have also warned about the risk of COVID-19 transmission at crowded temporary shelters.

Ideally, during the pandemic, people in temporary shelters would follow strict health protocols such as maintaining distance, wearing masks and regularly washing hands.

However, disaster often happens so fast that people are not even thinking about health protocols. In these cases, having measures already in place at shelters would help. Even better would be if more people in Indonesia were to receive a vaccine.

However, Dicky Budiman, an epidemiologist from Griffith University in Australia, expressed his concern as most people in Indonesia have yet to receive a full dose of any COVID-19 vaccine.

According to the Ministry of Health, only half of Indonesians are fully vaccinated, and around 70% have received a single dose. Although case numbers are lower following a surge in late summer, the omicron variant has recently raised concern.

"At least 80% of residents in disaster areas need to get vaccinated. Not only the elderly, but also young people," he said.

Budiman added that authorities should make extra effort to outfit shelters to stop the virus from spreading during disasters. This includes adding extra fans and posting advisories regarding sharing items like clothes and utensils.

It does not take too much time to prepare coronavirus-safe shelters, he said. "A proper evacuation site can be prepared in less than 24 hours. Yet, the biggest challenge in this pandemic is human resources, funds, and tools," he added.

Meanwhile, an epidemiologist from the Association of Indonesian Epidemiologists, Masdalina Pane, said she regretted the lax implementation of health protocols in evacuation shelters during the pandemic.

COVID-19: Indonesians keen to get vaccinated

"In the refugee camps, the risk of transmission is higher, and the risk of the virus spreading is also very fast," she told DW.

Pane urged the government to provide more screenings and testing to screen people before they enter a shelter. She added that the ideal space would be three family members in a 12-square-meter (129-square-foot) room, with at least 1 meter of distance between beds. "The most important thing is good air circulation," she added.

"Keep wearing masks and get vaccinated immediately, that's the only key," she added.

Suharyanto, the major general who heads the disaster management agency, said last month that the government is aware of the need to maintain hygiene regulations at disaster shelters.

"Sometimes when disaster strikes, we forget to continue practicing our discipline on health protocols," he said. "If you can't maintain a minimum distance, please don't take your masks off."