National Disaster Management Agency spokesman Agus Wibowo said some of those who died were electrocuted.

Over 62,000 people were evacuated in Jakarta alone, the Reuters news agency quoted Wibowo as saying.

"The floods hit without warning," said one survivor from western outskirts of Jakarta, Munarsih.

"The water came very fast and it rose quickly. We couldn't manage to get our stuff out, including my car," she told AFP news agency..

Images from the affected neighborhoods showed waterlogged homes and cars, with people using rubber lifeboats or inner tubes to navigate the floodwater.

East Jakarta resident Umar Dani said he and his family were evacuated overnight after water levels reached his neck.

"It has not flooded for so long here. We didn't have the chance to bring anything," the 52-year-old told Reuters. "I have to live on the streets now." 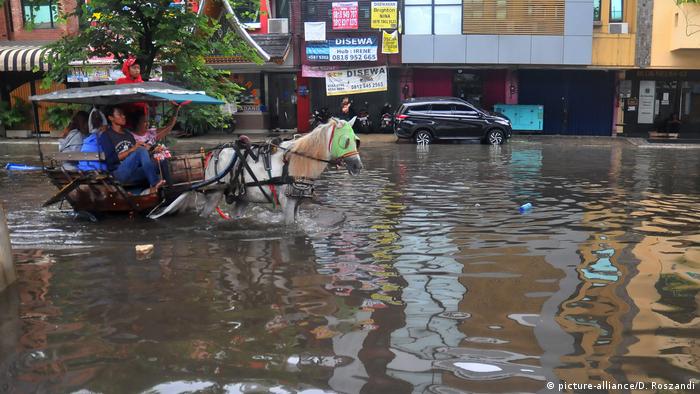 A horse takes on the floods in Jakarta on January 1

Landslides on the edge of Jakarta

The flooding began on Wednesday after water inundated the Indonesian city after 18 hours of heavy rain. Homes were submerged and vehicles washed away. Water levels reached up to 2.5 meters (8 feet) in parts of the Indonesian capital.

The rain and abrupt flooding also triggered deadly landslides on the city's outskirts.

A domestic airport also shut and tens of thousands of people were displaced, Wibowo added.

Around 120,000 rescuers were helping people evacuate on Thursday, according to Wibowo. As much as 37 centimeters (14.5 inches) of rain fell on Wednesday alone.

Jakarta governor Anies Baswedan tweeted that the government would help all those affected by the floods.

Baswedan also told reporters on Wednesday that his administration would push ahead with infrastructure projects on two major rivers, including a dam and a sluice, to prevent flooding in the city of 30 million people.

Indonesia frequently experiences earthquakes and flooding. The current flooding is the worst since 2013 when dozens of people were killed in monsoon rains.

Torrential rains and rising rivers have hit Indonesia's capital region hard in recent days, submerging thousands of homes, causing landslides in some districts and displacing tens of thousands of people. (02.01.2020)