Protesters in Colombia have demanded that the president meet with Indigenous groups to discuss rising violence in parts of the country. Trade unions and student groups have also called for a national strike. 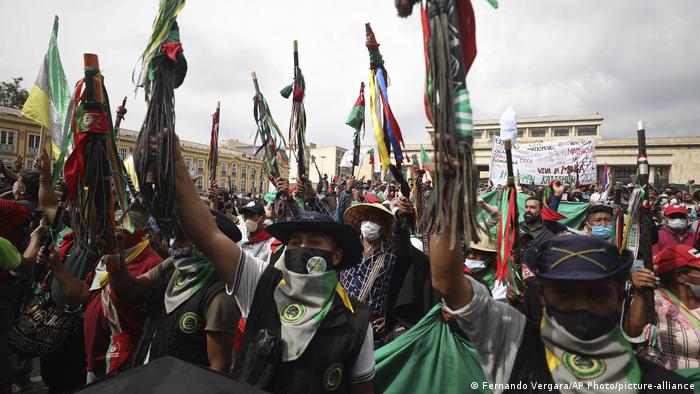 Thousands of Indigenous protesters gathered in Bogota on Monday in front of the presidential palace to demand a public meeting with the Colombian president, Ivan Duque.

The protesters, numbering at least 7,000, including many Indigenous people, arrived in the capital with many having travelled for more than a week from their home regions, mostly in the south west of the country.

The column of colorful buses and pickup trucks called itself the "minga" — an Indigenous term referring to joint community work or action.

Eruption of violence after peace deal

Protesters wanted to have a discussion with the president over growing violence in certain parts of the country, which erupted after the 2016 peace deal with the Revolutionary Armed Forces of Colombia (FARC) rebel group.

The protesters said that a lackluster implementation of parts of the deal have allowed space for rival violent groups to stake claims on the drug routes and areas previously under FARC control. Protest leaders claimed that at least 167 of their people have been killed in the two years that Duque has been in office. 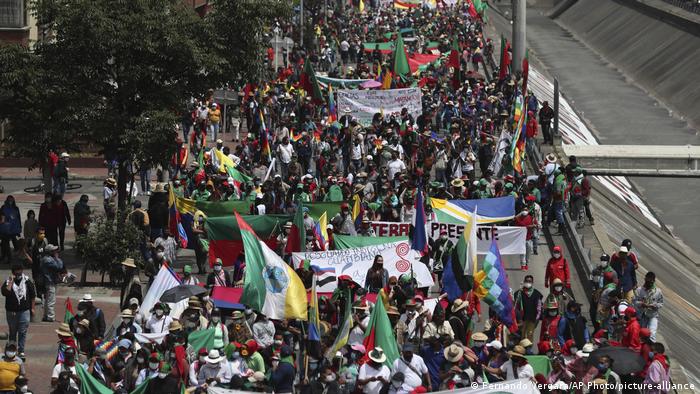 Thousands of protesters marching through the streets of Bogota, Colombia

The watchdog Indepaz claimed that around 1,000 civil society leaders and activists have been killed since the signing of the peace deal with FARC. They also reported over 65 massacres — defined as the killing of at least three people —in 2020 alone.

The 2016 peace deal stipulated improved infrastructure and aid in rural communities, including Indigenous ones, but protesters claims these have not been fulfilled. They had hoped to stage a public debate with President Duque over his government's economic and social policies.

"We will be here until he shows up, because we want dialogue. We have not come here to fight," said Richard Flores, an Indigenous leader from the Cauca state. 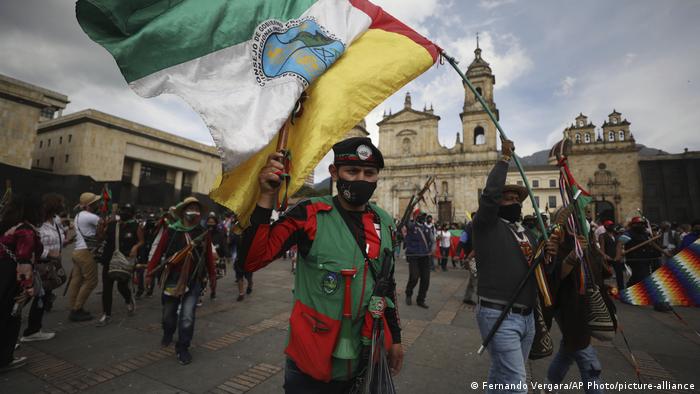 Duque refused to meet with protesters, saying that policy should be discussed through the correct channels, namely in parliament. He did, however, suggest meeting with a small group of leaders from the various groups taking part in the protests.

Trade unions and student groups also called for a "national strike" on Wednesday as a rejection of Duque's administration, almost one year after mass anti-government protests rocked the country. The travelling protesters were able to spend Monday night in a sports center, made available by the mayor of Bogota, Claudia Lopez, who opposes the government.