Indian-Pakistani film collaboration continues despite critics | Asia| An in-depth look at news from across the continent | DW | 24.05.2016

Indian and Pakistani filmmakers are teaming up on movie projects despite threats from national extremists in both countries. Can the cooperation reduce tensions between the historic rivals? 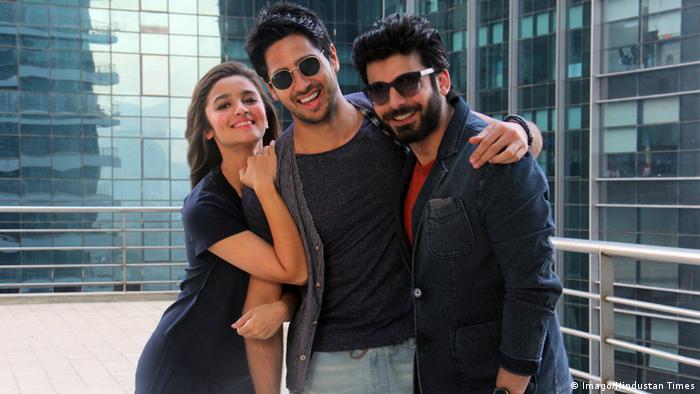 A number of Pakistani actors are crossing over to India to work in the world's biggest film industry, Bollywood. Mahira Khan, a famous Pakistani actress, is set to appear in an Indian movie with Shahrukh Khan, one of India's most successful actors. But their upcoming film "Raees" aims not only to increase Khan's popularity across the border, but also to reduce long-standing tensions between the two South Asian nations.

The project has irked Hindu nationalist groups, who are already critical of Shahrukh Khan for his "soft spot" for Pakistani artists and athletes. Shiv Sena, an extremist Hindu organization, has vowed to prevent "Raees" from screening in Mumbai and other Indian cities.

"We have taken a stand not to allow any Pakistani actor, cricketer or performer to step on Indian soil," Akshay Bardapurkar, a Shiv Sena member, said in a statement last year.

Apparently, Shiva Sena means what it says. Fawad Khan (shown right in the above picture), who now regularly appears in Indian movies, was attacked by Shiv Sena activists last year. The group has targeted a number of Pakistani performers in the past few years, forcing many Pakistani singers to cancel their shows in the country. 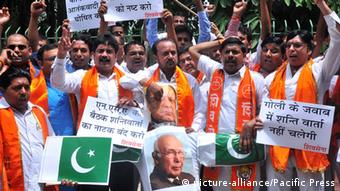 Right-wing groups in Pakistan have a similar problem with Indian artists. Earlier this year, Indian film director Kabir Khan, who was invited to a literature festival, was harassed at the Karachi airport by extremists.

Beneficial for both countries

But Indian and Pakistani actors and filmmakers seem largely undeterred by the threats.

Ali Zafar, who was one of the first Pakistani actors to play a lead role in a Bollywood film, told the "Hindustan Times" newspaper that Indian-Pakistani film dynamics are changing rapidly.

"In 2008, when I came to India to shoot "Tere Bin Laden" (a satirical movie about former al Qaeda chief, Osama bin Laden), there was no real collaboration happening between the two countries. Now, things have changed. In the future, this partnership will increase," Zafar said.

Whatever happened to Pakistan's film industry?

Pakistan is currently witnessing a rennaissance of its once nearly defunct film industry. Nadeem F. Paracha takes a closer look at how the times have changed. (29.08.2015)

Nabeel Qureshi, a Pakistani film director, believes artists are free people who cannot be confined to a single country. "Pakistani cinema should collaborate with Iran, India and even Hollywood," Qureshi told DW.

Zahid Ahmad, a Pakistani TV artist, believes Indian and Pakistan can both benefit from join ventures.

"More Indian actors should come and work in Pakistan. The quality of Pakistani TV programs is excellent. The Indian directors admire the quality of our work, and our TV dramas are very popular across the border. So they can also benefit from working in our country," Ahmad told DW.

The dominance of Indian cinema

But there is resistance against joint Indian-Pakistani movie ventures as well as Bollywood film screenings in Pakistan. Some Pakistani filmmakers believe the size of the Indian film instustry is so big that it could smother their own.

"I am not against Pakistani artists working in Indian movies; I am against Indian movies being shown in Pakistan, as they are damaging our culture and norms," prominent Pakistani director Syed Noor told DW.

Noor says private news channels are distributing and promoting Indian movies illegally, which is inflicting a financial loss on the local film industry.

Filmmaker Nabeel Qureshi believes the Indian government should reciprocate the gesture and allow Pakistani films to screen in theaters. "Movies produced in Pakistan can only make money if they will be allowed to be shown in Indian cinemas," he said. 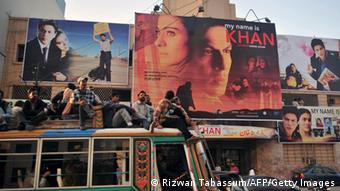 Can Pakistani films compete with popular Bollywood movies in the local market?

"People in India are in love with Pakistani actors and singers. Last year, Pakistani singer Atif Aslam's song topped the film music charts. Despite tensions, the Indians appreciate Pakistani talent and there is a big demand for their work across the border," Shekar told DW.

Shekar believes cultural and historic ties between the two countries are too strong to be silenced by critics.