Indian milk farmers say they miss out on record dairy industry profits | Asia | An in-depth look at news from across the continent | DW | 09.11.2020

India's biggest dairy co-operative has managed to turn a profit during the coronavirus pandemic by bolstering its supply chain. However, farmers producing the milk say their wages barely cover operating costs. 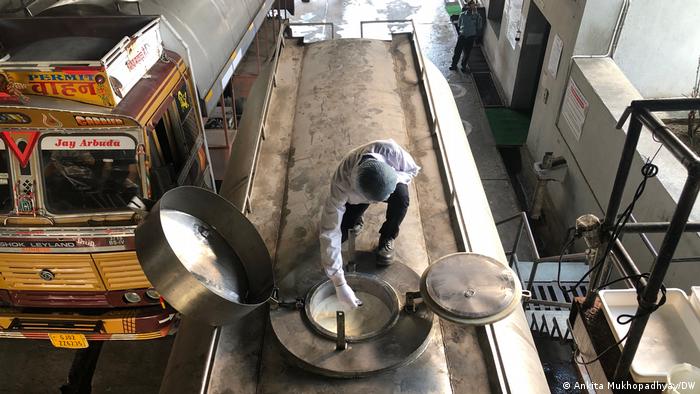 The logo of Kaira District Milk Producers Union (Amul) is hard to miss in the city of Anand in India's western province of Gujarat. Amul's headquarters there houses a massive plant that churns out millions of liters of milk every day.

After India went into a nationwide coronavirus lockdown in March, there were initial concerns over the supply of milk from the country's biggest milk producer. But Amul continued production at the same pace during and after the lockdown, and was able to grow its revenue by an expected 16%.

Anil Bayati, manager at AmulFed dairy, an Amul plant in the city of Gandhinagar, said Amul's preparedness played an important role in its success during the global pandemic.

"We started preparing for a difficult scenario on March 11, once we found out that the coronavirus had arrived in India," Bayati told DW.

"We first informed our farmers about the precautions that they had to take in delivering milk, as it's a perishable item, and its supply can't be hindered. We made special efforts to develop sanitation and hand washing systems to ensure the safe procurement of milk in villages," he added. 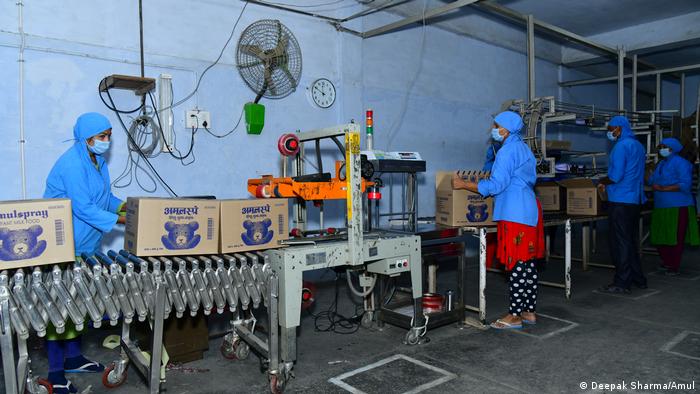 Workers in protective gear at the Amul plant

Pramod Kumar Singh, a professor at the Institute of Rural Management (IRMA) in Anand, Gujarat, said Amul was able to take advantage of demand for milk during the lockdown.

At the beginning of the lockdown, demand for Amul products, such as long shelf life milk, skyrocketed as consumers began panic buying.

According to Sandip Patel, a public relations officer at Amul, truck drivers and plant workers who came to work from various parts of Gujarat and India were retained to keep milk deliveries flowing.

To prevent layoffs at locations with lower demand, Amul relocated workers to units that needed help.

Amul provided workers with protective equipment, transport to and from work, and other support. It also set up 12-hour rotating shifts so that Amul could meet government coronavirus regulations of allowing just 50% workers on site.

To prevent the spread of infection, Amul introduced measures to reduce interaction between employees, both inside and outside the factory. Loading time in farming villages was increased to allow for social distancing. 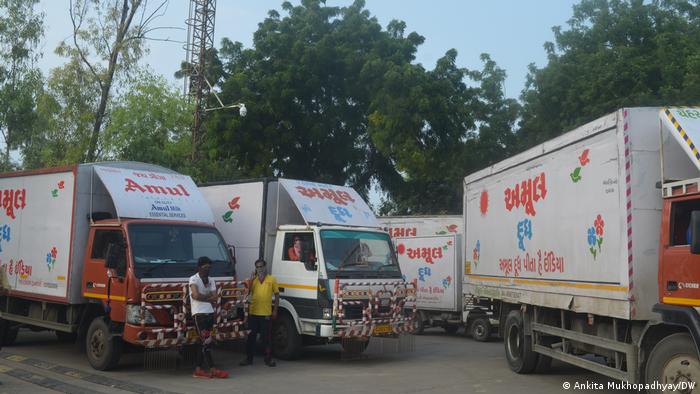 Milk truckers were given meals by Amul during India's lockdown

Farmers get the leftovers?

However, in the countryside far from the glossy factories of Amul, people in the farming villages often have a different mindset on the dairy industry during the pandemic.

In the village of Koba near Gandhinagar, dairy farmers who regularly send milk to district milk unions continue to work without face masks. Many believe the coronavirus is a hoax to scare the public.

The farmers also feel that Amul's success story during the lockdown has not trickled down to them. In interviews with DW, farmers voiced concerns over low wages, with some of them reporting earnings of just $2.00 (€1.70) per day or less. 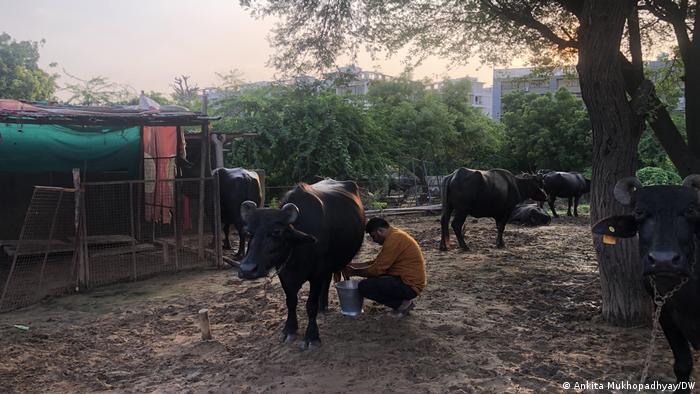 Many Indian dairy farmers work work with a small heard

Ishwar Patel, a dairy farmer, told DW that the typical farmer spends more than that every day, just to maintain a farm.

"The cow or buffalo has to be fed well for it to produce milk rich in fat and proteins. However, as dairies have kept the prices of milk constant, the farmer ends up earning less," Patel said.

Too much milk powder

Bipin Desai, a former employee at an Amul plant, thinks one of the reasons farmers have to bear the brunt of low prices is the lack of market demand for Amul products like milk powder, which is currently in oversupply.

"Amul recorded little demand for its milk powder, and other products like ice cream, during the initial months of the lockdown," Desai said.

"There is about 100,000 tons of milk powder in Amul's inventory. Amul has to sell this off, and it is unable to do so as exports have stopped and there is the challenge of foreign players entering the milk powder sector," Desai told DW, adding the loss is passed on to farmers' compensation.

AMUL has asked the Indian government for a $20 million export incentive to help it offload the massive supply of powdered milk.

Desai said he would like to know why Amul doesn't provide a minimum support price (MSP) for milk, which sets a price guaranteeing farmers can survive, and is stipulated by the Indian government for crops like vegetables.

Dairy farmers who aren't under the Amul model have previously protested and asked for an MSP for milk prices in the past.

"Instead of paying incentives to employees at its plants, Amul could make sure farmers are compensated for their hard work. Otherwise most of them will leave the profession," said Desai.