Election officials shrugged off the biggest single-day rise in COVID cases in five months to allow voting to proceed in West Bengal and Assam. The polls will be a key test of PM Narendra Modi's handling of the pandemic. 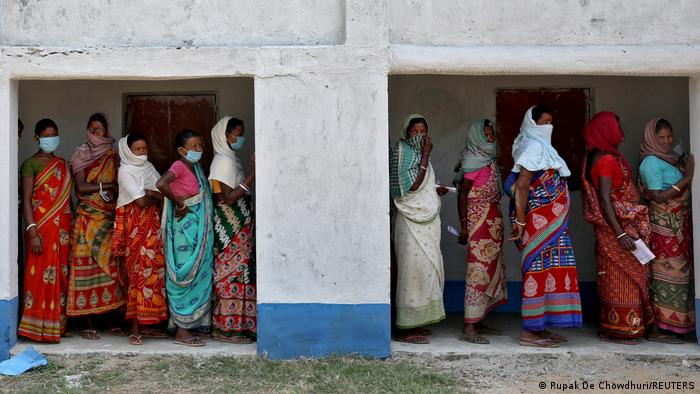 Voting in elections in two major Indian states began on Saturday, with over 180 million voters expected to cast their ballots.

The elections, in West Bengal and Assam, willoffer a test of Prime Minister Narendra Modi's support amid the coronavirus pandemic and the four-month-long farmers' protests.

Polls are also due to take place over the next few weeks in Kerala, Tamil Nadu and the federally administered territory of Puducherry.

The polls are set to take place through April 29, with results expected on May 2.

News channels showed voters wearing masks, as officials carried out temperature checks and tried to maintain physical distancing in queues, as the first phase of the elections began in West Bengal and Assam on Saturday morning.

"Urging those eligible to vote in record numbers. I particularly call upon my young friends to vote," Modi tweeted as the polls opened.

Elections kicked off even as India recorded over 62,000 new cases in its biggest single-day surge in more than five months, bringing the total number of cases to over 11.9 million.

New infections were 5.3% higher than on Friday, while 291 deaths were also recorded, bringing the death toll to 161,240.

Re-elected for a second five-year term in 2019, Modi's hold on power is, however, not directly under threat by the regional votes.

In West Bengal, Modi's Hindu nationalist Bharatiya Janata Party (BJP) is running up against Mamata Banerjee and her regional Trinamool Congress party, which has been in power for two terms now.

The BJP currently controls a dozen of India's 28 states, with alliance partners in several others. However, it has never won power in West Bengal.

Should the party defeat Banerjee, analysts say it would deal a blow to the country's broader opposition.

The country's fourth most populous state, with 90 million people, is key to controlling the upper house of the federal parliament, whose members are elected by state assemblies.

Sporadic incidents of violence between political activists were reported from Bengal, according to local media.

Officials have also expressed concerns over huge crowds at rallies, amid the country's emerging second wave of the pandemic.

After a decline in cases until early this year, India is witnessing a spike in new infections. Prime Minister Narendra Modi has called for measures to halt an "emerging second peak."