India has successfully launched its heaviest ever "indigenous" rocket, marking a major milestone for the country's low-cost space exploration program. The spacecraft could one day be used to carry astronauts to orbit. 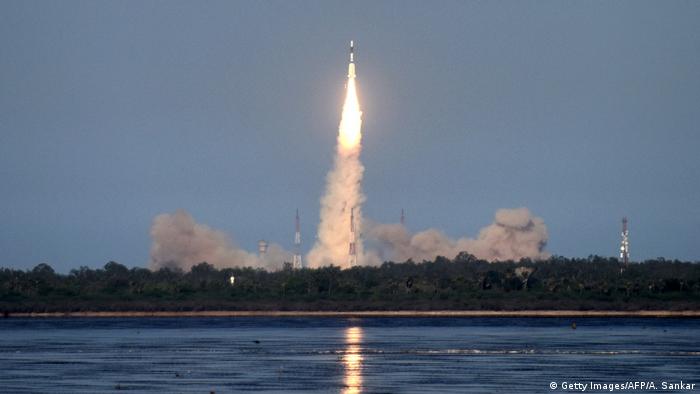 The 43-meter (140-foot) rocket blasted of from the Sriharikota launch pad southeast in India on Monday, placing a 3,136-kilo (6914-pound) communications satellite into orbit.

In the past, India's space agency ISRO would use French-made rockets to carry heavy loads. However, their 13-story-high, 640-ton GSLV Mk III vehicle marks a new stage for nation's spacefaring ambitions, as it was designed by Indian researchers for transporting large devices and, eventually, astronaut capsules into orbit.

The rocket boasts powerful cryogenic engines, which were also developed in India in a bid to reduce reliance on European propulsion technology.

A New Zealand-US start-up has made history by launching a first rocket from a private launch site. The company, Rocket Lab, made the experimental craft out of carbon fiber and powered it with 3D-printed engines. (25.05.2017)

SpaceX has carried out its first US military launch in Cape Canaveral. Although the payload was classified, it was for an agency that makes and operates spy satellites for the US. (01.05.2017)

India has successfully launched 104 satellites from a single rocket, setting a world record. Most of the orbiting hardware was made up of nano-satellites; the smallest weighing just over a kilogram. (15.02.2017)

"Communication satellites are quite heavy and we were able to send up to two tons previously," Ajay Lele from the Delhi-based Institute for Defense Studies and Analyses told the AFP news agency. "This is a double quantum jump for India."

With the latest launch, ISRO moves closer to making India the fourth nation in the world capable of sending humans into orbit, alongside to the US, Russia and China. However, scientists say it will take another several years to achieve this landmark.

In addition to scientific missions, ISRO offers low-cost launches for commercial clients, positioning itself in the growing market alongside companies such as Rocket Lab and SpaceX.

India is also working on developing a reusable space shuttle to carry astronauts to space and back.

In February, ISRO set a world record by sending up a total of 104 satellites in a single launch.

Budget space travel could be in the stars

Budget space travel could be in the stars

Barr: DOJ has found nothing that could impact election result 1h ago