Indian Prime Minister Narendra Modi is in the US West coast to campaign for the "Digital India" project. Together with Facebook's Mark Zuckerberg, he spoke about the power of social media and the upliftment of women. 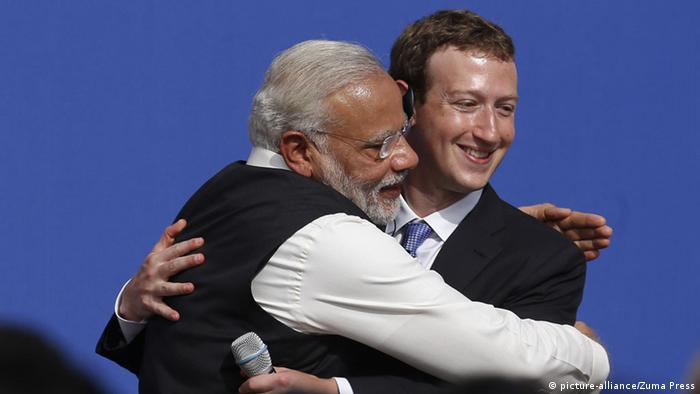 At a question and answer session that was streamed live on Facebook and moderated by Facebook CEO Mark Zuckerberg, Modi addressed world leaders, saying "you are not going to gain by running away from social media."

He said the medium helped tell governments "where they are going wrong and give them an opportunity to do a course correction." The Prime Minister's Office (PMO) tweeted a link to a video showing Modi's meeting with Zuckerberg.

The Indian Ministry of Information and Broadcasting tweeted a picture of the meeting at the Facebook headquarters:

Speaking at Facebook, Modi said he hoped to connect all Indian villages with fiber optic cables and said he aimed to include more women in India's decision-making.

"If we want to achieve our economic goals, we cannot do that if we imprison 50 percent of our population inside their houses," he said.

Facebook founder Mark Zuckerberg also spoke of how he found inspiration during a journey to India. "I went and traveled for almost a month," Zuckerberg said, adding, "Seeing the people and how people connected, reinforced what we were doing and is something I've always remembered."

The Facebook chief also pointed out his parents in the audience and asked Modi about his own mother, who is over 90 years old. "It is hard to imagine that a tea seller has actually become the leader of the world's biggest democracy," Modi told the audience.

The leader also participated at an "Indian Community Reception" at the SAP center in San Jose, California, which was attended by nearly 18,000 people.

He also visited Google's office in Mountain View, California, where the company's CEO Sundar Pichai announced a joint project with the government of India to provide wireless internet at 400 railway stations in the country by the end of next year.

Modi's tour of the Silicon Valley comes alongside Chinese President Xi Jinping's meeting with US technology executives in Seattle. The Indian Prime Minister will meet US President Barack Obama on Monday, ahead of the UN General Assembly meeting in New York.

Would you like to add a comment? You can do so below. The thread will remain open for 24 hours after publication.

As China's slowdown impacts ties with Africa, India is seeking to step in and boost political and economic ties with the continent. The upcoming India-Africa Summit may offer a key opportunity to do that. (11.09.2015)