India and Nepal have signed accords which grant millions in aid to help rebuild earthquake-ravaged Nepal. The agreements seek to not only repair infrastructure but also to fix relations between the two countries. 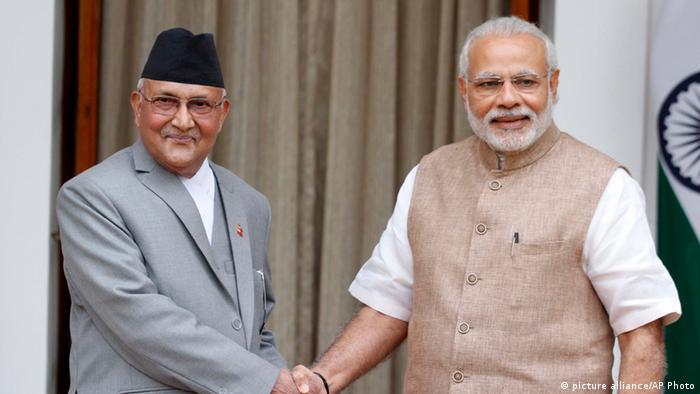 The countries' foreign ministers signed nine accords, including an agreement to distribute $250 million (224 million euros) of the $1 billion aid package pledged by India last year in earthquake relief to Nepal.

The assistance will cover housing, health, education and cultural heritage in the areas of Nepal hit hardest by a 2015 earthquake, which killed almost 9,000 people.

Oli and Modi also agreed on a transmission line for the supply of Indian electricity to Nepal under a credit line of $13.5 million.

"The main mission of my visit is to clear the misunderstanding that surfaced in the last few months and to take back our relations to the same level of enthusiasm we saw when Mr Modi visited Nepal in 2014," Oli said to reporters while standing next to Modi.

Tensions arose between the two countries following a border blockade and deadly protests over Nepal's new constitution. The protests were led by Nepal's Madhesi ethnic minority, who said the controversial new constitution redrew borders that cut through their ancestral homeland. Over 50 people have died in clashes with police over the past few months.

Kathmandu accused India of installing an "unofficial blockade" on Nepal to support the Madhesis, who share close cultural links with Indians across the border.

India has denied backing the protesters, who lifted a blockade on a key checkpoint earlier this month. The government in New Delhi has urged Nepal to speak with the Madhesis to resolve the dispute.

"The entire world acknowledges Nepal's commendable progress on the path of democracy and federalism in last few years," said Modi on Saturday, calling the constitution an "important achievement."

"I am confident you will take Nepal on the path of peace and stability by resolving all constitutional issues on the basis of these principles, through political dialogue and by taking along all sections of Nepal," the premier told reporters.