Authorities have said the murder of a Muslim man supposedly targeted for eating beef was premeditated. The revelation comes as concerns grow in India over the resurgence of Hindu nationalism. 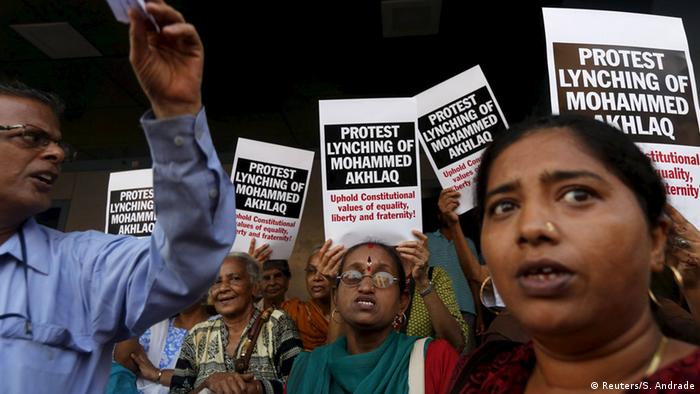 Government investigators on Wednesday said the killing of a Muslim man, named Mohammed Akhlaq, was not a spontaneous act but a premediated murder that was partly incited by the local temple.

Akhlaq was lynched last month by an angry mob in the village of Bisara after rumors circulated that he had eaten beef - a taboo in the Hindu - dominated country, where cows are considered sacred by many.

A subsequent investigation by the National Commission for Minorities has found evidence suggesting the murder had been planned prior to the accusations.

In their report, investigators said the mob responsible for the killing "gathered within minutes of the announcement from temple's loudspeaker and at a time when most villagers claimed they were asleep."

The three-member team concluded that "the whole episode was the result of a planning, in which a sacred place like a temple was used for exhorting people of one community to attack a hapless family."

The revelations emerge as controversy grows over the perceived intolerance in India under Prime Minister Narendra Modi, a noted Hindu nationalist.

Government authorities faced criticism after Akhlaq's murder for not doing enough to hold his killers accountable. The subsequent protests by ordinary people and human rights activists alike have raised awareness of what many see as a rise in Hindu extremism in the country, with attacks on Muslims and forced conversions to Hinduism becoming increasingly common.

Earlier in October, an Australian was threatened by a group of men at a restaurant in the Indian city of Bangalore because of his tattoo of a Hindu goddess.

Hardliners in Modi's government have called for tighter restrictions on cow slaughter, and some states have imposed bans on eating beef.