India has once again proven its desire to become a key player in the global space industry. The country's state-run space agency pulled off a massive 20-satellite launch in a single attempt. 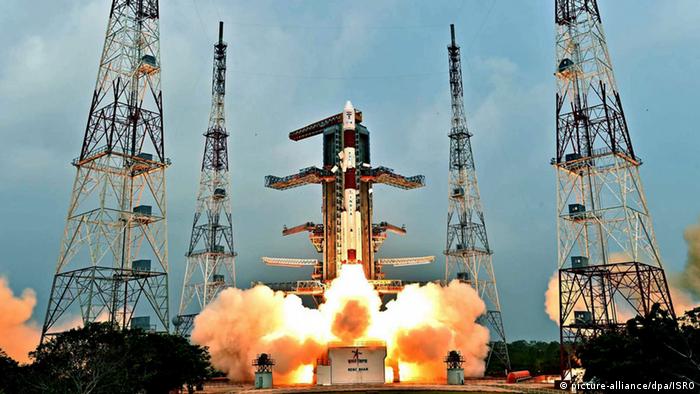 India scored a record on Wednesday as it successfully launched 20 satellites into the atmosphere in one mission. Prime Minister Narendra Modi hailed the "monumental achievement" of the Indian Space Research Organization (ISRO).

"Twenty satellites in a go! ISRO continues to break new barriers," Modi said as he congratulated the scientists.

"Our space program has time and again shown the transformative potential of science and technology in people's lives," the prime minister added.

Modi has pushed ISRO's progress since taking office in 2014 as the country seeks its share of the $300 billion (265 billion euro) international space industry. Two years ago, despite negative expectations, India managed to mount a low-cost mission to set a probe into orbit around Mars on the first attempt.

A PSLV-C34 rocket took the twenty satellites into space, most of them for international customers, the vast majority of whom come from the United States. Its main cargo, however, was India's Cartosat-2 earth observation craft, which is capable of taking pictures at sub-meter resolution.

India's space agency has tested a scale model of a space shuttle in a bid to create its own brand of reusable rockets. The shuttle was developed on a limited budget and could drastically lower the cost of space travel. (23.05.2016)

The Indian Air Force (IAF) has said it will have its first female fighter pilots within the next two years. The move could open the door to women across the military sector. (24.10.2015)