At least 9 people have been killed and up to 150 are missing after a Himalayan glacier crashed into a dam and triggered a huge flood in in the northern state of Uttarakhand. 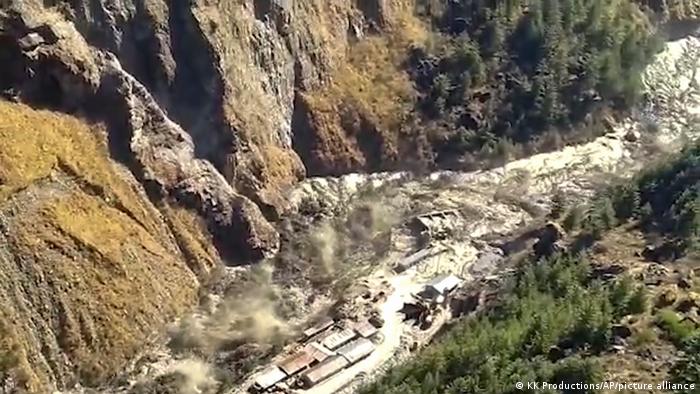 At least nine people were killed and another 150 were missing after a Himalayan glacier smashed a dam in Uttarakhand, causing major floods on Sunday.

Authorities also said that more than 16 people were trapped inside a tunnel.

Several rescue teams were sent in after the sudden barrage of water damaged two dams and several homes.

Prime Minister Narendra Modi's office said the government would grant financial compensation to those affected in Uttarakhand, including rupees 50,000 (€570, $687) to those seriously injured.

Local residents told Reuters news agency they feared workers from a nearby hydropower project had been swept away by the flood as well as other villagers who had been near the river at the time.

"We have no idea how many people are missing," villager Sanjay Singh Rana said.

The videos shared on social media showed how the dam was unable to hold back the sheer weight of water.

DW's Nimisha Jaiswal in New Delhi said a huge operation was now underway in the region to try to find those missing.

"We're hearing of multiple teams of rescue management forces being deployed; the army, the national disaster reserve force, as well as border police," she said.

"Thousands [of residents] have already been evacuated but experts say it'll only be clear how extensive the damage is once the floodwaters recede."

Prime Minister Modi said on Twitter that he was "constantly monitoring the unfortunate situation in Uttarakhand."

"India stands with Uttarakhand and the nation prays for everyone’s safety there. Have been continuously speaking to senior authorities and getting updates on NDRF deployment, rescue work and relief operations," he added.

The Indian Express newspaper said that part of the Nanda Devi glacier broke off on Sunday morning, two days after an avalanche on the same glacier.

Officials said that when the glacier broke off it released water, mud and other debris that had been trapped behind it. These in turn crashed into other bodies of water causing a knock-on effect further down the river.

The Uttarakhand state in the mountainous Himalayas region is prone to heavy flooding.

The region also has a chain of power projects on the Alaknanda River and its tributaries.