Four people have been shot dead by paramilitary troops in the Indian state of West Bengal in what has been described as an act of "self-defense." One other person died after clashes between supporters of rival parties. 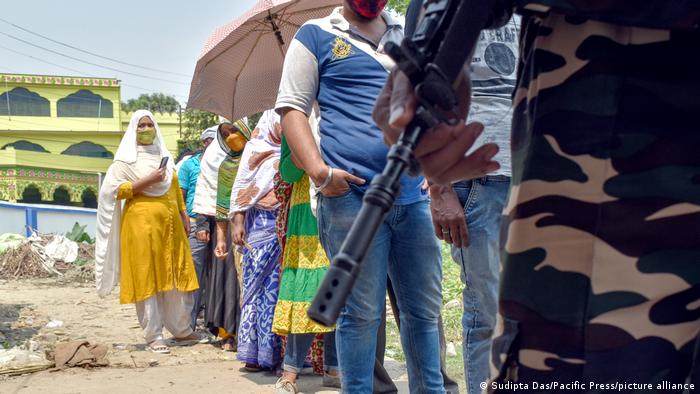 The election in West Bengal has been overshadowed by several deaths

Five people were killed on Saturday in fresh election bloodshed in the Indian state of West Bengal, including four shot dead by paramilitary troops, officials said.

West Bengal, which lies in eastern India, has seen thousands of people killed during decades of political unrest. The current state election campaign continues this violence.

The latest example of this occurred in the northern district of Coochbehar, some 700 kilometers (450 miles) north of Kolkata. The incident came as hundreds of people surrounded troops guarding a polling station.

The monthlong vote has gone ahead despite the country being ravaged by the coronavirus.

Troops acted out of 'self-defense'

"Paramilitary troops opened fire in self-defense after being challenged by over 400 people," a senior Election Commission official said, as reported by AFP.

"They also formed a ring around the troops and tried to snatch rifles," the official was quoted as saying. "Four people were killed in the shooting," the official added.

While giving a speech at an election rally in Siliguri, Prime Minister Narendra Modi said political opponent Mamata Banerjee "and her goons provoked the paramilitary forces to open fire." 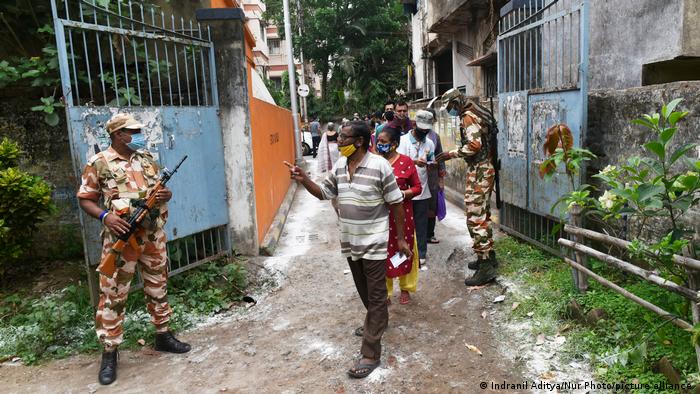 A guard stands by as locals head to vote in Kolkata, West Bengal

One dead after clashes between rival supporters

"The victim was a BJP supporter," local party chief Dilip Ghosh told news agency AFP. "Three people who were injured in the clash were admitted to a local health facility."

Winning power in the state of almost 100 million people would be a major victory for Modi, though the outcome will not be known until May 2.

Banerjee, one of Modi's most prominent critics, has accused the prime minister and his party of divisive sectarian policies. This has been particularly felt in West Bengal, which has a large Muslim minority.

India: Going beyond the headlines

DW aims at enhancing its presence in India with a new bureau in New Delhi. Bureau Chief Amrita Cheema talks about the new regional hub and what it means to be back in India.

India's economic powerhouse state, Maharashtra, is at the center of the country's worst coronavirus surge to date. But stopping the outbreak will put the brakes on the fragile recovery of the service sector.

India: Nepali man freed from jail after 41 years without trial

A Nepali man was arrested on murder charges in India in 1980 and sat in jail for decades without a trial. Rights activists say Durga Prasad Timsina's ordeal highlights the grim reality of pretrial detainees in India.