The World Press Photo Award, "the most prestigious and coveted award in photojournalism," recognized Ronaldo Schemidt's work, which features a powerful story symbolizing the current state of Venezuela.

Venezuelan photographer Ronaldo Schemidt has won on Thursday the esteemed World Photo Press Award for his powerful image of a protester consumed by fire amid violent clashes with riot police during a protest in Caracas, Venezuela in 2017.

Clashes between protesters and the Venezuelan national guard broke out on May 3, 2017, and Salazar was set alight when the gas tank of a motorbike exploded. He survived the incident.

Australian photographer Patrick Brown won in the General News — Singles category for "Rohingya Crisis," his haunting image of the bodies of Rohingya refugees laid out on the ground after the boat in which they were attempting to flee Myanmar capsized off the coast of Bangladesh. Of the roughly 100 people on the boat before it capsized, only 17 survived.

Read more:The world in pictures: How photography revolutionized the press 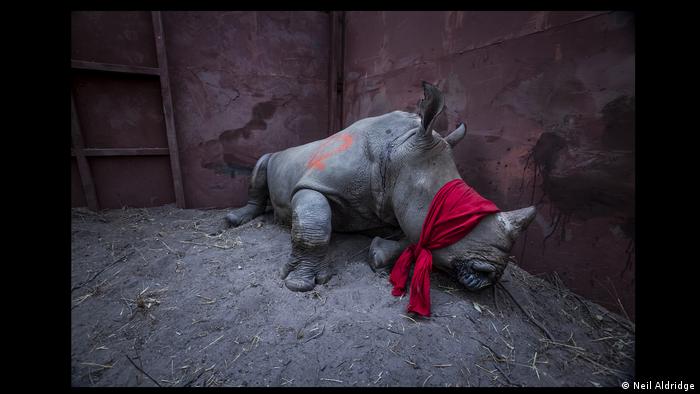 "Waiting for Freedom," by Neil Aldridge from South Africa, won the new Environment category for his image of a blindfolded white rhino that will be released into the wild in Botswana

The World Press Photo of the Year, the world's most coveted photojournalism award, honors photographers who have created timeless images that capture an event or issue of fundamental journalistic importance in the last year.

In 2018, the World Press Photo jury chose six nominees for the main prize, shortlisting as well photos in eight different categories — including a new environment category. Altogether, 42 photographers from 22 countries were selected and of these, 15 have won previous World Press Photo awards, while 27 are being recognized for the first time.

As with every World Press Photo contest, the jury debates the journalistic aspects of the stories as well as the aesthetic and technical dimensions of the image. Jerome Huffer, head chef of the photography department of the French magazine Paris Match and a member of the jury in 2018, hoped the press photo of the year would combine "the fundamentals of photojournalism with a new way of storytelling." He was not disappointed.

Click through the picture gallery above to view some of the World Press Photo Award winners this year, while the one below features shots from the 2017 awards.

Associated Press photographer Burhan Ozbilici has garnered this year's World Press Photo of the Year, one of the most prestigious accolades for photo journalism. (13.02.2017)

The most coveted photojournalism award in the world is marked by powerful images that combine deep emotional impact and supreme technical skill. Forty-two photographers from 22 countries were nominated this year. (12.04.2018)