In the heat of the city: Obama at the Brandenburg Gate

Snipers on the roof, a glass wall in front of the lectern - President Obama spoke at the Brandenburg Gate under heavy security. It was over 40 degrees Celsius: guests and journalists sweltered. 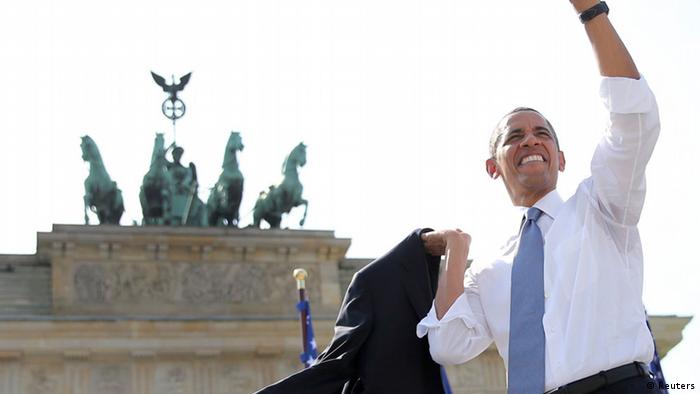 When faced with snipers, there's no joking around. For that reason, the windows in the DW offices on the top floor of a building in the government district remain closed on Wednesday (19.20.2013), despite the sultry heat that wafts through the hallway and collects under the desks.

"Whatever you do, don't open the windows," warns an experienced colleague, as two small figures move about on the roof of the government building opposite. They might be window cleaners, but they're more likely to be snipers - sure to be targeting us, according to the colleague. It's not quite clear whether he's serious. The windows remain closed for safety reasons.

With US President Barack Obama in Berlin for 25 hours, security is at maximum. Police cars are everywhere, the metro is closed and the area around the Brandenburg Gate is largely blocked off. "How do I get away from here?" asks a somewhat desperate-looking tourist. She doesn't care for Obama - the many police officers are making her visibly anxious.

Police officers are also standing outside the government press office, while inside journalists check out the buffet: Americans, Swedes, Germans, all crowded together. A photographer shows a picture of himself standing in front of the presidential plane Air Force One, which was taken the day before by his colleague. "It's pretty of cool," he says, grinning. "When I have kids, I'll show them the picture." 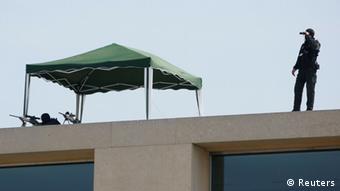 Snipers took up positions all around the Pariser Platz

Then he asks: "Have you heard of the scandal?" An American security guard apparently roughly pushed German President Joachim Gauck to the side when he tried to reach out to Obama. The photographer apparently saw it out of the corner of his eye, but unfortunately he wasn't quick enough to photograph it. He shrugs.

The photographer sits with other colleagues on the ground, waiting, their tripods and camera bags piled up in front of the security checkpoint. Anyone who wants to see Obama speak at the Brandenburg Gate has to go through here. Even photographers are now considered as potential terror suspects.

"Have you seen the American security officer with the thick legs? I've got a date with her afterwards!" The jokes become coarser the longer Obama takes to show up. Finally, the security check begins. A photographer complains that his phone is being examined for traces of explosives for the third time already. The guard shrugs his shoulders apologetically. "Sorry, we have to do it," he says - instructions from above.

Journalists will be shipped over to the site of the speech in several buses. The driver distributes water, as we wait until everyone has passed through security. A newspaper editor shakes his head: "This is insane. I've never seen so much security," he says. He's been an editor for nearly 20 years, and says even at the White House, where he accompanied former Chancellor Gerhard Schröder, security precautions weren't so high. For him, all this drama surrounding the president's visit is just too much.

"What are you writing? How many people are here?," asks a newspaper editor. The debate rages on the bus - how many of the 6,000 invited guests, including flag-waving students from the John F. Kennedy School and sweaty politicians, will actually show up? "Oh, just write that there were more police officers than guests," says someone else, to nods and grins. At least 8,000 police officers are said to deployed. 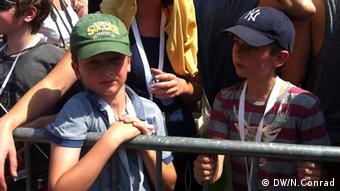 Jack (left) isn't sure why he's a fan of the president

The bus travels maybe 300 meters, and turns a corner. The journalists are allowed to get out and face the oppressive heat. Outside the gate, invited guests are waiting patiently. Among them is Jack, who has been waiting for more than two hours. "Because I'm a fan of Obama," says the seven-year-old American shyly. When asked why, he shakes his head and tries to hide.

His mother smiles. "Because in spite of everything, he's a good president," she says - despite the oft criticized drone operations and the recent PRISM spying scandal. She hopes that Obama will mention the good relations between Europe and the United States in his speech. A British journalist, his shirt stuck to his back, brings water to the barrier that separates the journalists from the guests. "The poor child, no water in this heat - impossible," he grumbles, before disappearing into the stands.

As music plays, German Economics Minister Philipp Rösler poses with a few colleagues in the front row for a photo. A few people have made newspaper hats, others have tied scarves around their heads. Then, at long last: the snipers on the roofs take their position, along with the sign language interpreter on the stage. Obama, Chancellor Angela Merkel and Berlin Mayor Klaus Wowereit walk through the Brandenburg Gate and sit on the stage. Before them is a sheet of bulletproof glass, behind is the well-known landmark. Someone in the crowd shouts "Obama, I love you," which is greeted by laughter, then silence.

Merkel speaks in front of the Gate, that symbol of freedom, thanking Obama for coming. He stands up, only to sit back down when Merkel tells him that she's not quite finished. The chancellor speaks highly of their trans-Atlantic friendship, and only then can Obama proceed. "Hello Berlin!," he says, as the crowd cheers. Submitting to the heat, he takes off his jacket - after all, "we're among friends." People in the crowd wave their American and German flags with even more enthusiasm. 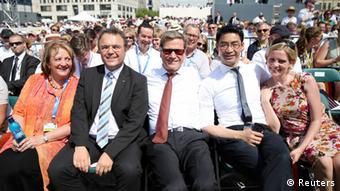 In the scorching temperature, most of the German cabinet admitted that it was summer

Obama, too, speaks of friendship, and appeals to the West to bring peace and freedom to the rest of the world. "The wall has long since become history," Obama says, in reference to the Berlin Wall. "Now it's up to us to make history!" Perhaps with nuclear disarmament, or in the fight against AIDS. The journalists take notes, fan themselves with their notebooks, continue writing, tap their smartphones and snap photos. Sweat drips on the bleachers.

With a "Thank you" and "God bless America - and Germany," Obama ends his speech. The president disappears with Merkel and Wowereit through the Brandenburg Gate, his arm around the chancellor's shoulder - a final photo opportunity for trans-Atlantic friendship. Everyone else has to meander along the safety barriers to exit the Pariser Platz.

German Interior Minister Hans-Peter Friedrich, on his way out, passes a journalist and leans in to whisper conspiratorially "Very American." Friedrich moves on, and the journalist shakes his head. "Well, I actually didn't find it that overblown," he says. A security official, his face slight sunburned, smiles as he thinks of home and the shade. Several of his colleagues have already collapsed in the heat.

A few blocks away, a queue has formed in front of an ice cream parlor. The snipers are gone - the windows in the editorial office, however, remain closed.

Barack Obama’s speech at the Brandenburg Gate won’t go down in history. But for DW’s Jefferson Chase – an American in Berlin – there’s much to like about a low-key US president. (19.06.2013)

There's disappointment in Europe at Barack Obama. The hopes of his presidency have scarcely been fulfilled. But he still seems like the best man for the job. DW looks at how the relationship has changed. (18.06.2013)