In Jerusalem, protests and celebrations of Palestinian prisoner release | World| Breaking news and perspectives from around the globe | DW | 31.12.2013

In Jerusalem, protests and celebrations of Palestinian prisoner release

As Palestinians celebrate the release of family members, Israelis protest what they see as a bitter deal. Neither side is happy with international peace efforts. 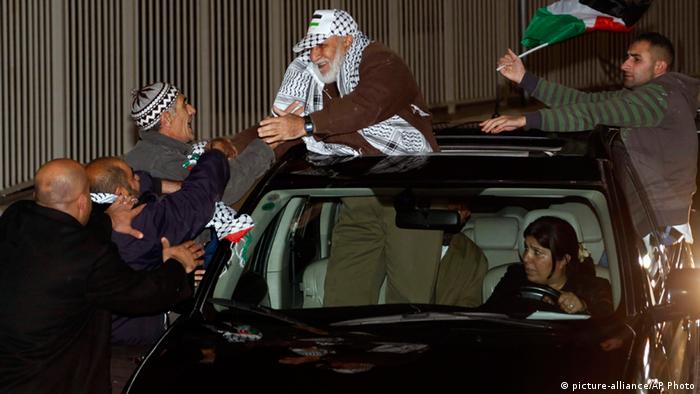 A group of up to 20 Israeli protesters huddles around two gas braziers to keep warm in the Jerusalem winter in an open-sided makeshift tent surrounded by banners, placards and leaflets opposing the release of 26 Palestinian prisoners.

Among the protesters was Yakov Tuboul, whose son, Lior, was murdered in 1990 by Ibrahim Shammasina, a Palestinian. Shammasina was released in 2011 along with 1,027 Palestinian prisoners as a result of an Egypt-brokered deal between Hamas and the Israeli government for the return of kidnapped Israeli Defense Force soldier Gilad Shalit.

Tuboul said he decided to protest in support of other families "who would experience the pain of the release of the person who killed their family member." 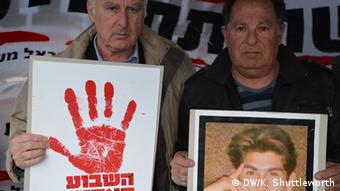 Yakov Tuboul (right), with Meir Indor, holds up a picture of his dead son Lior

Another protestor outside Netanyahu's residence is Ortal Tamam, 25, who was protesting the release of four men convicted in the murder of her uncle, Moshe Tamam, in 1984.

"These men are cold-blooded murderers and they have blood on their hands. The public does not support their release," she said.

The small group snapped into action at the guarded barrier to the residence, chanting "Titbayesh," which means "shame on you" in Hebrew - and waving placards displaying bloodied red hands.

Meir Indor said the protesters had targeted Netanyahu's premises because "for Israelis, in the end everything is personal."

Lizi Hameira, 38, from Tel Aviv, was directing her protest at the recent release of Samer Issawi, 34, who was let out from Shita prison in northern Israel a week ahead of the planned release of the 26 other Palestinian prisoners. 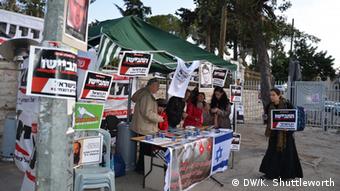 The protest camp outside of Benjamin Netanyahu's residence in Rehavia, Jerusalem

"The story of Issawi is the climax of absurd. He was released during the Shalit deal and he returned to terror. He was arrested again and because of a hunger strike, a judge allowed him to be released last week," Hameira said.

Hameira added that Issawi was apparently filmed at his release saying that Israeli soldiers should be kidnapped.

Celebrations in the small community of Issawiyeh in East Jerusalem have been in full swing for over a week now.

Shireen Issawi, the sister of Samer Issawi, said 2,000 people gathered in the small suburb to celebrate her brother's release. As DW interviewed the Issawi family, a constant stream of visitors arrived at their home - most of them strangers. Some had come from as far afield as Germany, the United States and South Africa.

Samer Issawi spent nearly 10 years in prison after being arrested in Ramallah in 2002 in connection with shooting attacks. He began his nine-month hunger strike in July 2012 to protest his re-arrest after Israeli officials said he had breached the terms of his release by leaving Jerusalem and entering the West Bank.

During his nine-month hunger strike, Issawi survived on water fortified with vitamins and electrolytes. "I had no choice but to starve myself in protest of the imprisonment and wider conditions of the prisoners in Israel," he told DW.

After he'd lost half his body weight in April 2013, doctors became worried Issawi would die: "My heart beat reached 24 to 28 beats per minute. The doctor told me it was getting dangerous as my heart could stop beating at any moment, and I had the option of either going back to Jerusalem or dying."

Israeli and Palestinian officials brokered a deal, agreeing that Issawi would serve another eight months and would then be released to his home in Issawiyeh. 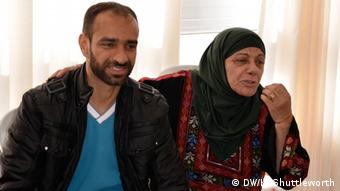 Released prisoner Samer Issawi, pictured here with his mother, went on a hunger strike to protest his arrest

Today, Issawi looks healthy - although he can still barely stomach solid food and his prolonged hunger strike has caused long-term damage to his body. He said his suffering was nothing compared to that of other Palestinian prisoners, who, he said, were not being attended to by Israeli prison staff.

"My story is really nothing - there are Palestinians in Israeli prisons suffering from cancer, paralysis and many of them are dying due to the medical ignorance of the Israeli prison staff," he said.

USSecretary of State John Kerry is due in Israel for peace talks on New Year's Day, but both Palestinians and Israelis are becoming increasingly disgruntled with US efforts.

Issawi called the negotiations "useless," pointing to the Israel's government decision to expand its settlements in the West Bank.

"Building continuous settlements is a sign that there will not be peace between them in the near future," he said. "The occupation does not want peace. There is a national decision that all the lands in the occupied territories should be cleared for settlements," he claimed.

Over 2,000 Israeli protesters gathered outside Ofer prison in the West Bank on Monday to voice their indignation at the government's decision to release more Palestinian prisoners. (29.10.2013)