Berlin is seen as the epitome of cool, urban grittiness. But insiders know it as one of the most nature-filled cities in Europe. Between green space and water, nearly half the capital belongs to Mother Nature. 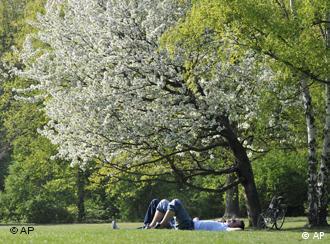 Just what role ongoing development will play in the city's status as a green oasis remains to be seen, however.

In 1930, French diplomat and writer Jean Giraudoux wrote that Berlin is "no city of gardens [but] a garden itself." This might seem a strange claim when viewing the clutter of misshapen tenements and concrete socialist dystopias that mark Berlin today. But for its many shades of gray, Berlin still possesses unparalleled riches of open space, from the vast Volksgärten, or people's parks, to city forests like Grunewald, to the Central Park-like Tiergarten.

Then there are ubiquitous post-Wall wastelands and death-strips turned green havens - and more recently, an immense decommissioned airport in which Berliners are free to run wild. These vacant spaces are a pivotal part of Berlin's identity, buttressing the city's open and laid-back persona.

"In the European context, Berlin is a very green city. Forty-six percent of the whole area is green or water," explained Beate Profé, head of the Berlin Senate's Open Space Planning unit and a key player in urban development in the city.

With birds skipping in a green square beyond her office window, Profé confirmed, "Berliners love these green spaces, and use them very intensively."

Proud tradition of parks and gardens

She's right. At the first hint of sunshine, Berliners flood the squares, parks, forests, canals and green wastelands of their city, and they bring their dogs, beer, food, Frisbees, tightropes, badminton, bicycles, books and children with them. 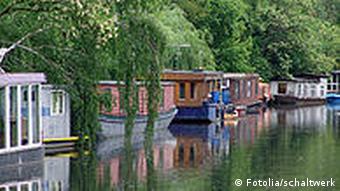 Much of Berlin is on water - like these Spree houseboats

It's a proud tradition shaped in part by the Wall years when West Berliners - effectively trapped on a fortified island - were forced to utilise inner urban green spaces for recreation. Yet even after 1989, when free to go beyond the city limits, these Berliners stayed true to their beloved urban oases, says Profé.

Berlin's profusion of public space was initially born of poverty and social decay, the evils that accompanied the rapid industrialisation of the city. Unlike Rome or Paris, the relatively new Berlin metropolis was able to meet this problem with some progressive urban planning, establishing huge "people's parks" as a panacea for poor health and sanitation in overcrowded working-class districts.

Space was also set aside for urban allotment gardens, allowing landless workers to grow vegetables in the city center. These gardens also kept much of the city alive when famine gripped wartime Berlin. Today, over 75,000 of these quaint Kleingärten remain, stalwarts of the city's green infrastructure - now complemented by ubiquitous "guerrilla" gardens that are literally springing up from the Berlin concrete.

Then there are the forests, predominantly in the west and south-west of the city, that were preserved through the pioneering efforts of some fin de siècle environmentalists. Again, social and health concerns in Europe's fastest growing city animated a "significant public campaign to save the Grunewald and other forests around Berlin," wrote Jeffrey K. Wilson in his book "The German Forest: Nature, Identity, and the Contestation of a National Symbol, 1871-1914."

From a high office in a neglected old building utilised by Berlin artists, Horst and Matthias Einhoff surveyed a typical empty expanse of grass and sand fringing the Spree River. The duo is part of an artist's collective, Kunst Republik, which found a similarly abandoned space in 2006. They turned it into an open art installation space known as Skulpturenpark.

Beyond the Reichstag, a world of trees and green space in Berlin

"There were fences around it and plants were growing wild. We discovered it because we had our studio right next door," Einhoff explained.

Encouraging use of temporary space

Indeed, post-Wall dreams of population growth and grand urban renewal have only been partially realized in the long-bankrupt city, and temporary use of vacant urban space has been part of Berlin's urban identity since the war.

The obsolete stretch of militarized no-man's land that ran alongside the Wall was typically colonized by residents who, along with their dogs, now enjoy the meadows and clutches of saplings. Artists, too, have found a tangible use for the space which the property market has shunned up to now. But the future of these disused spaces is uncertain.

"These spaces are shrinking. There's not so much left, and many people want it," said Horst, adding that artists and property investors each want to develop empty space in their own way.

"We don't want a city park with city park rules," he said. "There's always these kind of grey zones for these transition spaces which are interesting. What we all appreciate about this space is the openness."

While the Berlin Senate once plugged mega-scale urban development policies, especially the much-derided Media Spree, it, too, has recently come to appreciate more creative utilization of Berlin's unique urban frontiers.

The government commissioned the 2006 book "Urban Pioneers," edited by progressive urban landscape architect Klaus Overmeyer, which showed skate-parks in abandoned industrial estates and farms established along the old Wall. The Senate now plans to unleash these interim users on the city's unused spaces. 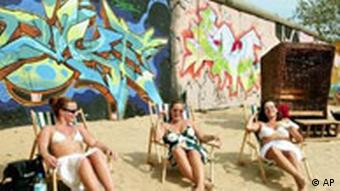 "We want to transport successful examples of these temporary users to Tempelhof Park," said Profé, adding that four hectares of the park will be used by so-called "urban pioneers" as early as this spring. But this might only be the beginning. At nearly twice the size of the Tiergarten, the 380 hectare (940 acre) Tempelhof airport, which was turned into a park in 2010, is larger than New York's Central Park.

Profé says at least two-thirds will remain open space - the winner of a Europe-wide competition to landscape design the park is set to be announced in mid-April. Moreover, plans to close Tegel airport are in the works, and that closure would contribute an immense 460 hectares to Berlin's expanding green ledger.

If this wasn't enough, Berlin is also transforming long decommissioned industrial and transport zones into blossoming green space. Gleisdreieck Park, located on the former site of the Potsdamer freight station that came under the control of the GDR-operated Reichsbahn - it ran all train lines in the city after division - will also feed Berlin's hunger for public space when it part opens in September 2011.

Gleisdreieck has been the beneficiary of a federal law that forces developers to offset land development by investing in an equivalent amount of green space. Thus the payoff for erecting the glass towers that encase Potsdamer Platz was that 22 million euros ($32 million) went into building Gleisedreiek Park.

Further south along the same old freight lines, the Schöneberger Südgelände Nature-Park has emerged organically from a former railway switchyard, once among the biggest in Berlin. In the 60 years since the once bare and poisoned industrial yard was left to lie fallow, a forest of birch and oak grew up across the train tracks, and over time local residents began to make the area their own. 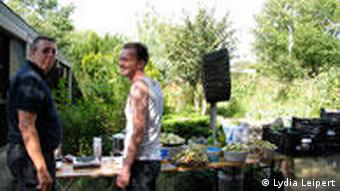 Due to legislation protecting it, Schöneberger Südgelände's future is certain. But many fear that much other vacant space will be developed, and that part of Berlin's identity will be lost in the process.

"What I like about the city is that there's these weird spaces in between spaces and you don't know what's going on," Einhoff said, referring to Berlin's transforming spatial character. But he's concerned for the future.

"I mean these spaces are becoming less and less. Eventually you'll have a little Manhattan where everything has been negotiated. Like in Mitte, where everything is cultivated and developed."

Profé is more sanguine. "Berlin will develop over a long time, step by step. In 20 and 30 years we will still have open space in the centre of the city for the creative scene in Berlin. Some real estate will be constructed, yes, but not all. We have so much of this kind of open space."

Riding waves in the middle of the city? A river in Munich's English Garden has hosted surfers and curious spectators alike for 30 years. Although long forbidden, experienced surfers can now ride the waves legally. (05.09.2010)

Once the focus of the famous airlift to save Berlin from the clutches of communism after World War II, Tempelhof airport has been transformed from "the mother of all airports" into a public park. (08.05.2010)