In Germany, disease prevention for refugees varies from state to state | Germany| News and in-depth reporting from Berlin and beyond | DW | 16.09.2015 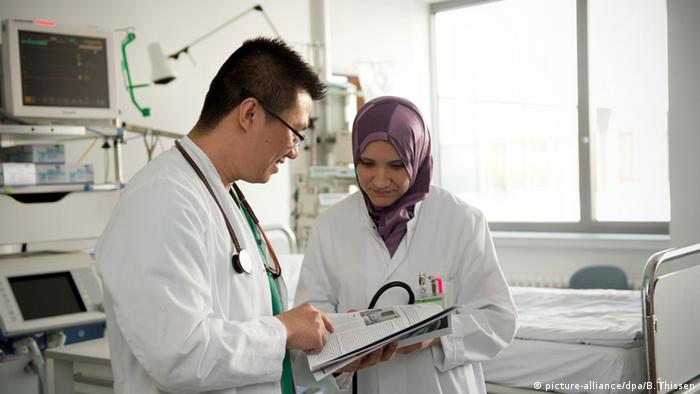 As Germany stocks up on tissues, vitamins and homeopathic teas this autumn in preparation for cold season, health officials across its 16 states are in close contact with federal health advisers over how to prevent a health crisis among their newest patients: around a million refugees.

Hundreds of thousands of people from Syria, Afghanistan, Iraq, Eritrea, Pakistan, Nigeria and several Balkan states bring with them medical histories strongly shaped by years of conflict and deprivation. Added to that is a perilous journey involving weeks or even months of poor hygiene, overcrowding and stress.

However, health experts warn that it's a misconception to fear the spread of disease with a high influx of refugees, even though limited vaccination coverage in their own countries of origin make them more likely to become infected.

"There is no systematic association between migration and the importation of infectious diseases," Dr. Guenael Rodier, a director at the World Health Organization's European branch, told DW. "Refugees and migrants are exposed mainly to the infectious diseases that are common in Europe, independently of migration."

According to the WHO, providing vaccination upon arrival and adequate health care as soon as possible are among the best preventative measures. 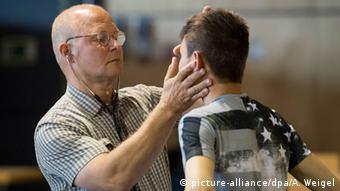 Following federal guidelines, states have leeway when it comes to screening refugees for illness

Indeed, preliminary information requested by DW from a number of health ministries across Germany confirms that few outbreaks have occurred at refugee shelters. Health officials remain confident that these scenarios can be brought under control in the future as well.

"Chickenpox and measles have popped up thus far, but those are illnesses that occur, of course, here in Germany in schools and kindergartens to the same degree," said Christoph Söbbeler, the spokesperson for the local government of Arnsberg, which oversees North Rhine-Westphalia's refugee centers.

"No one wastes his breath about these issues because it's part of the daily grind. But we're well aware that we must carefully observe and keep a tight grip on the health situation.

"Planning ahead, thinking ahead and organizing ahead" have been key to containing any illnesses thus far, he added.

The western German state, which shares a border with the Netherlands and Belgium, has received more than 20 percent of asylum seekers this year. And it, like Germany's other states - including the city-states of Berlin, Hamburg and Bremen - must define its own health care rules for refugees under special federal legislation which, among things, helps finance medical costs.

Newcomers must undergo a rudimentary medical exam within days of arriving at a refugee processing center. Doctors screen for specific diseases depending on the state's regulations. North Rhine-Westphalia (NRW), for example, only screens for tuberculosis, while other states, such as Bavaria, go as far as screening for HIV and hepatitis B. 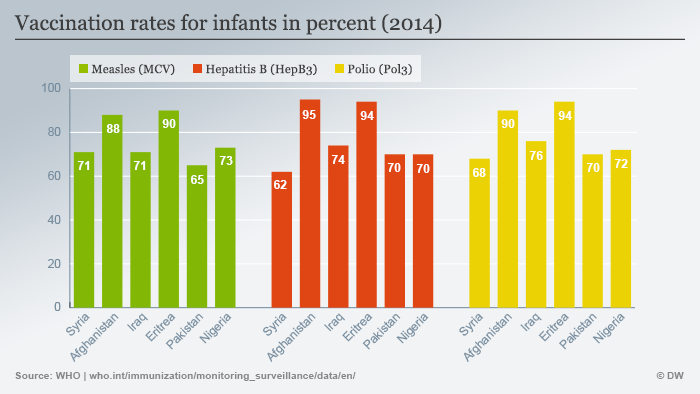 Vaccination policies also vary, given that Germany does not have an immunization law. While some states - such as NRW - offer the standard vaccines for measles, mumps and chickenpox in refugee processing centers, neighboring Lower Saxony, by contrast, has only been able to introduce this measure at one location.

Information on the number of asylum seekers who've received vaccines has not been released. However, according to Söbbeler and health ministries in four other states who responded to a request from DW, the vast majority who need vaccines also take the opportunity to get them.

Germany's asylum seekers should be viewed as an "endangered group" rather than "a group which poses a danger to public health," said Andreas Gilsdorf, who heads the department of infectious disease surveillance at the Robert Koch Institute, Germany's top center for biomedicine. 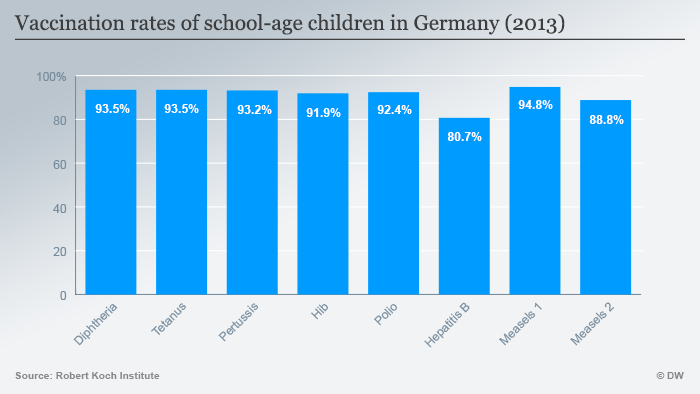 According to Gilsdorf, health safety in Germany has a strong foundation in its own vaccination rates.

"We're mainly concerned with protecting the refugees who arrive here," he said, pointing to the need for swifter registration as a key step toward providing adequate medical care.

The chances of up to a million more people needing vaccines has thus far not posed a problem either, with health officials from Germany's federal vaccine regulator, the Paul Ehrlich Institute, saying that pharmaceutical companies have given no indication of a vaccine shortage this year.

Chancellor Merkel pledged more federal support to German states responsible for housing tens of thousands of refugees entering the country. Leaders have said they intend to reorganize how refugees are settled in Germany. (16.09.2015)

Rising numbers of refugees have proved to be a major challenge for physicians as well as government authorities. Treating children can be tricky, points out pediatrician Eckard Hamelmann. (13.08.2015)