The Group of Seven industrialized nations has kicked off a two-day summit at a luxury resort in Bavaria. Going into Sunday's G7 meeting, talk was dominated by civil war in Ukraine and a credit crunch in Greece. 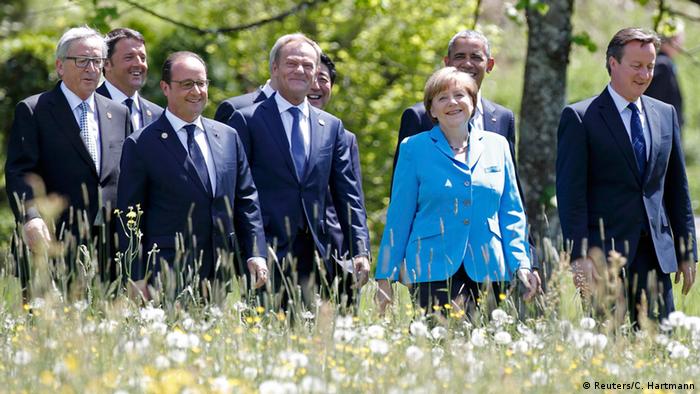 Journalists and policemen based in and around Garmisch-Partenkirchen's quaint timber-frame guesthouses and hotels woke on Sunday morning to the sound of helicopters hovering above the usually tranquil Alpine skiing resort nestled among snowcapped mountains in southern Germany: They were shuttling camera teams and journalists to the Schloss Elmau, the luxury castle where leaders of the Group of Seven - the United States, UK, Canada, Italy, France, Japan and Germany - were set to arrive for their annual summit.

This year, G7 leaders planned to discuss a wide range of topics behind closed doors, including global trade, ensuring more sustainable supply chains, new Millennium Development Goals, international terrorism, and the civil wars and standoffs in the Middle East, Ukraine and the South China Sea. Other planned topics include climate change, the Transatlantic Trade and Investment Partnership between the EU and US, commonly known as TTIP, and lessons learned from the most recent Ebola outbreak, as well as how to respond to other tropical diseases. 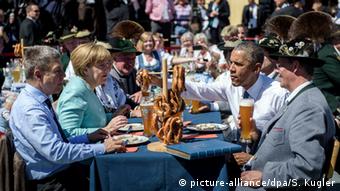 German Chancellor Angela Merkel and US President Barack Obama, the first foreign leader to arrive, kicked off the day by joining locals dressed in dirndl and lederhosen for a Bavarian show of beer, pretzels and oompah music in the nearby village of Krün. But before the camera teams zoomed in on Obama, Merkel and Bavarian dignitaries as they tore into the local delicacies, both leaders issued stark warnings to Russia over what the US president called Vladimir Putin's "aggression" in Ukraine.

At a press conference, EU Council President Donald Tusk, who is also attending the summit, said he wanted to "reconfirm G7 unity on sanctions policy." Russia, he said, would stay out of the G7 "community of values" as long as it "behaves aggressively with Ukraine and other countries."

Russia joined the G7 nations in 1998, creating the Group of Eight, which became the Group of Seven again last year after the other leaders kicked the country out over its interference in Ukraine. Following the annexation of Crimea by Russia, the United States and EU also imposed sanctions on Russian individuals and businesses.

Thousands of demonstrators took to the streets in the Alpine resort of Garmisch-Partenkirchen, where G7 leaders are meeting on Sunday. As Naomi Conrad reports, peaceful protests turned into skirmishes. (06.06.2015)

EC President Jean-Claude Juncker says Greece has not yet presented a counterproposal to an EU loan deal Athens rejected last week. But he reaffirmed that a Greek eurozone exit was not an option. (07.06.2015)

Greece high on the agenda

In a bilateral meeting, Obama and Merkel also discussed financially ailing Greece. According to a White House spokesman quoted by news agencies, the two leaders agreed that the country must reform and return to sustainable long-term growth. Greece's government has been locked in negotiations with its creditors to reach a last-minute deadline before the country has to repay a 300 million-euro ($333.5 million) loan to the International Monetary Fund by the end of the month.

The seven leaders had much more on their agenda than Greece and Russia, however, as the cameras left the room ahead of the first of the six off-the-record meetings that make up the summit. This year, Germany is also pushing for a pledge to create the Vision Zero Fund, which would guarantee sustainable supply chains by financing preventative measures to guarantee safety standards, such as fire safety measures.

Jörn Kalinski, the director of advocacy and campaigns for Oxfam in Germany, told DW that the Vision Zero Fund "would be a very big and important step forward. We should really end this perverse situation where we have our economic prosperity based on human rights violations and ecological sins committed in the developing world."

However, Kalinski, one of several NGO representatives gathered in the press center, added that he was "a little pessimistic" that the initiative would receive much concrete support from the other G7 countries, which face strong lobbies for multinational companies at home.

As is usually the case during such meetings, activists expect few concrete binding commitments in the 15-odd page communique set to be released after the summit closes on Monday afternoon.

The G7 began in 1975 as the Group of Six, with all the same nations, except Canada. Detractors say the group's annual summits are excessively expensive and lead to too few concrete results. They note that other forums, like the United Nations or even Group of 20 meetings, include poorer countries. The G7's critics say the more-inclusive meetings have proved much better at tackling issues that require a global response, such as climate change or trade policy. 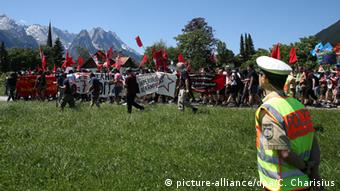 A variety of causes united to oppose the G7's agenda

Other dissenters reject the idea of globalization more generally. They include many of the demonstrators who took to the streets on Saturday in Garmisch-Partenkirchen, among them anarchists, Kurdish activists and even a Hare Krishna monk. Police mobilized from across Germany clashed with the protesters several times. However, the large-scale violence many had feared did not materialize.

On Sunday, several hundred protesters hiked for hours along a steep track through the mountains to reach the security perimeter around Schloss Elmau before being turned back by police. Frank Duden, an organizer of the demonstration, told DW's Sabrina Pabst, who accompanied the protesters on their march, that he was there because G7 leaders only made "decisions on behalf of companies and very rich people." Rather than spending money on hosting an expensive summit, Duden said, the funds should be used "to build a better world in Africa, Asia or South America."