In celebration of the Berlin corner shop - and creative integrity | Culture | Arts, music and lifestyle reporting from Germany | DW | 03.09.2010

In celebration of the Berlin corner shop - and creative integrity

A low-budget film released in Germany this week takes a look at that quintessentially Berlin phenomenon, the late-night corner shop known as the "Spaeti."

In 1995, director Wayne Wang made a highly acclaimed movie scripted by writer Paul Auster called "Smoke," which was set in a tobacco store in Brooklyn. This week saw "Tom Atkins Blues" hit a handful of Berlin independent cinemas. It was directed by an old friend of mine from London called Alex Ross - who also stars - and even though I've never asked him, my guess is that "Smoke" could well be one of his favorite films.

A blend of fiction and documentary, this new release about a Berlin storekeeper who dispenses wisdom, groceries and beer is a similarly affectionate collage of neighborhood life and shares its downbeat, unpretentious charm.

A sense of belonging

I first met Alex in 1995. His debut feature "Jacob's Ladder" had already picked up an array of first film awards, but instead of taking the opportunity to propel himself into the premier league of British filmmaking, he'd skipped town and moved to Berlin, where he was working for a moving company and occasionally helping out at a late-night corner shop in the Berlin neighborhood Prenzlauer Berg.

The Spaetkauf, or Spaeti, as these neighborhood 7-Elevens are called in Germany, are something of an institution in former East Berlin, originally catering to shift workers looking to whet their whistle on the way home.

They would've been superfluous in the West, where anyone who needed an after-hours carton of milk or a packet of cigarettes could pick them up at the nearest petrol station. But they served an important function in the city's traditionally working-class districts and continued to thrive after reunification not only as convenience stores, but also as laid-back watering holes where you could chat with the regulars and start a tab for your beer.

Very much a neighborhood kind of guy, Alex was in his element in the makeshift, candlelit environs of the Spaeti on Chorinerstrasse, and behind the till, he was at least as warm and welcoming as Auggie in "Smoke." 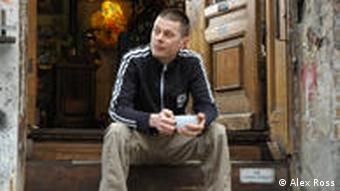 The store on Chorinerstrasse is a local landmark

With its crumbling facade covered in ivy and gentle ska beats drifting through its always open door, this quirky store has been a local landmark for nearly two decades, but it was probably during Alex's reign that it experienced its heyday.

The sort of filmmaker whose low-budget independent movies have always been based on his own life, it's not surprising that with "Tom Atkins Blues," Alex has paid homage to this time with a nostalgic nod to a bygone era - an era when Prenzlauer Berg still had a sense of community, and people felt like they belonged.

"The shop is all about bringing people in," he says in the film. "Setting up a vibe, you know, music floats out onto the street and it entices people in....But it's not just about enticing them in to buy something, it's like, be part of our world....And people wanna be, I think."

In the mid-90's, most people living in Prenzlauer Berg had been attracted by rents that wouldn't have got them a garden shed in any other big European city, and spent their days doing anything but earning an honest wage.

But Alex wasn't like that. Aside from helping out at the Spaeti, he and the boys at the moving company worked like oxes, despite smoking industrial quantities of weed. His job ensured he was always a welcome guest, usually showing up with a piece of reject furniture he'd picked up in the course of the day.

One day he appeared on my doorstep with a washing machine - a rare and precious commodity at the time - and on another occasion he rang my bell to ask if I fancied a leather three-piece suite stashed in the back of his truck outside on the street.

The business eventually folded, though not before Alex had funneled the experience into a romantic comedy called "Move on Up" which won him not only a prestigious Grimme TV award in 1998, but also the attentions of commissioning editors at ZDF, Germany's second largest public broadcaster.

But like many old-school Berliners - be they native or honorary - Alex works best when he's out of the loop. Going mainstream didn't suit him, his next film wasn't a great success, and it wasn't just his career that floundered under the weight of too much respectability. 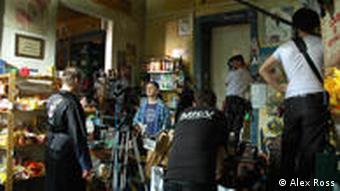 Alex didn't bother waiting for funding before shooting his film

Gentrification had hit Prenzlauer Berg hard. The district had changed irrevocably, and the upgrade left little room for the lost souls and locals who collected at the store on Chorinerstrasse, still as resistant to change as Galapagos tortoises.

Then there was the bright and shiny new supermarket which opened round the corner, staying open till midnight. It didn't quite manage to kill off the Spaeti, and even now, it's bravely hanging on in there.

But the crowd depicted in "Tom Atkins Blues" that used to sit outside on benches, swigging beer, strumming guitars, playing chess and philosophizing, is long gone.

These days, as the people who work there are all too aware, neighborhood camaraderie is no longer much of a selling point - even if ultimately, it's the Spaeti's only selling point.

A friend of mine, who recently moved in opposite it, told me that she'd gone there one Saturday to buy a few things for a late breakfast when she couldn't face the queues and labyrinthine aisles of the supermarket. "You could get all this much cheaper over there, you know," the guy behind the counter said, looking puzzled.

Today's Prenzlauer Berg is a far more anonymous place than it was 10 years ago. Back then, in 2001, Alex and his family were unceremoniously turfed out of their rented apartment when it was sold to private owners who'd decided they wanted to live in it themselves. Alex opted for voluntary exile, and settled in what was then one of Berlin's furthest frontiers, and as far away from yuppies as he could get: Neukoelln.

But in the German capital, the process of urban renewal is inexorable. These days, this part of town that used to be a byword for failed integration and schools that need a police presence is poised to go the same way as Prenzlauer Berg, as hipsters move in and claim it as their own. It's gotten so bad that, taking their cues from New Yorkers who like to give new neighborhoods new names, they've dubbed the area “Kreuzkoelln” (an amalgamation of Neukoelln and its neighboring district Kreuzberg).

Alex would probably choke if he used this term, and I have no doubt that he's already wondering where he should move to next.

Made in just a few days on a budget of 2,000 euros (about $2,500), "Tom Atkins Blues" shows that his creative energy hasn't been sapped by the pressures of Berlin's increasingly cut-throat film industry, and it's good to see someone working entirely on their own terms.

Alex could have sold out and ended up writing dreary TV dramas for a living. Instead, he's still cultivating his fighting spirit in true Berlin tradition. His latest film serves as a reminder that Prenzlauer Berg used to be teeming with colorful characters and places, and it's lost them all as it's become more affluent. It's a duller place for it, and this modest little film is a poignant testimony to a time when it felt like a village, and not one of Europe's most exciting capitals. Why would anyone want to live in that?

Letterpress printers are an island of tradition in modern Berlin

Germany is the birthplace of the modern printing press and, even today, Berlin is home to a number of letterpress printers. DW's Gerhard Schneibel found out why printed books hold a magic he'll never find on a screen. (27.08.2010)