Improved travel conditions give relief to snow-struck Germany | Europe| News and current affairs from around the continent | DW | 22.12.2010

German airline Lufthansa plans to run a largely normal schedule Wednesday, after days of delays across Europe caused by winter weather. The European Commission has criticized the industry's response to the snow and ice. 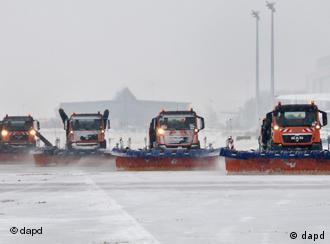 Relief may be in sight for travelers

The German travel industry is looking to mobilize and clear its growing backlog of international and domestic travelers whose holiday plans have been disrupted by days of heavy snow and ice. Plane and train operators are hopeful that the travel freeze will begin to thaw on Wednesday.

The country's biggest airline, Lufthansa, announced on Tuesday evening that it intended to return to a standard long-haul flight schedule on Wednesday, after days of delays, cancellations and other disruptions. For almost a week, Lufthansa has been running a skeleton service in response to the snow and ice across much of Europe, but spokesman Thomas Jachnow told reporters that Wednesday's promising weather forecast had enabled the airline to plan to run more planes.

Flights to the particularly hard-hit British hub London Heathrow, however, would probably remain subject to delays or cancellations, Jachnow said.

Lufthansa's domestic services are not expected to return to normal yet, and the airline is still advising domestic travelers to seek alternative transportation if possible. 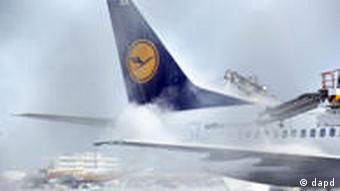 Lufthansa wants to get back to business as usual

The national rail operator, Deutsche Bahn, announced that it would put a special long-distance timetable into service on Wednesday, designed to provide extra trains for the holiday rush.

"We are considerably overburdened," long-distance chairman for Deutsche Bahn, Berthold Huber said. Deutsche Bahn intends to concentrate on some of its busiest north-south and east-west routes, pulling some of its high speed trains away from less busy lines in a bid to meet demand. Huber said that roughly 50,000 extra passengers per day were seeking long-distance train tickets over the holidays.

On Tuesday, long-distance Deutsche Bahn trains faced average delays of between 20 and 25 minutes, and some services were canceled altogether.

"Every train that's fit to roll is out on the tracks," Bahn chairman Ulrich Homburg said, apologizing for the problems.

The European Commission on Tuesday slammed transport providers for not dealing well enough with the recent freezing weather conditions. 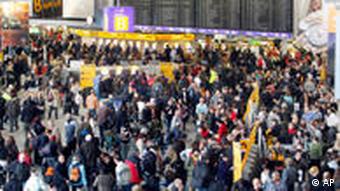 "I am extremely concerned about the level of disruption to travel across Europe caused by severe snow," the European transport commissioner, Siim Kallas, said in a statement. "It is unacceptable and should not happen again."

Kallas was particularly critical of the level of disruption at airports, and said he would meet with airport officials in the next few days to "ask for further explanations" about what has gone wrong and to "take a hard look" at how to operate more effectively in the future.

He said that further regulation of the industry might be necessary to ensure that "minimum service requirements" are maintained. Kallas was particularly critical of the snow-clearing infrastructure available to airports, describing this as the "weak link" in the chain.

Eurocontrol, the European air traffic supervisory body, said about 3,000 flights had been canceled across the continent on Tuesday, with a similar amount of planes remaining grounded on each of the four previous days.

London Heathrow, Europe's largest airport, canceled around two-thirds of all flights on Tuesday. However, it was able to reopen its second runway late in the day, prompting hope that the situation might ease.

Other large German hubs like Munich, Stuttgart and Hamburg reported fewer problems with their runways on Tuesday, but added that services to and from the more heavily affected airports were still subject to disruptions.

Several days of snow and ice have proven to be a headache for German companies. Blocked freeways have cut off supply lines for car manufacturers, gas stations and delivery companies. (22.12.2010)

With Christmas just a few days away, travelers remain stranded around northern Europe. Thousands have been spending their nights in airports hoping their flights will take off. (21.12.2010)

European air travel is still frostbitten as the holiday season approaches. Officials at Germany's largest airport in Frankfurt have confirmed that at least 540 flights were canceled on Sunday due to bad weather. (19.12.2010)