IMF suspends aid to Greece until snap election is completed

The IMF has said it won't finish Greece's latest bailout review until a new government is formed, after a snap election was called for late January. Authorities say the temporary suspending of aid won't hurt the economy. 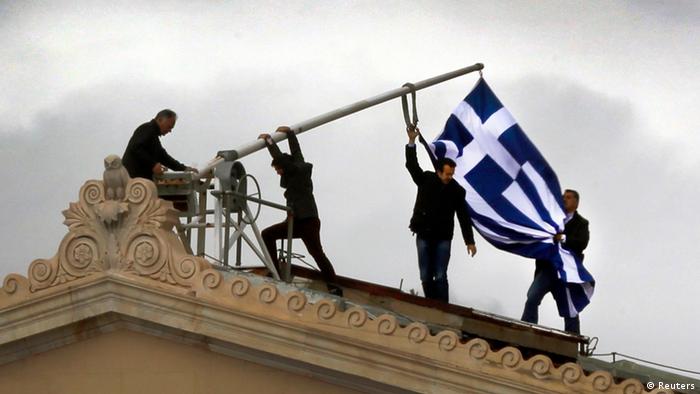 The International Monetary Fund said on Monday that financial aid to Greece was being suspended until a new government is formed.

Greek Prime Minister Antonis Samaras had earlier announced his intention to request early general elections, after he failed in a third attempt to get his candidate for president, Stavros Dimas, approved by parliament. Such a situation automatically triggers the dissolution of parliament under Greece's constitution.

The IMF said the holdup of its rescue program would not impact Greece's finances in the short term.

"Discussions with the Greek authorities on the completion of the sixth review of the program ... will resume once a new government is in place, in consultation with the European Commission and the European Central Bank," IMF spokesman Gerry Rice said.

The early election has sparked worries that Greece's far left Syriza party could dominate the legislature and roll back tough austerity measures that the IMF requires - and that Greece needs in order to qualify for billions in rescue funds.

Syriza has vowed to renegotiate the terms of Greece's international bailout if it gets into government. However a recent Aclo opinion poll shows that while it could become the strongest party, it might not win enough seats to govern on its own.

German Finance Minister Wolfgang Schäuble has warned Greece against moving away from its current economic reforms.

"The tough reforms are bearing fruit and there is no alternative to them," he said on Monday.

"We will continue to help Greece help itself on its path of reform. If Greece takes another path, it will be difficult. New elections will not change the agreements we have struck with the Greek government. Any new government will have to stick to the agreements made by its predecessor," Schäuble said.

Yields on bonds from the eurozone's preiphery jumped on Monday after Greece's parliament failed for a third time to elect a president, triggering a snap election. But Europe's main stock markets closed the day higher. (29.12.2014)