Gases from an Icelandic volcano are threatening to pollute the air of a nearby village and spread to the capital, Reykjavik, the Icelandic Meteorological Office (IMO) said on Friday.

Lava started spewing on Wednesday through an opening near Mount Fagradalsfjall, 40 kilometers (25 miles) from Reykjavik.

Concentrations of sulphur dioxide could reach up to 2,600 micrograms per cubic meter, a level considered "unhealthy for the sensitive," according to the Environment Agency of Iceland.

The weather agency said it expected particularly heavy gas pollution in Vogar, a village of some 1,000 inhabitants about 5 kilometers from the eruption.

Despite the concerns, visitors have flocked to the eruption in record numbers to marvel at the flow of lava.

According to authorities, more than 4,200 people walked the 14-kilometer round trip to the site on the Reykjanes peninsula in southwest Iceland on Thursday. 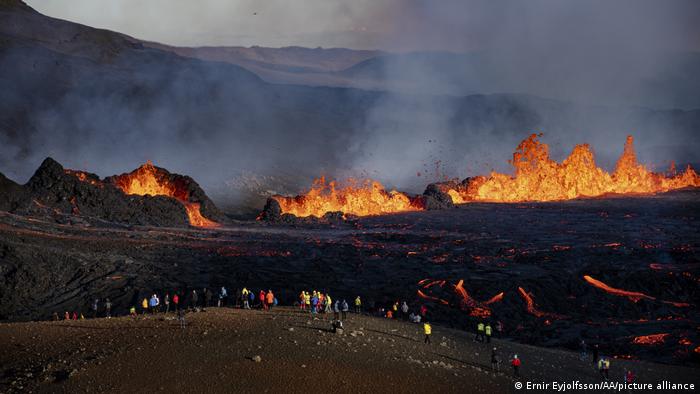 "You feel the power of the Earth. You look at the stone, and you see it melting — it is not a usual thing," said Agusta Jonsdottir, who undertook the trek.

"We came early, and we were sitting in the moss, watching and enjoying for a couple of hours. And it was so calm," Audur Kristin Ebenezersdottir said. "Just you and the nature — it's very nice."

Iceland is a seismic hot spot, with 32 active volcanic systems. Its Eyjafjallajokull volcano grounded around 100,000 flights in 2010, when it spewed plumes of ash and smoke into the sky for several weeks