South Korea's prime minister has been sworn in to replace disgraced President Park Geun-hye. Two hundred and thirty-four lawmakers voted to impeach Park - including some members of her own party. 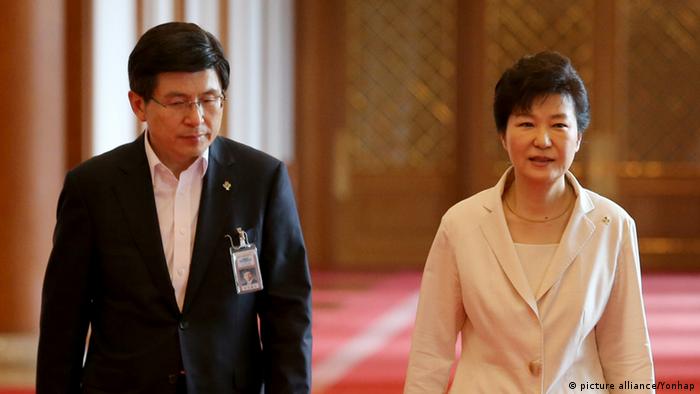 Hwang Kyo-ahn (left in photo), the new interim president of South Korea, has apologized for any role he might have played in the scandal that helped lead to Friday's impeachment of Park Geun-hye (right). The prime minister, who has never held elected office, has become the de facto commander of a military under constant threat from nuclear-armed North Korea.

"Dear South Koreans, the whole world is watching us," the 59-year-old Hwang said upon assuming his new role on Friday. "Please rally your support to overcome the challenges we face at home and abroad," he added.

Hwang told Foreign Minister Yun Byung-se that South Korea would need to closely cooperate with friendly nations to implement sanctions against the North for its nuclear weapons program. The premier's office also reported that he asked Yun to assure other countries that they should expect no major changes to South Korea's foreign policy. Hwang urged parties to cooperate to restore stability.

"I hope that Hwang will be able to properly read the public mood - including the longing for reform," said Democratic Party leader Choo Mi-Ae, who has previously criticized Hwang. "It is important for us to minimize political chaos at a time like this," she added.

Park had a 5 percent approval rating when lawmakers from her conservative Saenuri (New Frontier) Party joined with the opposition to impeach her by a margin of 234-56 in the 300-seat National Assembly.

Prosecutors say Park, whose five-year term was to end in early 2018, colluded with a former aide to extort donations from companies to foundations that backed her plans. Park has publicly apologized for the scandal and admitted that she had received help from her close friend Choi Soon-sil in editing her speeches and with unspecified "PR" matters, but denied involvement in her friend's alleged criminal activities.

After her impeachment, Park apologized to the nation for the "negligence" that led to her fall. "I solemnly accept the voice of the parliament and the people and sincerely hope this confusion is soundly resolved," she told her cabinet at a last meeting on Friday.

The Constitutional Court has up to 180 days to decide what to do with Park; elections would be held within 60 days should the tribunal permanently strip her of power. Front-runners in polls to replace her include UN Secretary-General Ban Ki-moon and former Democratic Party leader Moon Jae-in, who lost the 2012 election to Park by 3 percentage points.

Park managed to slip in a personnel change before her impeachment on Friday, accepting the resignation offered by Choi Jai-kyeong, presidential secretary for civil affairs, and naming lawyer Cho Dae-hwan to replace him.

The decision comes in the wake of a drawn-out scandal involving Park Geun Hye's friend and confidante Choi Soon Sil. The Constitutional Court now has up to 180 days to decide whether to formally end her presidency. (09.12.2016)