The measure has been taken in coastal areas as the state prepares itself for maximum sustained winds of 75 miles (120.7 km) per hour. Recently upgraded to a Category 1 hurricane, it might make landfall late on Friday. 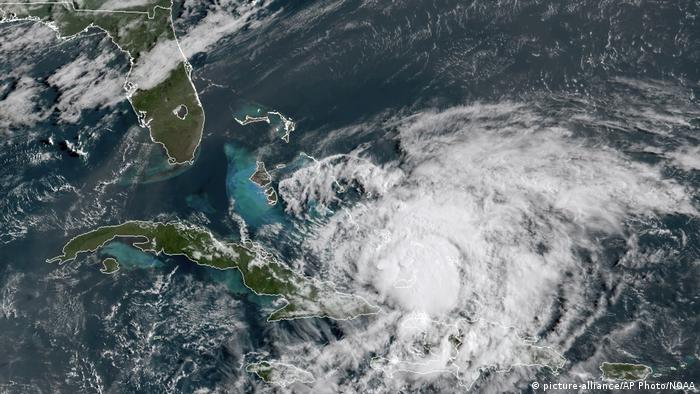 Florida Governor Ron DeSantis declared a state of emergency on Friday for counties on the Atlantic coast as Hurricane Isaias nears the mainland.

The tropical storm was upgraded to a Cateogory 1 hurricane late on Thursday, after achieving maximum sustained winds of 75 miles (120.7 km) per hour and has hit the Bahamas and the Turks and Caicos Islands en route for the US mainland. It could reach the state as early as Friday night, the US National Hurricane Center (NHC) said.

The weather monitor added that "isolated minor river flooding is possible in [North and South Carolina] early next week."

DeSantis: We are fully prepared

Governor DeSantis told media that he had signed an executive order for a state of emergency for east coast counties stretching from Miami-Dade in the south, to Nassau in the north. The order enables the state to mobilize resources much more easily.

"While current projections have the eye of Isaias remaining at sea, the situation remains fluid and can change quickly," DeSantis told reporters. "I want Floridians to know that the state of Florida is fully prepared for this."

Meanwhile, Miami-Dade's beaches, parks, marinas and golf courses were all due to close. County officials have also shut down drive-through and walk-up coronavirus testing locations.

"Our sites, because they're outdoors with tents, if it were to get 40, 50-mile-per-hour winds, it would just collapse," Governor DeSantis said regarding the COVID-19 testing sites. "Safety is paramount for that."

Florida, currently one of the worst-hit states in the US, recorded a single-day high of 257 COVID-19 fatalities on Friday.

While the first countries are easing their lockdowns, others are reporting more and more new cases every day. Data for the global picture shows the pandemic is far from over. DW has the latest statistics.

Hurricane Hanna has made landfall in eastern Texas, packing winds of up to 90 miles (145 kilometers) per hour. Despite later being downgraded, the storm is expected to bring flash floods to the state and parts of Mexico.