Hundreds of migrants heading to the US stopped in Guatemala 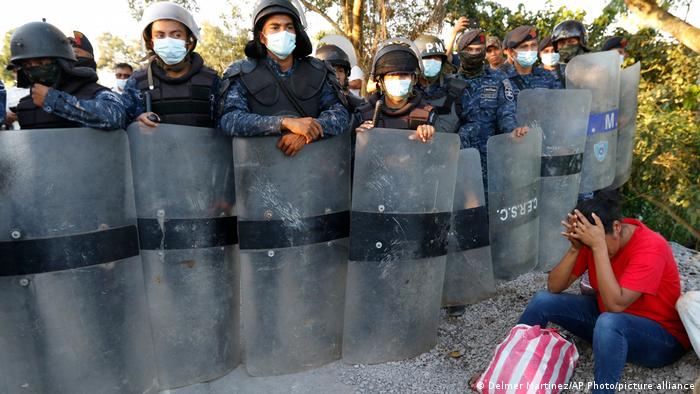 Hundreds of migrants were stopped by Guatemalan security forces as they attempted to continue north, with the end destination being the US

A migrant caravan made up of several hundred men, women and children was stopped by authorities in Guatemala.

Authorities said the group, who had set off from the Honduran city of San Pedro Sula on Saturday, was attempting to make its way across Mexico to the US border, nearly 1,200 miles (2,000 kilometers) away.

The migrants, many from Honduras and Nicaragua, had arrived in the Honduran border town of Corinto on Saturday afternoon. They then crossed into Guatemala, where hundreds of security personnel were waiting for them.

There was a violent confrontation with security officials, during which stones and other objects were reportedly thrown. Guatemalan police said that a dozen officers had been injured as they attempted to turn the group back.

According to the Guatemalan Migration Institute, discussions on returning the migrants to their home countries have begun.

"People are being returned, everything in order, humanely," the institute's general director Carlos Emilio Morales said.

Migrants wishing to remain in Guatemala are required to have identification, proof of vaccination, along with a negative COVID-19 test.

A photographer with AFP news agency reported seeing people without those required documents being turned back to Honduras. 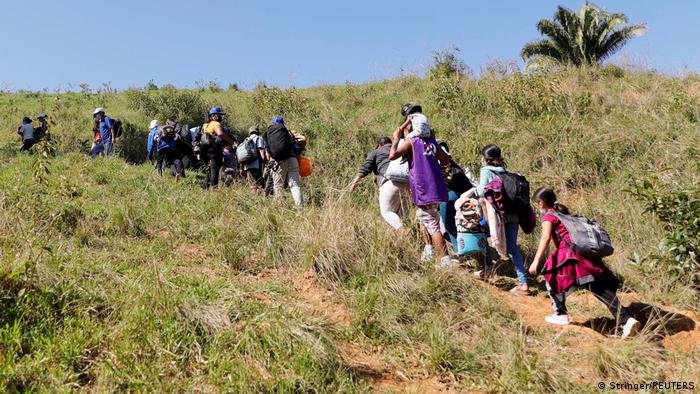 Those who manage to make it into Guatemala need to proceed continue for 1,200 miles (2,000 kilometers)

In search of a 'better life'

A Nicaraguan man called Ovaldo told AFP that his primary concern was "a better life for their family."

"There is no work," Pablo Mendez told Reuters news agency. The Honduran father was carrying his 2-year-old daughter in his arms. "That is why people are leaving in this caravan."

In January 2021, a much larger caravan numbering a few thousand was also intercepted in Guatemala, forcing many to return to Honduras.

Those in Saturday's group said they were making the arduous journey to escape poverty and violence and begin new lives. Many had been victims of natural disasters like floods and drought.

In September 2021, the Biden administration faced a flood of criticism over its handling of the thousands of migrants who had gathered underneath a bridge at Del Rio, at the US-Mexico border.

Images of US border guards on horseback chasing down migrants aggressively to stop from proceeding were widely condemned by rights groups.

At the time, the White House said what had happened was unacceptable and inappropriate.

Later in September 2021, the Biden administration announced that it would raise its cap to take in 125,000 refugees and their families starting in 2022.

However, in December, the US announced it would be reinstating a contentious Trump-era border program that forces asylum-seekers to wait in Mexico pending US immigration hearings.