Some 1,300 Danes gathered on Wednesday in Copenhagen and Denmark's second-biggest city of Aarhus to protest the new ban on face veils on the day that the controversial law went into effect. Activists have denounced the government for infringing on women's rights to choose how to dress.

The law was enacted by the Danish parliament in May, and its proponents have rejected the notion that it represents a ban on religious clothing.

Protesters in Copenhagen wore the niqab veil, which covers the whole body except the eyes, the all-enveloping burqa, and other face coverings. Demonstrators marched from the central district of Norrebro to Bellahoj police station on the outskirts of the capital, where they formed a human chain.

The rally lasted three hours. Protesters included a mix of Muslim and non-Muslim Danes, chanting slogans such as "no racists in our streets" and "my life, my choice." 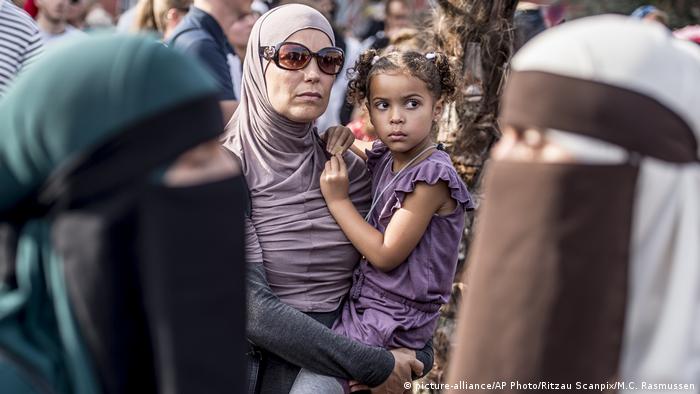 Demonstrators with full face coverings would not be fined during the protest, police said

Sabina, a 21-year-old student who did not wish to disclose her full name, was wearing a niqab at the march and explained to Reuters why she was speaking out against the law.

"We need to send a signal to the government that we will not bow to discrimination and a law that specifically targets a religious minority," Sabina said.

Read more: Column: I'm an Arab woman; am I oppressed?

Muslims make up around 5 percent of Denmark's population of 5.7 million. Of these, Sabina is one of approximately 150-200 Muslim women in the country who wear either the niqab or burqa and are directly affected by the ban. 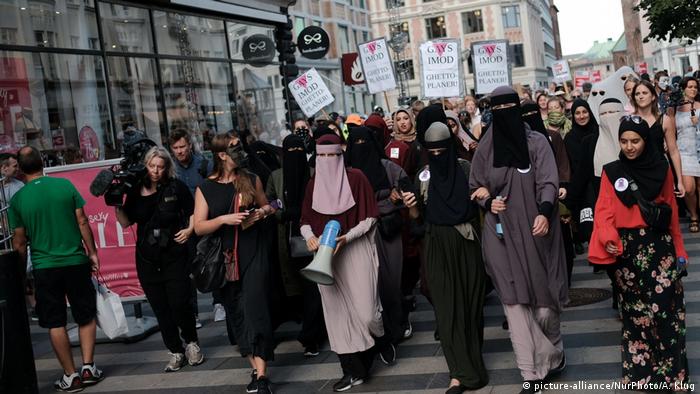 Under the law, police will be able to order women to remove their veils or leave public areas. The women will also face fines of 1,000 Danish crowns ($160, €138) for a first offense, rising to 10,000 crowns for a fourth.

Authorities said that the fines would not be applied to the veiled women during the protests since certain uses of face veils, such as to exercise freedom of speech as part of a peaceful protest, are exempt from the law. 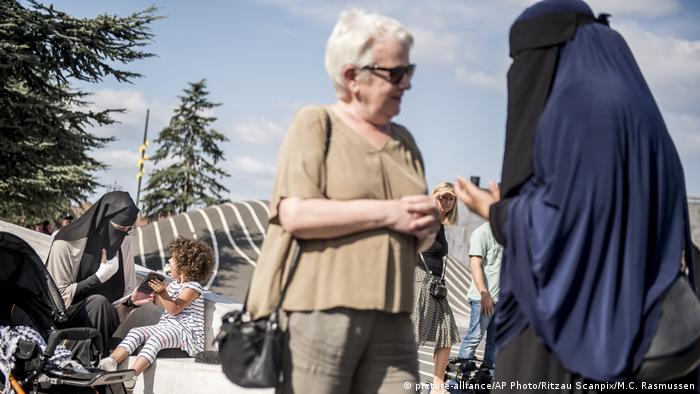 Both Muslim and non-Muslim Danes attended the protest

"If the intention of this law was to protect women's rights, it fails abjectly," said Fotis Filippou, deputy Europe director of Amnesty International.

"Instead, the law criminalizes women for their choice of clothing — making a mockery of the freedoms Denmark purports to uphold," Filippou added.

Supporters of the law argue instead that the ban enables better integration of Muslim immigrants into Danish society.

With the ban, Denmark now joins Austria, Belgium, the Netherlands, Bulgaria, the German state of Bavaria and France, all of which have passed similar measures to curb face coverings.

The crackdown on Danish immigrant 'ghettos'

Denmark's center-right government plans to eliminate what it calls "ghettos" by 2030, in an attempt to integrate immigrants from largely non-Western countries. We spoke to people who live in a few of these "ghettos." (01.08.2018)

Dutch farmers feel they face an impossible pollution ultimatum: Sort it or sell up 14.07.2022

Farmers in the Netherlands are up in arms over plans requiring nitrogen pollution to be slashed. But why this sudden explosion of protest, and could it spread elsewhere?

Mali: Denmark to withdraw troops amid dispute with junta 27.01.2022

Danish troops are set to leave Mali after the military government made several calls for their "immediate withdrawal." It marks a further deterioration in Mali's relationship with the EU.