Hundreds gather in Stuttgart to protest coronavirus restrictions in Germany 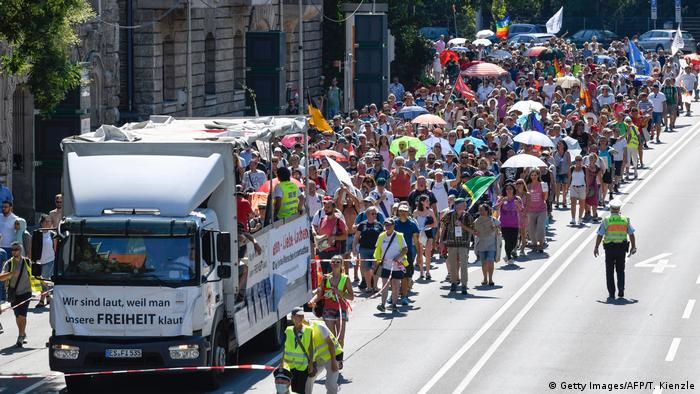 Around 1,000 protesters took to the streets in Stuttgart on Saturday to protest coronavirus-related restrictions.

Participants gathered in the Lower Schlossgarten in the city center, carrying umbrellas, displaying banners that said "With mask – without me" and chanting "freedom, freedom."

A total of 1,500 people registered for the rally under the"Lateral Thinking 711" initiative, while police estimate that the number of demonstrators present was closer to 1,000.

A police spokesman said social distancing measures were generally observed, but due to the high summer temperatures, such measures were not as carefully adhered to in shady places.

In a survey published on Saturday by the Forsa Institute, a polling company, for broadcast group RTL, only 9% of those questioned said they had sympathy for rallies against coronavirus measures.

The demonstrations were met with particularly strong rejection on the part of two age groups: 93% of those over 60, and 94% of 18-to-29-year-olds said they did not support the rallies. 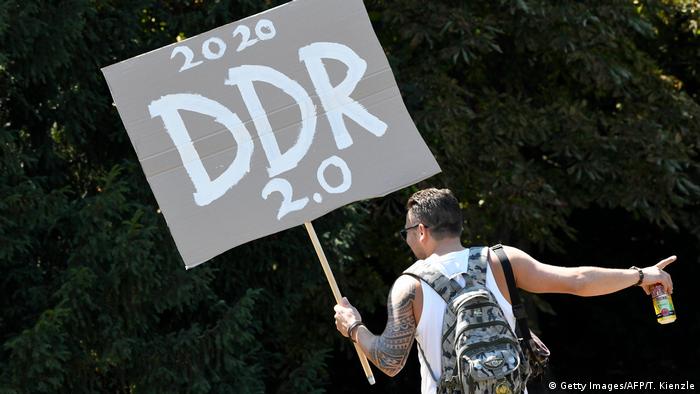 A man holds a banner reading "2020 GDR 2.0" during Saturday's demonstration against virus-related restrictions in Stuttgart.

'Not just the far-right'

According to the survey, the lack of sympathy is shared by supporters of almost all parties, with the far-right Alternative for Germany (AfD) party marking the most notable exception; 59% of AfD supporters said they welcomed the protests.

However, the President of the Federal Office for the Protection of the Constitution, Thomas Haldenwang, does not believe that demonstrations against the measurs have been dominated by extremists.

"Right-wing, but also some left-wing extremists have tried to instrumentalize the coroanvirus protests," Haldenwang told the Süddeutsche Zeitung. "They believed that people would rally behind them if they protested coronavirus policies. But that didn't work."

Read more:Opinion: Germany should not ban protests by coronavirus deniers

However, the right-wing extremists "staged themselves and stood in front of the cameras" creating a "false image" of the protests being dominated by the right. Instead, "all conspiracy theories of the world" are represented among those who resist the measures, he said.

Around 20,000 people in Berlin gathered on August 1 to protest virus-related restrictions. However, unlike Saturday's demonstrations in Stuttgart, social distancing measures were generally not observed and few protesters wore masks.

Germany has fared better than many of its European neighbors, with nearly 217,000 confirmed cases and over 9,000 deaths. However, health experts have warned that the country is entering a second wave of the virus.