Hundreds of civilians have reportedly escaped from a besieged jihadi stronghold in northern Syria. In a blow to "Islamic State" militants, a US-backed alliance has surrounded the town and cut off a main supply route. 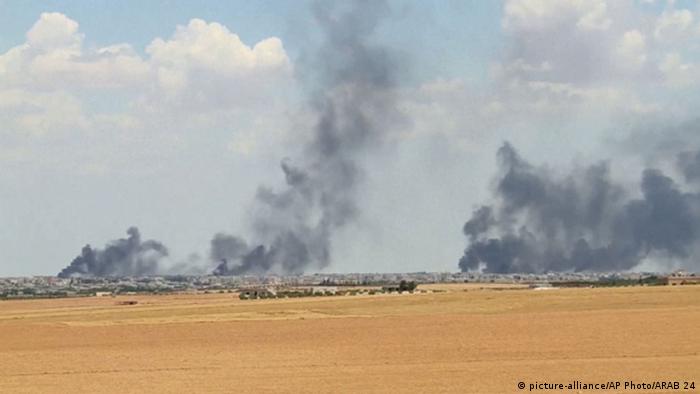 Around 600 civilians fled Manbij on foot before US-backed forces "transported them to safer areas," the Syrian Observatory for Human Rights said on Sunday.

The US-supported Kurdish-Arab alliance, known as the Syrian Democratic Forces (SDF), encircled Manbij on Friday, capturing dozens of villages near the Turkish border and severing a major supply route for "Islamic State" (IS).

The Britain-based Observatory, a monitoring group which gets its information from a network of sources on the ground, said that tens of thousands of Syrians were still trapped in the town, and that food supplies were running low. It said at least 223 IS militants and 28 SDF soldiers had been killed - as well as 41 civilians - since the US-backed offensive began at the end of May.

Heavy fighting was continuing to the north and west of the town on Sunday, as IS militants launched several counterattacks. Manbij has been under IS control since the group declared a caliphate in Iraq and Syria in 2014. The SDF siege has blocked a key supply route used to transport IS fighters, money and weapons between the Turkish border and the militants' de facto capital, Raqqa. 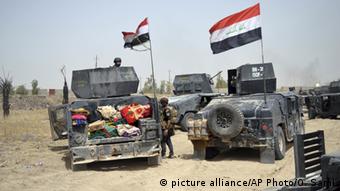 Iraqi soldiers push into the Fallujah neighborhood of Shuhada

Also on Sunday, at least 27 civilians were killed in a series of airstrikes by unidentified warplanes in the northwestern Syrian province of Idlib. The Observatory said that at least five children were among the victims, and that the death toll was expected to rise. It was not clear who carried out the raids, although the monitor group pointed out that Russian and Syrian planes had been flying over the rebel-held area.

Meanwhile, Iraqi soldiers advancing on the edge of IS bastion Fallujah on Sunday said they had secured the first safe exit route for civilians to leave the city. A Norwegian aid group quoted by the Reuters news agency said about 4,000 people had escaped the city in the past 24 hours.

The United Nations has raised concerns about the fate of up to 90,000 civilians believed to still be trapped inside the city with little food and water.

Iraqi soldiers are also pushing into IS-territory farther to the north as part of a larger campaign to take back Mosul. IS overran the city two years ago, and it remains the largest center under their control. Iraqi forces backed by US airstrikes marched towards Qayara on Sunday. The IS hub, a short drive south of Mosul, is home to an airfield which could serve as a staging ground for future operations to take back Mosul.

Syrians are growing increasingly desperate for food, with one report claiming people had traded a car for rice. The Assad regime has also denied aid requests for medical supplies, including burn kits and surgical tools. (11.06.2016)

Islamic State suicide bombers kill dozens in and around Baghdad

A pair of Islamic State suicide bombings around Baghdad have left at least 27 people dead. The blasts came as US-backed Iraqi forces press ahead with an assault on the IS stronghold of Fallujah. (09.06.2016)