An ongoing military operation with a round-the-clock curfew and a communications blackout has prompted allegations of human rights abuses in Kurdish-majority southeast Turkey. Augusto Fonseca* reports. 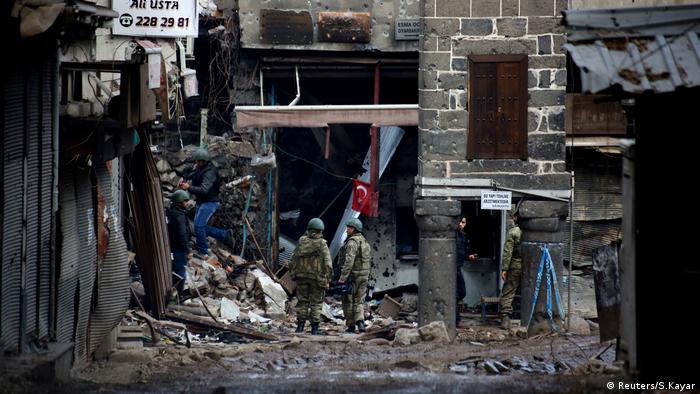 The helicopters arrived the night of February 11. By 7:30 p.m., soldiers surrounded Korukoy, a village in southeast Turkey, and began a surprise operation to capture militants linked to the outlawed Kurdistan Worker's Party (PKK).

Aysel S**., a 17-year-old student in Korukoy, watched through her window as soldiers with sniffer dogs stopped in her garden. They proceeded to raid her house and her oldest brother was interrogated on the spot.

"They smashed his head into the wall and kept yelling, 'They are here! You are hiding them! Where are you hiding them?'" Aysel told DW. "They continued hitting his head against the wall. My mother tried to stop them."

Since then, residents of Korukoy have reportedly been under round-the-clock curfew, restricted from leaving the village, where both electrical and phone services have been cut. A five-kilometer radius around Korukoy has been blocked off to traffic, with political delegations and human rights observers denied access to the village.

"For me, it was like living the apocalypse," Aysel said in a phone interview. "I thought my family and I were going to be killed."

Aysel could talk only because she was one of the few residents released from the village. Her mother had to be treated for a cardiac emergency as a result of the interrogations and they were allowed to seek medical attention in a nearby clinic.

The rest of the villagers are said to be sequestered as military operations continue with a communications blackout and sparse media coverage. Over the last week, images of mutilated bodies have appeared on social media accounts linked to Turkish Special Forces, spurring allegations of ongoing human rights abuses and triggering demands to allow independent observers into Korukoy.

According to a report, at least three corpses have been sent to a local morgue. If the allegations are confirmed, Korukoy residents may be witnessing a continuation of violence that has gripped southeast Turkey since the collapse of peace negotiations in 2015. 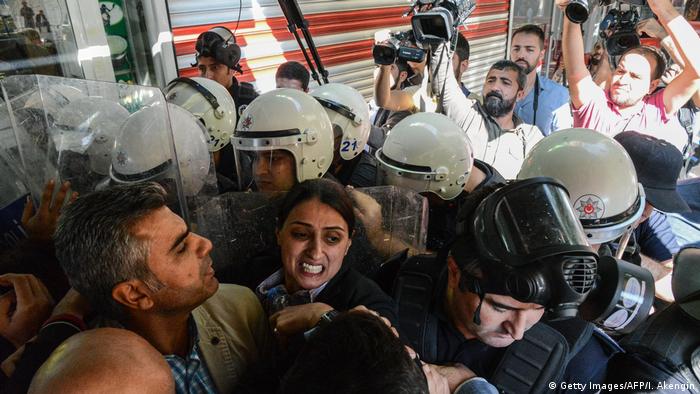 Feleknas Uca, an MP for the socialist, pro-Kurdish Peoples' Democratic Party (HDP) in Diyarbakir, was part of a delegation blocked from entering the village over the weekend. She said 65-67 families live in Korukoy. Considering rural families tend to be large, she estimated between 200-500 people are under curfew at the moment.

Uca said most Korukoy residents have had their cell phones confiscated and telephone service remains spotty in the village, but she has received intermittent messages from inside. Villagers told her they have been rounded up in the town square and beaten before being taken to a military compound for interrogation.

Amnesty: Almost half a million people forcibly displaced in Turkey

At least half a million people in southeast Turkey have been forcibly displaced by violence, large scale destruction and ongoing curfews. A new report has called on Turkish authorities to facilitate their return home. (06.12.2016)

The Turkish army has been accused of committing "mass murder" in the mainly Kurdish southeastern city of Cizre by the leader of one of the country's major political parties. Tom Stevenson reports from Istanbul. (12.02.2016)

HDP has appealed to the local government and Turkish parliament for further information on the curfew, releasing a statement on their website, but inquiries have so far gone unanswered.

"The government says they are doing this for the safety of people, but if this is for safety and there are no deaths [and] no torture, then why don't they let elected representatives or human rights organizations enter the village?" Uca told DW in a phone interview. "If no one is allowed [entrance], then what are [they] hiding?"

A statement published on February 18 by the Governor's office in Mardin, the district where Korukoy is located, said the operation was being conducted to "neutralize the terrorists, to find and destroy the shelters and warehouses they use" and "to arrest the collaborators who help them."

According to Andrew Gardner, a researcher for Amnesty International in Turkey, information about the Korukoy operation has yet to be confirmed, but the curfew is similar to those imposed on Kurdish-majority cities such as Cizre, Yuksekova, Diyarbakir and Nusaybin in 2015 and 2016. During these operations, Turkish authorities aimed to eradicate Kurdish militants from residential areas and civilians were caught in the crossfire.

"In previous cases, it was very difficult to establish the facts of the situation," Gardner told DW. "In the cases that we looked at … the people who died and sustained injuries included small children and people who were elderly and they were very unlikely to be involved in fighting." 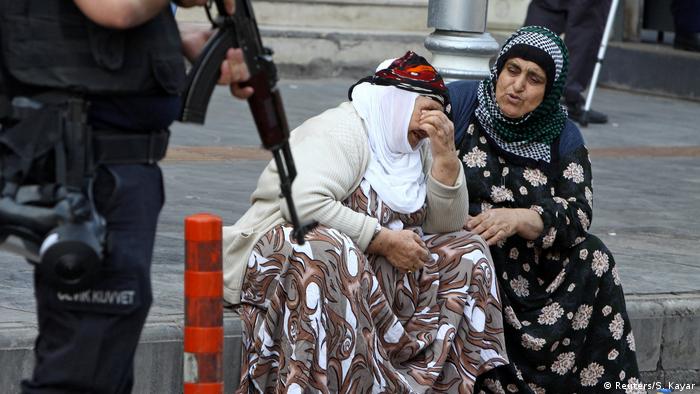 The situation for residents in Diyarbakir is becoming increasingly untenable

Citing reports of curfews in Cizre and Sur, a neighborhood in Diyarbakir, Gardner said the lack of impartial observers may "prevent human rights abuses from being uncovered in the future, let alone be prevented from taking place now."

"Certainly we saw a lot of evidence after the fact that the force was disproportionate, was reckless, and did lead to deaths and injuries," Gardner continued. "At the time, just as today in Korukoy, outside observers were prevented entrance and that's incredibly problematic given the allegations of human rights abuses."

Gardner also said Turkey's ongoing state of emergency promotes a culture among soldiers where abuses are expected to go largely unreported. Turkish armored vehicles are usually equipped with video cameras, but during investigations of past curfews, such recordings were not made available to prosecutors, and have yet to be released, Gardner added.

*This article is being published under an alias due to the sensitivity of the subject matter.

**Aysel S. was given an alias to protect her identity.