The Somali capital has been rocked by two blasts, with eyewitnesses reporting huge clouds of smoke rising above the city. One of the victims of the blast was a leading Somali journalist. 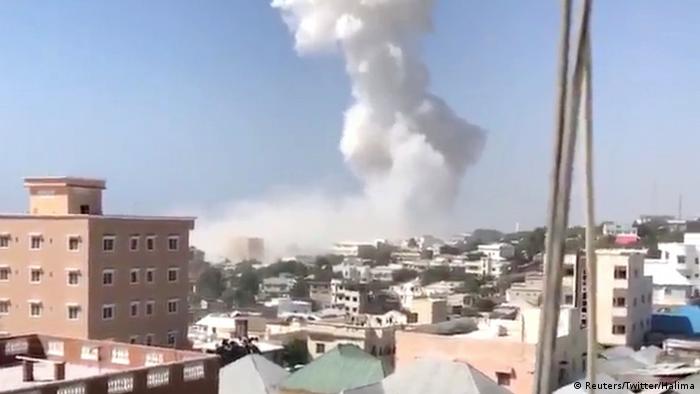 Police said a car bomb went off Saturday in Mogadishu's city center, followed by a second blast nearby.

The blasts, which occurred at or near a checkpoint about 400 meters (yards) away from the Somali president's residence, killed at least 16 people and injured more than 20.

"The first suicide car bomb at the checkpoint killed five people, mostly security soldiers. Four others were injured. Death toll may rise. It is too early to have details of second blast," Major Mohamed Hussein told Reuters.

Col. Ahmed Mohamud, another security official, told The Associated Press that Somali soldiers and civilians were among the casualties.

Later on Saturday, local press reported that Awil Dihar Salad, one of the country's most renowned journalists, was among the victims. He was known in the last few years as of the key figures trying to revive Somalia's media landscape.

Police said that government officials and lawmakers were near the site of the blasts.

At least 53 people were killed in a series of blasts in Mogadishu on November 10, a day after al-Shabab militants detonated four car bombs and attacked a popular hotel in the Somali capital.

Violence and lawlessness have spiked in the African country since dictator Muhammad Siad Barre's government was toppled in the early 1990s.