How the eurozone′s debt firewall will work | Europe| News and current affairs from around the continent | DW | 12.09.2012

How the eurozone's debt firewall will work

Germany's highest court has ruled that the ESM is constitutional, but it also named a few conditions. The 700 billion euro rescue fund is meant to be a firewall against bankruptcies. 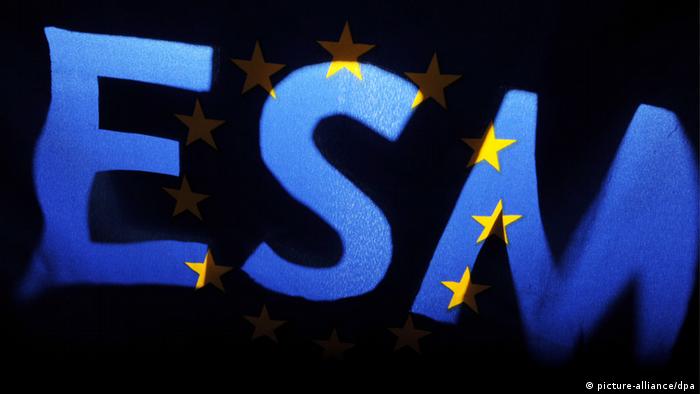 The European Stability Mechanism (ESM) has been designed to act as a kind of international financial institution, similar to the International Monetary Fund (IMF) in Washington.

At the moment the ESM exists only on paper. The treaty for setting up the ESM has been ratified by all of the eurozone member states, with the exception of Germany, and Ireland, which has only given a provisional green light and is waiting for a final ruling by the European Court of Justice on whether the rescue fund contravenes EU treaties. But, since Ireland guarantees only a small portion of the ESM's capital stock, its participation is not absolutely necessary. Germany, on the other hand, is set to provide 27 percent of the funding, which is why, after the German court ruling, ratification is expected quickly.

When 90 percent of the capital stock is made available by the contributing countries - that is, 630 billion euros ($814 billion) of the planned 700 billion euros - then the ESM would begin operating, although there is no set date for this to happen.

The head of the temporary European Stability Facility (EFSF), Klaus Regling, is supposed to become the managing director of the permanent rescue fund. The German finance expert is currently working on setting up the ESM in Luxembourg. 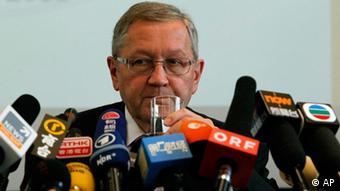 The EFSF's Klaus Regling may end up running the ESM too

Doubts about the size

Professor Patrick Sensburg, a member of the German parliament for Chancellor Angela Merkel's Christian Democrats, has closely examined the ESM. In his view, says the European legal expert, the ESM is a good firewall against the debt crisis.

"The ESM, together with the other solutions up for ratification and the fiscal pact, is a good framework so that we can get a grip on this situation."

There are doubts, however, whether the ESM is even big enough to finance potential future bailouts. The ESM does have more possibilities that the previous temporary EFSF, said the Brussels-based economist Yanis Emmanouilidis from the European Policy Centre think tank, but he added one caveat: 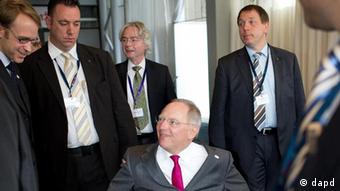 "The question that begs itself is whether the ESM is big enough to actually calm the markets," Emmanouilidis said. "I do not think it will, if the situation escalates in other EU states; in particular, Spain or even Italy."

On the other hand, the European Central Bank, theoretically, has unlimited funds. On September 6, it announced that it would purchase bonds from stricken countries, provided they asked for help from the ESM. The rescue fund and the ECB, therefore, would be working in parallel and coordinating their efforts.

The decision which eurozone country would get help is made by the ESM's Governor's Council. It is made up of eurozone finance ministers or their deputies. Germany, as the largest ESM shareholder with nearly 30 percent, cannot be overruled on the Governor's Council, said Sensburg, who is the chairman of the European Law Committee of the German parliament.

"Important for us, as the German parliament, is that we must give our approval ahead of all important decisions," Sensburg told DW. "This has been regulated in the ESM financing law, where it states that the German representatives in the Governor's Council may only give their assent for stability aid when the German parliament gives the green light beforehand (Article 13)."

The ESM members are jointly liable for any approved loans through their capital stock. Loans, as before, will be linked to provisions and conditions; in other words, countries that receive a loan must streamline their budgets and implement reforms in the financial sector or in their economic infrastructure. Unlike its predecessor, the EFSF, the ESM can directly purchase government bonds of financially strapped countries. That means it can intervene relatively quickly in financial markets.

The ESM is a bank

At the moment it is not planned that the ESM borrow funds from the European Central Bank and then distributes them to needy countries. If it had such a banking license, the ESM would be able to mobilize much larger sums.

"It is entirely possible that the ESM could borrow capital from financial markets, banks or other entities to meet its needs," Sensburg said. "We don't want that because we think that the loan volume of 500 billion euros is really enough. It is just not on that the ESM would go this route to access a higher volume bit-by-bit and the signatory states would be liable for it."

However, it would be legally feasible for the ESM to use a banking license to expand its volume. This last mechanism could be used at some point, said Emmanouilidis of the European Policy Centre. "I think when the point is reached where the markets need to be placated further then this option could possibly be used. Whether it is ultimately a cure-all – I don't think so. I think that in the current situation only a mixture of different elements will be the right recipe in the end," says Emmanouilidis.

To gird against possible loses, the eurozone states have declared that the repayment of ESM debt in future must have priority; that is, priority over government bonds purchased by private investors in Greece, Spain or Italy.

Finance experts are concerned, however, that such a move would scare away private creditors from these bonds and that the costs for these bonds would increase rather than sink. Furthermore, eurozone government bonds in future would contain a clause stipulating that private investors would have to participate in any debt cancellation measures should they arise - a move that would make government bonds even less attractive for investors.

The temporary EFSF rescue fund will operate parallel to the permanent ESM until July 2013. Of the 440 million euros originally available, some 240 million still remains – a sum that could be used, for example, to rescue Spain's ailing banking sector.

Economists doubt the value of the EU fiscal pact

For some, the EU's fiscal pact is German Chancellor Angela Merkel's biggest crisis-managing achievement. Others say it runs foul of the constitution. Many economists also aren't convinced, but for different reasons. (26.06.2012)

Germany is ceding more and more power to the EU. But how far is that compatible with the German constitution? Now senior politicians are proposing a referendum to change Germany's Basic Law. (26.06.2012)