How the Catholic Church ties in to Poland′s judicial reform | Europe | News and current affairs from around the continent | DW | 24.07.2017

How the Catholic Church ties in to Poland's judicial reform

The row about the planned reform of the judiciary in Poland is religiously charged. It exposes the close relationship between the ruling Law and Justice Party (PiS) and the country's conservative clergy. 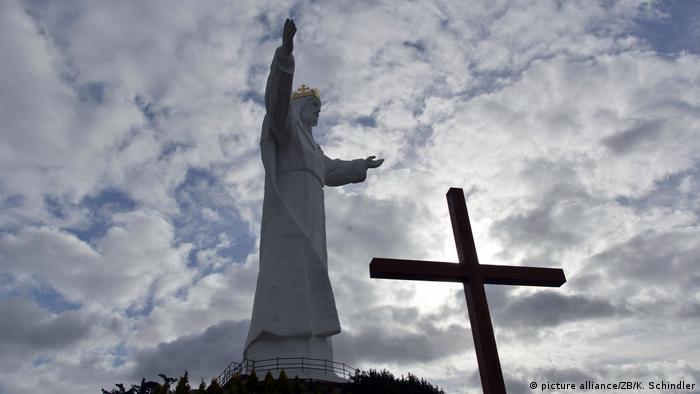 Is Poland's controversial judicial reform, which tens of thousands have taken to the city streets to protest, compatible with the Catholic faith? This may, at first glance, seem like a politically irrelevant question. For Poland, though, it is of existential importance – because the Catholic faith is a key element of Polish identity.

But which Catholic faith are we talking about? The national-conservative government of the Law and Justice Party (PiS) certainly does not seem to adhere to the Catholicism of Pope Francis, with his compassion for refugees – this despite the millions of believers who cheered the pontiff at World Youth Day in Krakow in July 2016. 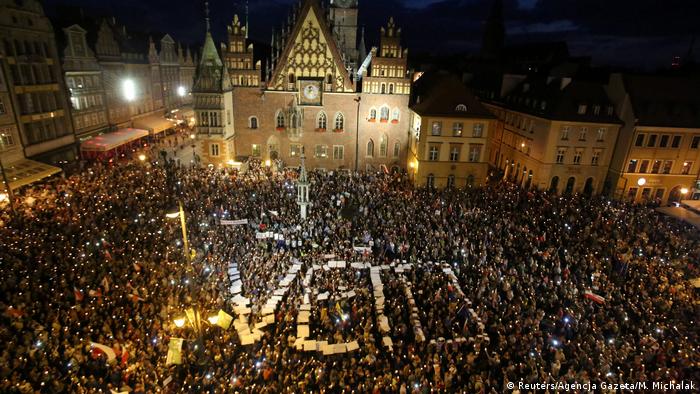 Across Poland, tens of thousands of people have been protesting against the reform

Nor does theirs seem to be the Catholicism of Pope John Paul II, who was revered as a saint in his native Poland long before he was declared one in 2014. After all, he stood up not only against Communism but also, vehemently, for freedom and democracy. His comment that Europe must "breathe with both lungs," both East and West, is still frequently quoted.

The Church is silent

Yet relations between the PiS and the Polish Bishops' Conference seem particularly close. On July 17 the Conference's spokesman, Pawel Rytel-Andrianik, announced that the church would not be commenting on the row about the judicial reform. Three days later, on July 20, confronted by mass protests, Archbishop Wojciech Polak called for the "preservation of the fundamental principles of the democratic constitutional state."

A feeble gesture, according to Malgorzata Gersdorf, the president of the Polish Supreme Court. Gersdorf was appointed in 2008 by the former head of state, Lech Kaczynski. "The only institution that could still achieve something in Poland is the church," she told Germany's Süddeutsche Zeitung. "But I don't expect anything of it. It's closely associated with the ruling party. That's why it has said nothing up to now, and won't say anything." 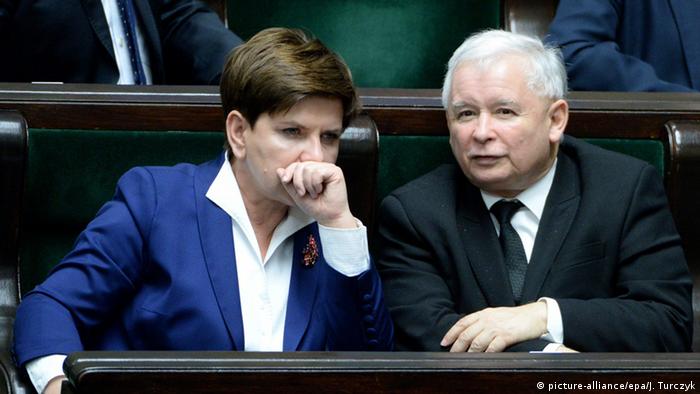 Silence is paying off for Poland's Catholic Church. The PiS government has increased state subsidies for the church. It has placed greater emphasis on voluntary religious education in schools, and has issued a parliamentary decision blocking access to "morning-after pill" emergency contraception. It is also tireless in its efforts to tighten the country's already restrictive laws on abortion.

The Catholic commentator and political scientist Andreas Püttmann believes that there is something "structurally Catholic" behind the justice reform the PiS is trying to push through: "Legitimization [of the reform – Ed.] does not come about by way of a regulated process, but by the concordance of political events with a higher truth, embodied by oneself," he recently explained on Cologne's Domradio station.

"This, unfortunately, has tradition in Catholicism," he added. "We see it, for example, in the 19th century, when the popes railed against democracy and human rights [...] Mr Kaczynski and his political friends are part of this tradition."

Poland as the "bulwark of Christianity," the home of the "Millennium Pope" John Paul II – it's an outlook the Polish Bishops' Conference and the PiS government have in common. They feel they must defend themselves as much against the secularization of the West as against the supposed proliferation of Islam. 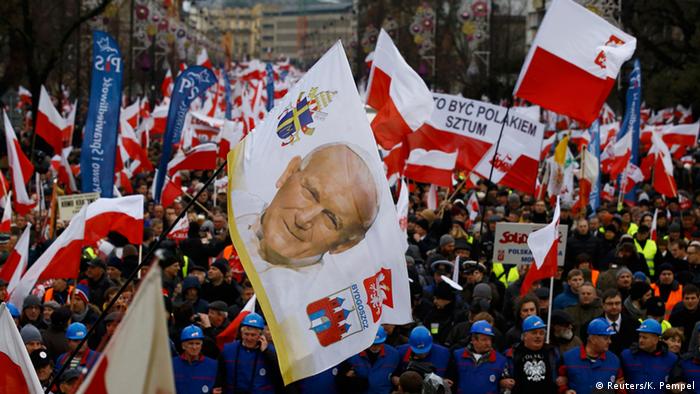 Thy will be done? PiS supporters often invoke Pope John Paul II at their rallies

The Polish PiS government is still succeeding in presenting itself as both the protector of the Catholic Church and the defender of the national identity. However, more than 25 years after the fall of the Berlin Wall it too is losing influence. According to a study analyzed by the Polish commentator Jan Opielka in the Zeit newspaper supplement "Christ & the World," the number of Polish men and women living according to the precepts of the Church has fallen, from 66 percent in 2005 to 39 percent today.

According to this study, only one in two Poles regularly observes Catholic rites. More than 50 percent profess to believe "in their own way." In 2005 it was only one in three. The number of non-believers has also risen, from 6 to 15 percent among 18- to 24-year-olds.

Read: 'Somebody has stolen Poland and its values'

"An authoritarian party, Jaroslaw Kaczynski's 'Law and Justice' has shaken hands with fundamentalist Catholicism," the theologian and former Jesuit priest Stanislaw Obirek commented as early as last year, in an interview with the German state broadcaster MDR. The church, he said, had become a political player.

Although the chair of the Polish Bishops' Conference, Archbishop Stanislaw Gadecki, supported Pope Francis, the majority of the Polish clergy were conservative and openly urged people to vote PiS, Obirek said. The theologian's assessment was that "it was only through the submissiveness of all political parties towards the church that we ended up with the political situation we have in Poland today."

Poland's judiciary conundrum: Where is the resistance?

New judiciary reforms in Poland will undermine the rule of law. Why is the country moving towards a new dictatorship, and where is the resistance? DW's Jan Pallokat reports from Warsaw. (21.07.2017)