As this season of Germany's Next Topmodel comes to a close, we look at how Heidi Klum's impressive career has allowed the German-born supermodel to become a global star and powerful businesswoman.

Working both in her home country and in the US, Heidi Klum is one of the world's most successful celebrities. Her impressive career as a model has allowed her to venture into lucrative business and entertainment projects, and she shows no signs of slowing down at age 44.

"There aren't many world stars coming from Germany with that level of fame. It's Angela Merkel and Heidi," Thomas Hayo, a fashion photographer and one of Klum's judges on Germany's Next Topmodel (GNTM), told Forbes magazine last year.

Since 2006, millions of mainly young female viewers have been watching Heidi Klum host Germany's Next Topmodel on commercial TV channel ProSieben. The reality TV show is based on the original America's Next Top Model, which her friend and fellow model, Tyra Banks, started in New York City in 2004. 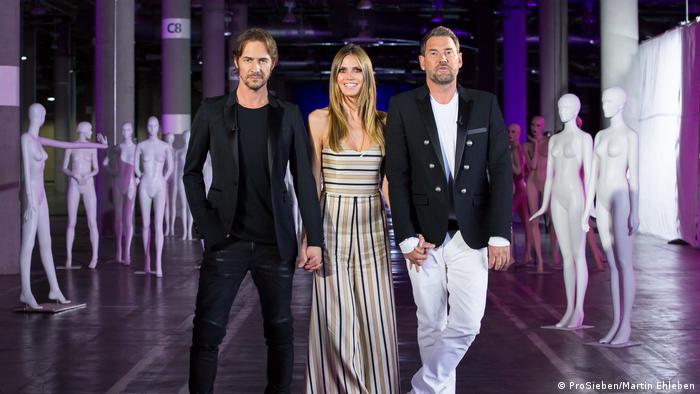 Earning $21 million in 2017, Klum is the only German-born star among the world's top 10 highest-paid TV hosts, according to Forbes magazine

As the central figure of the show, Klum makes it clear when she disapproves of a candidate's efforts, but will show her beaming, signature smile when a model performs well.

On May 24, during a live broadcast in Düsseldorf — near Klum's hometown of Bergisch Gladbach — Klum and her two fellow judges, Hayo and the German fashion designer Michael Michalsky, will choose this season's winner.

"I think most of the German people honor and admire Heidi's professionalism and huge success. They are proud of our only worldwide TV star," Michalsky told DW.

"Heidi Klum has the image in Germany of the smart business woman. She's both self-confident and witty: the perfect host for Germany's Next Topmodel. She represents success and discipline," points out Franziska Frosch, Deputy Editor-in-Chief of ELLE Germany, who argues that Klum embodies the stereotype of the self-made woman. "If you believe Heidi Klum, it's not so much a gift from heaven that makes you attractive, but rather the result of hard work, self-control and personal evolution," Frosch told DW.

However, Klum's popular TV show is also widely criticized, for instance for the fact that models are never to question her decisions: "Germany's Next Topmodel isn't harmless entertainment, but rather sends a political message: The ideal is to be powerless, in total submission to authority," wrote German national newspaper Frankfurter Allgemeine Zeitung in a review of the current season.

It's not just Klum's professional projects that the German media scrutinize. "Despite all her perfection, her turbulent love life surely makes her entertaining and approachable. Again and again, her presence in the tabloids certainly generates sales," Franziska Frosch said.

To this day, Klum's love life is a theme of constant fascination. She made headlines by showing up in Cannes with her new boyfriend, Tokio Hotel guitarist Tom Kaulitz, aged 28. Before Kaulitz, Klum was dating Vito Schnabel, an art curator 13 years her junior. In the past, she was married to the singer Seal, with whom she shares three biological children; the musician also adopted Klum's first child.

Klum had her start in 1992 through a German modelling competition, landing on the covers of the international editions of fashion magazines. She caught the American public's eye when she appeared on the cover of the Sports Illustrated swimsuit issue in 1998, and became the first German model on Victoria's Secret Angels' prestigious line-up.

Klum leads a true trans-Atlantic life. When she isn't working on GNTM or on her fashion line with German supermarket chain Lidl, she acts as a judge on two American TV shows.

Since 2004, Klum has served on the panel of Project Runway, a cult hit reality TV series, where budding fashion designers compete against each other in a series of weekly challenges. She also has a producer credit on the show.

Klum has been one of the original judges since its inception, with "Auf Wiedersehen" serving as her famous catchphrase to bid farewell to the losing contestants. Similar to her GNTM persona, she is direct with her criticism and earnest, yet exudes warmth and encouragement. Since 2007, Project Runway has been consistently nominated for a Primetime Emmy Award for Outstanding Reality-Competition Program.

Up until 2017, Harvey Weinstein was an executive producer for the show, and Klum opened up about how he lost that credit since the sexual harassment and assault accusations surfaced. "I truly admire these brave women who are coming forward to share their stories because change cannot come unless there is a dialogue and people are held accountable," Klum told People magazine.

Klum also participates in determining the fate of contestants on America's Got Talent. As one of four judges on the panel, Klum's down-to-earth and girl-next-door personality comes through when delivering her feedback.

'Do we have an expiration date?'

With her feet firmly planted on both sides of the Atlantic and jet-setting around the world, Klum remains a force in fashion and media, while also balancing motherhood with her busy life.

And if any of her followers wonder if she is about to disappear from the spotlight, fear not. She discussed modelling her own lingerie line on Ellen Degeneres' show a few months ago: "Sometimes people say, 'You're 44, you're turning 45. Why are you not giving the baton to someone else?' But I always think there are a lot of women my age, 50, 60, 70. What? Do we have an expiration date? Can we not also still feel sexy? I feel sexy."

According to her legion of international fans, she definitely still is.

In her home country, she's the central authority of the reality show Germany's Next Top Model, while in the US she has been a main judge on Project Runway since 2004. (24.05.2018)